The Scotsmen Who Invented Modernity 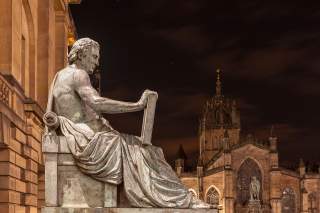 drink nothing but Nectar, breathe nothing but Incense, and tread on nothing but Flowers. Every Man I meet, and still more every Lady, wou’d think they were wanting in the most indispensable Duty, if they did not make to me a long & elaborate Harangue in my Praise.

The most fateful acquaintance that Hume made in Paris was in December 1765 with Jean-Jacques Rousseau. Baron d’Holbach warned Hume that “you are warming a viper in your bosom.” In an instance of flagrantly bad judgment, Hume ignored the warning and invited Rousseau to return with him to Great Britain. Rousseau, who was, to borrow from Donald Trump’s lexicon, something of a nutjob, soon turned on Hume, accusing him of spearheading an international conspiracy to traduce his reputation. In a thirty-eight-page epistle, Rousseau said, among other things, that Hume’s charitable acts on his behalf were simply a ruse to win control over him. Smith warned Hume not to respond: “To write against him, is, you may depend upon it, the very thing he wishes you to do.” Hume ignored this sage advice and wrote a pamphlet that sought to vindicate his name. After Rousseau departed England for Calais, Smith asked, “What has become of Rousseau? Has he gone abroad, because he cannot continue to get himself sufficiently persecuted in Great Britain?”

By now, Hume had decided that his book-writing years were over “because I’m too old, too fat, too lazy, and too rich.” It was Smith who earned widespread acclaim with The Wealth of Nations in 1776. Rasmussen emphasizes the intellectual contribution that Hume made to Smith’s thinking about political economy. He notes that Smith’s claim that commerce helps to promote personal liberty and security and abate the prospect of strife, as well as the case for the merits of free trade, was anticipated by Hume. The idea that trade is a zero-sum game, Hume thought, was bunk. Rasmussen rightly notes that in his essay “Of the Jealousy of Trade,” Hume declares that he prays for the prosperity of Germany, Spain and “even FRANCE itself.” Both Hume and Smith were also opponents of colonial adventures, with Hume noting that “extensive conquests, when pursued, must be the ruin of every free government,” and Smith concluding The Wealth of Nations with a ringing condemnation of the fiscal folly of imperialism. At the same time, Smith was definitely more alive to the shortcomings of commercial society than Hume. He condemned the “mean rapacity” of merchants and their propensity for collusion for personal gain. According to Rasmussen,

Even as Smith agreed with Hume that the benefits of commercial society—liberty, security, prosperity, and the rest—vastly outweigh the costs, he was far more willing to acknowledge that there are costs involved, and to seek ways to ameliorate them.

Unlike Hume, Smith’s death in 1790 excited little attention. The obituaries that appeared tended to cast aspersions upon Smith: the Times, for instance, took a swipe at him for having “published such a labored eulogium on the stoical end of David Hume.” Consistent with his modest personality, he only had a small tombstone, tucked away in a corner of the Canongate Kirkyard.

But he may have exercised an even more decisive influence on modern liberal thought than his lifelong friend. At a moment when enlightenment values are once more under assault from within the West, their work has acquired a fresh relevance.

Image: Statue of Scottish Philosopher David Hume (1711 to 1776) by Alexander Stoddart at one of the prominent landmarks on the Royal Mile in Edinburgh, Scotland.​ Wikimedia Commons