The Scottish Independence Question: A View from America 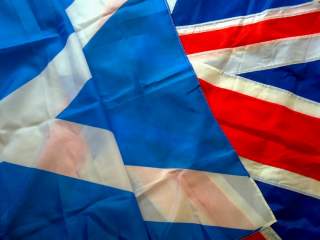 I suppose Scots, expats such as myself included, should feel gratified by the growing chorus of influential outsiders weighing in on the looming vote on Scottish independence. Most of these are urging a “No” vote on September 18. Carl Bildt, the former Prime Minister of Sweden, sees the prospect of Scots’ independence as a possible beginning of “Balkanisation of Europe” (a particularly evocative phrase in the year marking the 100th anniversary of World War One); and the historian Simon Schama, writing in the Financial Times under the evocative headline, “A splendid mess of a union should not be torn asunder”, goes on to lament that “Scotland’s exit from the rich, creative and multicultural unity of Britain would be a catastrophe”.

Such hyperbole is reflective of a paradox in the strategy of the “No” camp, one that has seen the course of history reversed. In the past, charges of “emotion-over-reason” have traditionally been leveled at the nationalist cause, which was characterized as being all Braveheart and claymores. What we see now is a clear contrast between the patient, calm-waters exposition of how an independent Scotland can and should hold its own—economically and politically—and the fever-pitch narrative of the pro-union forces. These have ranged from UK Chancellor of the Exchequer George Osborne’s “sermon on the pound”, to Lord George Robertson’s extraordinary presentation at the Brookings Institution in April, in which he compared a vote for an independent Scotland to the ongoing crisis in Ukraine. Then there was the warning from the outgoing European Commission president Jose Manuel Barroso that an independent Scotland might have “great difficulty” in securing EU membership (Really? Slovenia, Estonia and Bulgaria, but not Scotland!?) Throw into the mix the eleventh-hour blandishments from Prime Minister Cameron—commitment to further devolution in the event of a ‘No’ vote, including concessions on tax collection—and what we see from the “No” campaign is an odd blend of cajoling and bullying, of carrots and sticks. This is an odd approach, because these are tactics on which Scots tend to push back, and which seem unlikely to win their hearts and minds.

More recently, James Gallagher weighed in on the side of the “Better Together” campaign in these columns (“Scotland’s Nationalist Folly”, National Interest, June 26). Regrettably, he begins by taking an ad hominem swipe at the leader of the Scottish National Party, Alex Salmond—“a self-confident, popular and utterly disingenuous rogue”. Setting aside the question as to whether self-confidence and popularity are disqualifiers for high political office, there is the clear implication that the First Minister is some kind of tactical, flag-waving opportunist. This is unfair and untrue: as the Scottish poet and scholar, Robert Crawford, recounts in his magisterial new book, “Bannockburns”, Salmond, as a student at the University of St. Andrews in the 1970s, was steeped in, and greatly influenced by, a tradition of pluralist nationalism that was born in the St. Andrews of the 1930s, in conscious opposition to growing European fascism. As Crawford concludes: “[Salmond] has gone on to champion in the twenty-first century a pluralist version of Scottish independence.” A final point, and an obvious one: this is not your run-of-the-mill election; it is a historic moment for Scotland, one in which the people of Scotland [yes, English, or residents of any origin may vote; I may not] are voting for a nation to have its country, not for an individual. Scotia longa, Salmond brevis.

Next, Gallagher makes the astonishingly inaccurate claim that “Back in January 2012, the British prime minister, David Cameron, worried by the growing dominance of the SNP, announced that he wanted Scotland to be given the choice between continued membership in the United Kingdom and full independence”. As one reads this, it is as if it were Cameron’s idea to hold the vote on independence! Moreover, what Gallagher does not include in this counterfactual account is that Salmond and the SNP proposed that a third option be on the table, the so-called “Devo Max” option, which would grant much deeper devolved powers to Edinburgh, especially in the area of taxation. Cameron—presumably confident of a favorable outcome—refused.

I will not dwell on the “economic viability” debate. Gallagher accuses Salmond and the Scottish government of a roseate presentation of a post-independence economy (a politician putting the best possible spin on economic forecasting—surely not, would never happen here!). But it seems self-evident that if fifteen new European states added after the end of the Cold War can survive as independent states, then Scotland surely can. Indeed, the “No” forces have of late switched their ground from arguing this question. Rather than the “could’ question on independence, I’ll focus on the “should”, and advance three reasons for voting “Yes” in September.

For the first, back to Simon Schama, who offers a litany of achievements by Scots during the 300 years of the Union—in the arts, sciences, philosophy, architecture, politics et al. Quite so, yet his allusion to these achievements surely emphasizes Scotland’s capacity for independence. Another wise man, the Canadian politician and public intellectual Michael Ignatieff, also offered the opinion that Scots should be mightily content with the status quo since so many had found fame and fortune in London. However, we might ask, first, why Scots should have to go to London to accomplish such? We might also question the implication that Scots would somehow desist from going to London should Scotland become independent—that traffic of people, goods and ideas would suffer terminally from a “Yes” vote? And why should not there be a more robust, south-north flow of resources, intellectual and otherwise—Aberdeen is already the most prosperous energy-industry center in the world outside Houston.

Secondly, the whole notion of “Better Together” carries the implication that the state of togetherness in the United Kingdom is all sweetness and light. This is not so. Increasingly, over forty years of living in the United States, I have had to retreat from the confident assertion of early years of exile that certain fundamental public services in the UK were superior to those across the Atlantic—namely education, transportation and (at least for the lower-income stratum) healthcare.

Now, on the basis of regular visits home, it is clear that if the social contract in Britain is not, to use Schama’s language, “torn asunder”, it is perilously frayed. This is due surely, and in no small part, to a process that is as inexorable as it is distasteful—the shift of power, influence and wealth to London and the Southeast of England, a process that began in the Thatcher years but has continued unabated, even under two UK Prime Ministers who were Scots! Simply put, London sucks the oxygen out of the rest of the UK. (It is significant to note, by the way, that by most economic indicators, Scotland outperforms the rest of the UK outside the hungry maw of the metropolis.)

This leads to the third and most compelling factor that would advocate a ‘Yes’ vote. In the preface to the compendious report on independence, Scotland’s Future, Salmond writes: “Our national story has been shaped down the generations by values of compassion, equality, an unrivalled commitment to the empowerment of education.” This reference to compassion leads me back to the matter of the erosion of the social contract: as the son of a nonagenarian mother under excellent care in Scotland, I can testify to the fact that Scotland has a social-democratic conscience, a tax and spend on social services commitment that is far from the mentality of what was recently and famously described as the “madcap capitalist laboratory” of London.

Without dipping too far into the waters of partisan politics, it is not coincidental that Scotland has but one representative of the ruling political party in Westminster. As for the other major political party, Labour enjoyed hegemony in Scotland for decades before the rise of the SNP. As a youthful Labour Party activist in Scotland, I agreed, recently and regretfully, with the succinct summary of the Labour legacy in Scotland by Andrew Wilson in the July 24 edition of The Scotsman, the national newspaper (“If we want things to improve, why wait?”): “I longed for more ambition for the country I was from and the people I grew up with. Well-intentioned managed decline never struck me as enough.”

The widening schism of political culture we see between north and south is all the more evident in the disproportionately greater success of the far-right United Kingdom Independence Party in recent European elections in England, as opposed to the gain of one miserable seat in Scotland. Do we Scots truly see ourselves as being in sync with a party that speaks for some 30 percent of England in wishing to turn its back on Europe (Scotland is perennially the most pro-Europe part of the UK)? Indeed, in looking at the broader European picture, we should consider seriously the implications of voting “No” when we know that David Cameron is committed to a “stay or go” vote on Europe in the next Parliament, and has just thrown a bone to his anti-EU base by naming a hardened Euroskeptic as foreign secretary. Do Scots wish to be any part of a political culture of ugly xenophobia, as exemplified in the comments of a UKIP MEP who asserted: “How we can possibly be giving one billion pounds a month to Bongo-Bongo Land is completely beyond me”? Ironically, even as they take it on the chin for outmoded separatism, it is the Scots who wish to retain membership in an alliance of twenty-eight states and 508 million citizens.