The Search for Crime and Justice on America's Indian Reservations 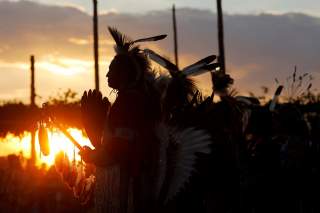 New Mexico is quietly wild. Its multicolored sunsets, volcano-pocked terrain and unique cultural landscape attract tourists, inspire artists and mask its dark side. After all, one of the perks of the sparsely populated state is that it's wide-open spaces offer a makeshift sanctuary to those who seek isolation and freedom, but with that magnitude of freedom comes the danger of believing that the day-to-day social and legal restrictions that govern society no longer apply. Anything seems possible under the desert sun, and many people have gone out of their way to test that theory.

Crime in the desert is like a flower on a cactus. It flourishes in unexpected places. It is not easily beaten back by brutal or unexpected elements. It does not shy away from the brink of extinction or the occasional danger.

It is difficult to kill.

This has sometimes been a harsh reality for the sprawling territories that are governed by the state’s twenty-three Indian tribes.

New Mexico is no stranger to unusual crimes, so it is unlikely that authorities were shocked when they caught Loren Lloyd Wauneka and Lisa Benally stealing jewelry, furniture and firearms from a law-enforcement officer’s residence on the Navajo Nation reservation in January 2016. Both had criminal histories. Wauneka was convicted of the crime and sentenced to thirty-seven months in prison followed by three years of supervised release, according to an August 10 Department of Justice press statement. Benally is still awaiting her day in court. She faces ten years in federal prison.

New Mexico’s desert neighbor Arizona shares a history of shocking criminal activity. For example, in September 2016 twenty-three-year-old Ashley Attson put her seventeen-month-old daughter in a stroller and pushed her out into the desert. She left her baby there for four days and nights, according to an August 1 Department of Justice statement. When she returned, she put the dead child in a trash bag and buried it in an animal hole, the statement shows.

Justice officials began taking extra steps to reduce the level of crime on reservations in 2015 via the Tribal Access Program, which provides tribes with access to federal crime data so that they can easily identify bad actors in the community.

Crime in Indian country had been steadily growing in the years leading up to the implementation of the program. Data compiled by the Department of Justice’s Bureau of Justice Statistics shows that Indian country jails were home to 1,775 inmates in mid-2000. Half a decade later and that number had shot up by 29 percent. By mid-2015, just a few months before Justice officials publicly announced that it had selected tribes to participate in its user-feedback phase of the program, the number of people inside those Indian country jail cells had increased to 2,510, according to a bureau report.

Ten tribes initially participated in the user-feedback phase and an additional eleven tribes took part in the department’s 2016 program expansion. New Mexico is home to two of the tribes touted in that expansion plan: the Navajo Nation and Pueblo of Laguna. Now, the department has announced its intention to expand the program again.

Through the program, Tribal Public Housing can conduct a fingerprint background check on people who could pose a danger to the community, such as prospective employees and prospective tenants receiving housing assistance. A tribe’s Child Protective Services and Children’s Social Services also have access to the same research method. These are just some of the data-sharing opportunities offered by the Department of Justice.

But it’s not a one-size-fits-all operation.

Pueblo of Laguna officials discovered this year that the federal-data project didn’t work for them.

The pueblo was named as one of the 2016 participants, but it never fully participated in the program, according to Pueblo of Laguna Public Safety Department Director Jesse Orozco.

“We started the process, but it didn’t work out for us,” he said.

The pueblo already had access to everything the Tribal Access Program had to offer through a state partnership, Orozco said. Pueblo officials were interested in using the Justice program for noncriminal purposes, such as screening prospective employees, but Justice officials wanted them to commit to using the program for criminal purposes too, he said. Unfortunately, complying with that federal requirement would have created duplicate work for the pueblo and after several discussions about data issues with various Department of Justice personnel, the pueblo called it quits in early 2017, he said.

“It got real complicated,” he said. “Eventually, for us, the best thing to do was to just back out of the program.”

“The federal approach” is usually a one-size-fits-all, take-it-or-leave-it deal, which may not seem very appealing to tribes that already have successful cooperation agreements with state officials, University of New Mexico Law School Professor Kevin Washburn said.

Both Orozco and Washburn—a former New Mexico federal prosecutor who is familiar with criminal law, gambling law and Indian law—commended the Department of Justice for its efforts to help tribes across the country track and reduce crime. There are 566 federally recognized Native American tribes in the United States, and not all of the tribes have a good working relationship with state officials.

“Often the state is not cooperative and DOJ is your only choice,” Washburn said. “Sometimes the DOJ has grant programs to give you resources to implement various activities.”

Direct costs associated with the Tribal Access Program are purported to be minimal. The tribes must pay for high-speed Internet access and there are sometimes expenses associated with training people to use the database, according to a department statement.

The Department of Justice has made multiple efforts to connect America’s tribes with federal crime information databases. It is unknown whether the department has had abundant or fleeting success combating crime on tribal land—or even in New Mexico. Also, it is unclear how many tribes have quit the Tribal Access Program because it simply didn't meet their needs. At the time of publication the department had not provided comment on the program, and the Navajo Nation did not respond to questions about whether it had a successful experience working with Justice officials.

Still, the department’s efforts to combat crime have not been fruitless.

“Tribes are really trying to become full citizens of the American law enforcement community, and they have been having to do the job with one hand tied behind their back because they haven't had access to the information that other law enforcement have, so the TAP program is definitely a step in the right direction.”