The Secret to Better U.S.-Turkey Relations 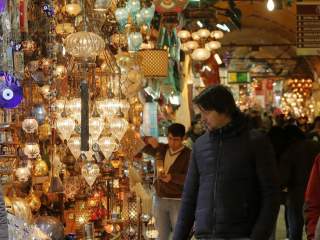 For the United States, the recent meltdown in Turkish-Russian relations creates an opportunity. After Turkey shot down Russia’s warplane on November 24 and Moscow imposed sanctions on Ankara, U.S. and Turkish businesses are now in a position to sell to each other what the Turks can no longer trade with Russia. Washington could leverage the prospective increase in U.S.-Turkish commerce to bring its NATO ally back into the Western fold.

Some might question the wisdom in using trade to improve diplomacy with Turkey before Turkish leaders recommit to democratic reforms or double down against ISIS in Syria. But that would miss one big point: U.S.-Turkey relations traditionally have mirrored their trade ties.

As Turkey’s economy grew during the previous decade, U.S.-Turkish trade expanded from $6.5 billion in 2002 to $20 billion in 2011. Simultaneously, Turkey’s democratic standards improved and relations between Washington and Ankara recovered from the aftershocks of the Iraq War.

These advances led President Barack Obama in 2009 to call for a “model partnership” that would transcend the longstanding military-political partnership between the two countries. Despite the optimism, however, the deterioration of domestic conditions in Turkey, along with the tumult of a post–Arab Spring Middle East, drove Ankara and Washington apart.

Today the troubles facing U.S.-Turkish relations are serious and complex. Washington’s desire to focus on ISIS does not comport with Ankara’s “Assad first” strategy. The recent flare-up in fighting between Turkish government forces and the militant Kurdistan Workers’ Party has undermined efforts to end the Syrian nightmare. Perhaps the most hurtful development has been the normalization of anti-American and anti-Turkish rhetoric among members of each country’s political elite.

Trade could break that tie. Not only is Turkey a lucrative trading partner with its population of seventy-five million people, but it sits in the heart of a $25 trillion market that straddles Europe, the Middle East, Africa and Central Asia. Turkish imports are forecast to grow by 9 percent annually through 2018, presenting a great opportunity to American exporters. A 2014 study by the Union of Chambers and Commodity Exchanges of Turkey and the U.S. Chamber of Commerce points out that an uptick in U.S.-Turkey trade could create billions of dollars of wealth and tens of thousands of jobs on both sides. Aside from traditional U.S. exports to the NATO ally in defense and aerospace, and Turkish exports to America in chemicals, cement, machinery and agricultural produce, the two countries have much to offer each other in finance, information/communication technologies, tourism, healthcare and energy.

But both sides have a lot of homework to do before they could increase trade. Turkey especially needs to undertake serious reforms. U.S. Commerce Secretary Penny Pritzker pointed out in 2014 that Ankara must overhaul its rule of law, public tender processes and laws on patent and intellectual property to instill confidence in international investors. U.S. companies are also worried about Turkey’s insistence on localizing production in several sectors, which inhibits imports and the country’s integration into the global value chain. Finally, the Turkish government’s pressure on media outlets, as well as questions concerning the independence of the judiciary and the central bank, worry U.S. investors.

There is reason to be optimistic on that front. On December 10, the new government under Prime Minister Ahmet Davutoğlu announced an ambitious “action plan” that promises serious reforms to improve the economy and investor confidence along with Turkish citizens’ democratic rights and liberties. As long as the plan’s populist dimensions are tempered with fiscal discipline, Turkey's viability as a trade and investment partner will improve in 2016.

As for the United States, it would have to show imagination and political courage. Should Ankara delivers on its promise of reform, Washington should take steps to improve U.S.-Turkish commerce. One route to boost trade with Turkey is Congressman Alex Mooney’s H.R. 3685, which authorizes the U.S. Trade Representative (USTR) to conduct free trade talks with the Turkish government. While trade discussions are unlikely to yield a free trade agreement, authorizing the USTR to talk to the Turks would show Ankara that Washington is serious.

Another approach for Washington is to lobby for Turkey’s participation in the Transatlantic Trade and Investment Partnership (TTIP) talks between the United States and the European Union. For decades, Turkey’s customs union and membership negotiations with the EU have catalyzed the former’s political and economic development; Ankara’s integration into TTIP will translate into an enormous expansion in U.S.-Turkish trade. TTIP would give Turkey’s leaders additional incentives to carry out economic and political reforms.

For too long, the U.S.-Turkish partnership has fallen shy of where the two sides envision it. The recent Turkish-Russian conflagration over Syria, however, could help to advance commercial ties between Turkey and the United States. Turkey offers a powerful investment opportunity that could spur additional economic growth and create jobs on both sides of the Atlantic. To seize this moment, the Turks must enact reforms and the Americans must respond positively by committing to trade talks with their NATO ally.

Eli Lovely is the director of communications and marketing at the American-Turkish Council.

Barın Kayaoğlu is a political analyst and business consultant in Washington, D.C., and a senior adviser at the American-Turkish Council.