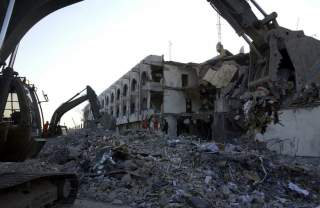 The Shi’a-Sunni sectarian divide has become the reflexive shorthand for explaining events in the Middle East. Commentary surrounding Iraq’s recent national election is representative. Even as experienced a reporter as the New Yorker’s Dexter Filkins concluded that Iraq’s internal slaughter continues because Sunni and Shi’a “[have] never really learned how to live with each other.” Yet, this narrative of Middle Eastern politics distorts the reality that state collapse produces sectarianism—not the other way around.

The most simplistic picture of sectarianism contends that religious hatreds born of the thirteen-hundred-year-old Sunni-Shi’a schism in Islam propel violence across the Middle East. According to this view, religious identity drives all political decision making.

A variant of this analysis has a more geopolitical flavor, arguing that sect forms the glue of transnational alliances. Here, the core concept—a nefarious “Shi’a crescent” of Iranian control—is akin to a retrofitted version of the Cold War “domino theory.” Iran, the supposed champion of Shi’a Islam, is seen as single-handedly manipulating Arab coreligionists to advance its state interests. Proponents of this view constantly speculate about which state will be the next to “fall” to Iranian hegemony.

These strains of thought overstate the political importance of religious kinship. In truth, Shi’a communities across the Arab world consistently pursue self-interest within a national context. Most Arab Shi’a understand that being perceived as stalking horses for Iranian power is not in their interest.

What the key Arab “crescent” states—Iraq, Syria and Lebanon—share is not so much an affinity for Iran as a complete lack of governance. All have the trappings of statehood—ministries, budgets, and so on—but none comes close to governmental control. Under such conditions, people naturally fall back on the lowest common denominator of communal identification. In the Balkans, for instance, this unit was ethnicity; in the “crescent” states, it is the sect. Both Iran and the Sunni Gulf monarchies, sensing opportunities to expand their regional influence, have stepped into the political vacuum by reinforcing the sectarian impulse. This influence, however, is contingent upon events on the ground; it cannot be imposed without local consent. It would be naïve to deny that sect is a powerful latent component of many Arab identities, but the exigencies of war and chaos are required to activate it.

Recent history illustrates the waxing and waning of sectarian identity based on local circumstances: as conditions in Iraq improved after 2008, the “firebrand” Iraqi Shi’a cleric Muqtada al-Sadr, whose militia received significant Iranian support at the height of Iraq’s sectarian bloodletting, distanced himself from Tehran. Conversely, in 2010, a weak political position forced Iraqi Prime Minister Nouri al-Maliki, who distrusts Tehran and had fashioned himself as an Iraqi nationalist, to accept an Iranian-brokered governing coalition. Even Hezbollah—a party that traces its lineage directly to the Iranian Revolutionary Guard Corps—took notably independent positions throughout the 1990s to advance its local interests after the end of Lebanon’s civil war.

In the current moment of pandemic weakness among Arab states, Shi’a politics and political vocabulary appear uniquely motivated by sectarian solidarity. But it is too easy, for instance, to ascribe Hezbollah’s current intervention in Syria to sectarian allegiance alone. In fact, the party’s fear for its own political and military status in Lebanon, in case of a Syrian opposition victory, is at least as powerful as loyalty to Tehran.

The story of the Arab Shi’a is not one of an Iran-backed “crescent,” piercing the heart of the Sunni world, but rather of a mosaic of national communities. Understanding this could help lay the groundwork for the day when better conditions in the Middle East create different political incentives for Arab Shi’a. Such a change may be unlikely in the near term, as too many contending parties stand to gain from perpetuating the cycle of violence and sectarianism. But history demonstrates that today’s enemies are often tomorrow’s bedfellows. For example, associates of Prime Minister al-Maliki orchestrated the bombing of the U.S. embassy in Kuwait in 1983, but this did not prove a stumbling block for better relations when the right time came.

The reductionist sectarian narrative implies that there is nothing to be done about the Middle East. More precisely, it discourages the ability to see new opportunities when they arise. Maliki’s Da’wa Party was no less anathema in the 1980s than Hezbollah is today, but it is now a fixture of the American-backed Iraqi mainstream. Benefiting from similar convergences of interest in the future will be possible only with a more sophisticated understanding of sectarianism in the Middle East.

James Fromson is a Research Assistant at the Middle East Institute and will be a 2014-2015 Fulbright Research Fellow to Jordan.