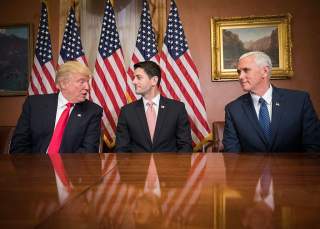 House Speaker Paul Ryan’s decision to call off a vote on the Obamacare replacement bill—the American Health Care Act, or AHCA—is not a surprise: the bill was sure to fail, and it’s dead for the foreseeable future. The surprising thing is that Ryan thought it had a fighting chance to begin with. It polled abysmally, worse than Obamacare itself. Conservative activist organizations such as Heritage Action and FreedomWorks opposed it vehemently. A bill might pass over the objections of a party’s ideological base if it seems overwhelmingly popular. Or a publicly unpopular bill might pass by sheer force of ideological commitment on the part of legislators intent on satisfying their core constituencies. AHCA didn’t have a prayer either way.

The showdown dramatized a dilemma for Speaker Ryan. He has to craft major legislation that can win votes both from the small-government, anti-regulatory House Freedom Caucus and from the smaller but still numerically significant bloc of pragmatic Republican moderates. The AHCA disappointed both groups: it left too many people uninsured and was too unpopular for the moderates to be comfortable with it, while it left too much regulation in place to please the Freedom Caucus. Yet Ryan could not risk moving decisively toward the Freedom Caucus or the moderates without the risk of losing more votes in the other direction. The House Republican middle, the conservative but not hardline majority that keeps Ryan in the speaker’s chair, is a more unstable bloc than either the moderates or Freedom Caucus. It’s neither fish nor fowl, neither unstintingly right-wing nor as ideologically loose as the moderates. This not only doomed the AHCA, but it will short-circuit other difficult legislative initiatives in the future. Congressional Republicans are trying to be two contradictory things at once, and Speaker Ryan cannot split the difference—assuming anyone can.

Donald Trump was perhaps the one man in America who could have broken the Republicans’ impasse. He commands the hearts of Republican voters, who have stood by him in the face of all media controversies and flagging poll numbers with the public at large. Republicans in lower office look at the president in baffled awe: during the 2016 primaries, he defied the campaign consultants and ideological power brokers on whom other officeholders rely. He staked out heretical positions on free trade and foreign policy, condemning George W. Bush for the Iraq War and refusing to swerve from his relatively conciliatory line on Russia, despite ideological attacks and scandal investigations. Standing firm, Trump has succeeded to a surprising degree in changing how his party thinks about trade and, to a lesser extent, world affairs.

If the Trump White House had proposed something startling and bold—a bill that would satisfy more pragmatists than conservatives, for example, or one that went all the way in the direction that the Freedom Caucus demands—it’s possible that the House GOP middle would have gone along with it, in the belief that Donald Trump knows something about politics that Paul Ryan and the Republican policy establishment do not. Even if a bold bill had failed, the political outcome could have been a win for the White House. The outcome would have been seen in some quarters of the right, not as a Republican White House failing to pass legislation through a Republican Congress, but as a populist White House failing to pass legislation through an establishment Congress stuck in its ineffectual ways. There would have been risk in this approach, but Trump was willing to take greater risks throughout the 2016 campaign.

Instead, the White House deferred policy leadership to Paul Ryan. There was nothing distinctly “Trumpian” about AHCA, which would in fact have been worse than Obamacare for the lower-class white voters who were vital to making Trump president. The White House did everything it could to support Ryan, including threatening members of the Freedom Caucus with the prospect of Trump’s campaigning against them. But Trump’s voters last November did not elect him to be the enforcer of Paul Ryan’s agenda. They elected him to put the Republican Party on a new “America First” footing. Exactly what that would mean in terms of domestic policy has never been entirely clear, and it was up to Trump to decide: he could go in the direction of a radical Tea Party conservatism, or he could break with conservative ideological orthodoxy. He could even try a bit of both, as long as he did so with the same devil-may-care attitude he displayed during the election. What he could not do was simply rubber-stamp someone else’s agenda.

President Trump’s critics have all along said that he is not interested in policy. He evidently enjoyed running for president, but doing the work of being president would be another matter. For all the populist talk, policy leadership would never materialize, and the result would be a White House that followed the typical Republican line, albeit without the competence of a typical Republican administration. Those who hold this view, which sees Trump as already a failure in his war with the political establishment, can point the AHCA debacle to make their case.

A more sympathetic account might say that one battle is not the war, and that coming into office with no political experience, President Trump could only learn the hard way just what he’s dealing with on Capitol Hill. The Republican establishment and movement-conservative orthodoxy are supported by policy thinkers (including lobbyists) who stick to what they know because—the shocking 2016 election notwithstanding—what they know works for them. It gets Republicans a House majority and it puts Paul Ryan in place as its speaker. To change the ways of Republicans in Washington takes not only charisma and the electrifying results of a single presidential election, it takes a policymaking apparatus. Even populists need experts, and the apparent contradiction there is an indication of just how difficult Trump’s task is.

In that light, the shipwreck of Obamacare replacement comes as no surprise. It’s worth remembering that health-care policy has haunted both of Trump’s immediate predecessors, even after they succeeded in passing their bills. The Medicare Part D expansion under George W. Bush permanently damaged his relations with Tea Party–style conservatives—indeed, it damaged the entire Republican establishment’s relations with them—while Obamacare politically backfired and gave Republicans control of Congress mere months after it was passed. With policy successes like these, a president might well wonder whether defeat is preferable.

Health care is as difficult a policy area as there is: no matter what Washington does, short of drastic reforms, costs are going to go up, and the public will blame whoever passed the last piece of legislation for whatever discontents arise over costs or coverage. It’s a no-win game. Until now, the best a party could do was to satisfy its own base and hope other voters would buy the ideological spin: that Americans who lost their preferred plans under Obamacare, for example, or who were hit with rising premiums, would nonetheless agree that the tradeoff was worth it to extend coverage to the formerly uninsured.

Paul Ryan and Donald Trump have now encountered a setback, but it is not one that will cripple either of them. Ryan is safe in the speaker’s chair as long as no one else wants to take up that thankless role. The congressional GOP is institutionally ungovernable because it is both ideologically and pragmatically incoherent: only a sweeping change in the party will fix that problem. Until then, the speaker must be resigned to frustration and serving as a punching bag for discontented members and party activists alike.

President Trump, meanwhile, precisely because he may not be very interested in health-care policy, has not lost a fight that he needed to win, no matter what the Washington press corps says. The greater danger that Trump faces is that he will never be able to assemble the policy minds to make his campaign agenda a reality. His voters, or at least those who gave him his margin of victory last year, might well have been more upset if AHCA had passed and predictions of its harmful effects on working-class Americans had proved true. For Trump to be guilty of a failure in D.C. policy terms is nowhere near as damaging as it would have been for him to be seen as guilty of betraying his supporters.

But the AHCA mess is a warning: until someone can actually lead the GOP and resolve its contradictions one way or another, it will not be able to govern. As long as the Democrats are in poor shape, Republicans may feel that getting their house in order can wait. They should remember what a shock last year’s elections were. The public is in no mood for business as usual.

Image: Speaker Paul Ryan meets with Donald Trump and Mike Pence​. Wikimedia Commons/Office of the Speaker of the House​