The Sino-Russian Hydrocarbon Axis Grows Up 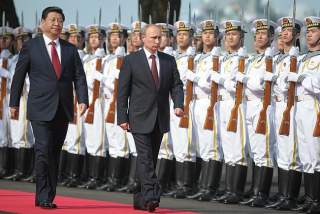 Eight years ago, in the pages of The National Interest, Flynt Leverett and Pierre Noël identified a “new axis of oil”—a “shifting coalition of both energy exporting and energy importing states centered in ongoing Sino-Russian collaboration”—that was emerging as an increasingly important counterweight to the United States on a widening range of international issues.  While, at the time, Russian oil and gas exports to China were negligible, Leverett and Noël projected that Russian hydrocarbons would become “a major factor buttressing closer Sino-Russian strategic collaboration” in the future.

Western analysts have long been skeptical of the prospects for sustained Sino-Russian cooperation—but over the last eight years, the new axis of oil has become undeniable market and geopolitical reality.  Russia is now one of China’s top three oil suppliers (with Saudi Arabia and Angola) and is set to grow its oil exports to China significantly in coming years.  While some analysts cite Chinese firms’ acquisition of upstream positions in Kazakhstan and Turkmenistan and the opening of a Turkmen-Chinese gas pipeline as signs of Sino-Russian competition in Central Asia, these moves supported Moscow’s interest in keeping Central Asian hydrocarbons from flowing west and undermining Russia’s market dominance in Europe.  And this week—just hours after Foreign Policy headlined “the deal that wasn’t”—Russia and China concluded a $400 billion gas agreement, marking a major step in the maturation of the (let’s now call it) Sino-Russian “hydrocarbon axis.”

Geopolitically, too, this axis has assumed ever greater importance.  Moscow has been profoundly disappointed with what many Russian political elites see as the Obama administration’s fundamentally disingenuous “reset” of U.S. relations with Russia.  Beijing, for its part, has been alienated by a series of U.S. military and political initiatives that, in the eyes of Chinese elites, are meant to contain China’s rise as a legitimately influential player in Asian affairs.  In this context, the deepening of Sino-Russian energy ties has indeed buttressed closer cooperation against what both Moscow and Beijing view as a declining, yet dangerously flailing and over-reactive American hegemon.

One observes this clearly in the Middle East.  After the Arab Awakening began in late 2010, the Obama administration’s ambition to co-opt it as a tool for remaking the regional balance in ways that would revive America’s regional dominance prompted more determined (and coordinated) Russian and Chinese resistance to U.S. policies than the world has witnessed since the Cold War’s end.  In March 2011, Russia and China abstained on a UN Security Council resolution authorizing the use of force to protect civilians in Libya.  Washington and its partners quickly distorted this resolution to turn civilian protection into a campaign of coercive regime change in Libya—with predictably and, by now, glaringly evident destructive consequences.  Within weeks, Russian and Chinese officials were openly acknowledging their acquiescence to the Libya resolution as a “mistake”—one they would not repeat in Syria.  Since then, Moscow and Beijing have vetoed three U.S.-backed resolutions seeking Security Council legitimation for intervention in Syria—and will veto more, if need be, until Washington accepts reality and supports a negotiated settlement between parts of the Syrian opposition and a Syrian government still headed by President Bashar al-Assad.

Likewise, over the last four years, Russia and China have refused to support Security Council authorization of further multilateral sanctions against Iran, and have become ever more resentful of what they consider Washington’s illegal and unilaterally imposed secondary sanctions regime.  Their opposition to new multilateral sanctions intersected with increasing incentives for them to defy existing U.S. sanctions to push Washington’s sanctions policy to the limit.  This reality—combined with President Obama’s inability to act on his declared intention to attack Syria after chemical weapons were used there in August 2013, which made clear that Washington can no longer credibly threaten the effective use of force in the region—has compelled the Obama administration to take a more serious approach to nuclear diplomacy with Tehran.  If, in the end, the United States proves unwilling to conclude a final nuclear deal with Iran, Russia and China are likely to become far less accommodating of U.S. demands for compliance with Washington’s illegitimate secondary sanctions.  Moscow, for example, could conclude a $20 billion deal it is currently negotiating with Iran, whereby Iran would swap oil volumes for Russian industrial goods and equipment.

More recently, the deterioration of Russia’s relations with the United States and Europe over Ukraine helped Moscow and Beijing close their new gas deal.  Over the last several years, Russia’s national oil company, Rosneft, has given Chinese energy companies equity stakes in joint oil projects in Russia, an approach that has facilitated the expansion of Russian oil exports to China.  Gazprom, in contrast, has resisted taking Chinese companies as partners in its upstream gas projects.  However, under pressure from U.S. and European reaction to Russian policy toward Ukraine, Gazprom is reconsidering its opposition to giving Chinese companies equity stakes in Russia’s upstream gas sector.  Last year, Novatek—Russia’s largest independent gas producer—gave China’s biggest state-owned energy firm a stake in the Yamal LNG project.  In the context of the new Sino-Russian gas deal, it seems likely that Chinese capital will help finance development of gas supplies from new eastern Siberian fields which Gazprom will use to meet its new export commitments to China, as well as any future commitments to other Asian markets.

More broadly, the Sino-Russian hydrocarbon axis has become a foundational pillar for efforts to turn a post-Cold War world defined by overwhelming U.S. hegemony into a more genuinely multipolar order.  At the Asian security summit in Shanghai where the gas agreement was signed, Russian President Vladimir Putin and Chinese President Xi Jinping issued a joint statement calling on all nations to “give up the language of unilateral sanctions” and stop aiding forces seeking “a change in the constitutional system of another country.”  While the Putin-Xi message was not addressed to any specific capital, its primary intended audience undoubtedly resides in Washington.