The Sky Is Not Falling in China 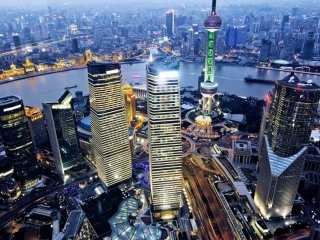 With the Chinese stock market crashing, many have focused, with no small measure of fear, on that economy’s slowdown. Beijing’s statistical office reported recently that the real economy grew 6.9 percent in 2015, down from 7.3 the year before, below the government’s 7.0 percent target—and, as many have noted, also in fear, at the slowest pace in quarter of a century. Other indicators are no more encouraging. Industrial production in the twelve months ended last December grew 5.9 percent, down from earlier reports, while retail sales registered a gain of 11.1 percent, also down from the past. The International Monetary Fund (IMF) expects only 6.3 percent overall growth in the coming year and 6.0 percent in 2017.

While Americans, Europeans and Japanese would delight at such statistics in their own economies, the news has nonetheless created considerable pessimism about China’s prospects. Some contend that growth in China is really closer to 4.0 percent, while Chinese business people were rumored to have spoken of only a 2.2 percent growth rate. These many pessimists also note that electricity usage in China has hardly risen at all during the past year and that weak corporate earnings confirm a softer economy than the government figures imply. And because recent government efforts to stabilize financial markets have failed and past government stimulus programs have encouraged a tremendous build up in private debt outstanding, forecasts of a Chinese collapse have multiplied.

Surveying this almost universal pessimism, anyone with a memory cannot help but wonder how quickly perceptions change. Not too long ago, while China’s economy averaged real growth of 10-12 percent a year, consensus opinion saw it on the verge of overtaking the U.S. economy as the world’s largest—that China would soon eat America’s proverbial lunch. Now consensus thinking characterizes that once seemingly unstoppable power as a risk to itself and to the global economy.

Before, reality failed to match up with the older popular perceptions of China’s unstoppable strength. Now, though it contains much that is troubling about China, reality hardly points to the collapse that so many fear and, indeed, expect. On the contrary, much in China’s economic slowdown looks entirely reasonable, even favorable.

China’s straightforward passage into a more mature phase of development surely underlies much of it. The county’s impressive initial gains in large part reflected the leverage many countries enjoy when they first begin to redeploy their economic effort from agriculture to industry. China was particularly ripe for gains of this sort. When it first began to industrialize in the early 1980s, almost three-quarters of the nation’s output came from agriculture, and some 70 percent of the workforce toiled on the farm, overworked but not especially well employed or productive. These workers became much more effective as they redeployed to export industries. Those remaining on the farm also became more productive as industrialization mechanized their efforts. China can perhaps extend some of this effect. It still has about a quarter of its workforce on the farm. But it cannot recapture the effects of the initial structural adjustments. The resulting growth slowdown may have disappointed some, but it was inevitable and is hardly the sign of ill economic health, as consensus thinking seems to claim.

Part of the slowdown also doubtless reflects a judicious top-down design. Back during the first decade of this century, when China’s boom growth was at its height, Beijing could see that it was unsustainable. The country’s leadership noted at the time how China’s exports during the prior twenty years had climbed from nothing to 12 percent of the global total and that such a gain was not likely to repeat. Beijing decided then that the economy had to broaden its base, focus relatively less on exports and investments in exporting industries and more on domestic engines of growth, consumption, the development of service industries, and associated investments. It was well aware that the process would slow the pace of overall economic growth.

China has a long way to go in this planned broadening. It would be difficult in any economy but perhaps especially in one where so much commercial activity remains state owned—about 15 percent. An intense desire for centralized control makes it difficult for the authorities to facilitate the process by opening financial markets. Still, the fact that retail sales are expanding faster than the overall economy suggests that the effort is gaining traction. The fact that electricity use has slowed may well speak less to economic problems, as some have suggested, than to the tendency for consumption and services to use less power than industry, especially the industries behind China’s exports.

Not all the slowdown is so benign. China also suffers from the after effects of a real estate bubble that inflated during the early years of this decade. Easy credit conditions fostered by government policy inspired overbuilding, primarily of residential structures, and created a surge in private and provincial government debt that has taken the outstanding amount up to the troubling level of 350 percent of China’s gross domestic product (GDP). This overbuilding and the associated questionable debt will have their ill effects. Companies will suffer bankruptcies. The need to work off the overhang of unused structures will retard the pace of economic growth.

It would be a mistake, however, to exaggerate these problems. Westerners understandably become uneasy about such particulars, drawing easy parallels to their own real estate troubles of 2007-09.  Media reports have played on such uneasiness. One of particular influence aired some months ago on the television show “60 Minutes.” Showing massive empty buildings in Chinese regional centers, it implied that if anything China’s troubles are worse than America’s were. But that is far from the case. For one, this country’s most intense problems arose in large part because a diffusion of subprime debt in the financial system created great uncertainties. China has no subprime debt.  On the contrary, its debt, rather than suffused throughout the system, is concentrated largely with provincial governments and a few development companies. This is hardly good for the economy, but it avoids the uncertainties that beset American markets. What is more, the central government in Beijing has much less debt than Washington did during this country’s troubles and so is better able to backstop the financial system should the need arise.

These differences are most evident in the fact that China’s real estate adjustment has proceeded now for at least eighteen months without much bankruptcy or panic outside the recent equity market retreat, which in any case is not especially related to it. Building activity has fallen off and residential real estate prices have declined, so much, in fact, that home sales of late have actually begun to improve. The empty buildings that featured on “60 Minutes” are now all largely tenanted.  If real estate problems were going to prompt a general collapse, it would have occurred at the beginning of the process not eighteen months into it.

China’s growth slowdown undoubtedly will continue. It may even become more pronounced than the IMF projections quoted earlier. The economic drag from the country’s real estate problems will linger as the country completes its adjustment, something that another IMF report estimates will take until 2018. The slowed pace of growth will remain even afterwards as the economy moves deeper into its present, more mature development stage and as it continues to substitute more domestic engines of growth for exporting. China’s economy has its problems, as does every economy, but little points to the prospect of collapse so popularly discussed those days.

Milton Ezrati is a contributing editor at The National Interest, an affiliate of the Center for the Study of Human Capital at the University at Buffalo (SUNY), and recently retired as Lord, Abbett & Co.’s senior economist and market strategist.  His most recent book, Thirty Tomorrows, describing how the world can cope with the challenges of aging demographics, was recently released by Thomas Dunne Books of Saint Martin’s Press.