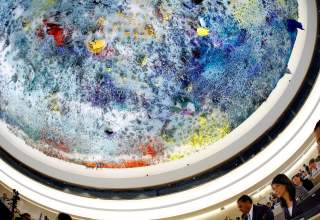 The international system is full of small states. The number of small states swelled in the twentieth century, with the end of both World Wars, the decolonization process in the 1960s and the collapse of the Soviet Union in 1991. More than half of the member-states of the United Nations have a population of under ten million. Small states are not only prominently represented in numerical terms within the international community, but can influence world politics.

Small states are certainly disadvantaged in the international system. Having a small population inherently inhibits the aggregate structural power of that state, as well as creating hurdles that need to be compensated for and unique needs that have to be fulfilled. Small states are geographically and economically diverse, and thus face different challenges in terms of security and welfare. Nonetheless, they all have to compensate for size-related problems and meet needs that are inherent to their smallness.

First and foremost, small states are militarily weak, owing to the constraints of small populations and economies. Military weakness, coupled with the lack of a buffer against threats, leaves small states vulnerable to external coercion. Small states therefore need a peaceful international system and the security guarantees of powerful states and organizations.

International institutions are important to small states because they reduce the asymmetry between the large and small. Again, due to the limits of population and economy, small states are unable to field a large and diverse diplomatic force, which limits the skills and manpower that can be put into forming foreign policies and taking part in negotiations.

International institutions also reduce the transaction costs of diplomacy for small states by bringing states, experts and interested parties to the same fora. This allows small states to access information, learn best practices, form relationships, coordinate with other states, and strike deals that they otherwise could not. Small states cannot set up diplomatic missions across the world or form robust relations on a state-by-state basis due to their limited resources. Therefore, international institutions help to fill these gaps.

These needs should put small states in a position of disadvantage when negotiating with larger states, as small states depend more on what large states have to offer than vice versa. This weak bargaining position should be readily observed in security negotiations, trade negotiations and negotiations within institutions. Nonetheless, small states can compensate for these disadvantages by adopting particular strategies.

In terms of security negotiations, small states can, in fact, obtain highly favorable outcomes provided that they are strategically important. Due to their smallness, small allies can free-ride on an alliance without any broader implications for the sustainability of the alliance. Large states cannot free-ride to the same extent without undermining the deterrent effect of the alliance.

In negotiations in general, small states compensate for smaller diplomatic forces and resources by turning the quirks of small public administrations and foreign services into advantages. They can take advantage of their flexible, autonomous and informal diplomatic forces. Unlike their larger counterparts, their bureaucracies can make decisions rapidly. Decisionmaking often occurs informally, as officials tend to know each other and make joint decisions through informal meetings.

On many issues, small-state diplomats have the autonomy to act apart from their national governments. Diplomats from small states therefore can often speak more authoritatively and credibly because they have the autonomy to make their own decisions. This might give small states a boost when it comes to individual sources of power since their diplomats can more easily use personal relations with other diplomats and develop personal authority.

To compensate for their lack of diplomatic resources, broad-based expertise and aggregate structural power, small states need to prioritize their efforts in order to have any influence at all. This means that they tend to focus on policy sectors of great importance and/or where direct benefits can most likely be gained. A failure to influence a broad and diverse set of issues is not necessarily a huge downside for small states, as most they will have a limited set of issues that are of great diplomatic and economic importance to them.

There has been considerable research on small states within the EU and how they can influence its decisionmaking. Small states use several strategies to exert influence. For instance, the Nordic EU member-states have been identified as influential in terms of soft power. Due to fewer direct interests, and the persistent use of soft-bargaining tactics, small states are more likely to be perceived as neutral, trustworthy and compliant value-creators in negotiations. Findings suggest that several small EU member-states are as good at networking as the large member-states. Research also shows that small states within the European Union compensate for their lack of individual bargaining power through regional coordination and by partnering with individual big member-states.

There is considerable research that suggests the size of member-states in the European Union either has no impact on outcomes or that small states actually achieve more favorable outcomes. These counterintuitive findings, at the very least, suggest that large member-states do not dominate proceedings in the EU, and that small member-states can have some influence.

Becoming Large Is Not a Panacea

Many of the problems that small states face could certainly be solved by becoming large states, either by expanding or by merging with other states. However, as Alesina and Spolaore show, the benefits of size come at a cost of preference heterogeneity: a larger population and more diverse interests lead to greater disapproval among citizens and interest groups about the policies of the central government in a large state than in a smaller one. In republican thought, the shift from small political unit to large political unit often meant a shift from republicanism to despotism. In paraphrasing Montesquieu, Daniel Deudney describes the dilemma of republics as “if a republic be small, it is destroyed by a foreign force; if it be large, it is ruined by an internal imperfection”. Deudney writes, “[b]ecause republics had to be small, they were vulnerable, tended to be rare, and had to be martial to survive. But if they expanded through conquest, as did the Roman Republic, then they would inevitably become despotic monarchies.”

This is one stumbling block towards ever expanding states; in fact, as the benefits of size are decreasing, states will grow increasingly smaller. Thankfully for small states, it has never been as easy being small as it is in the current international system with its unprecedented degree of peace, economic openness and institutionalization. While small states remain highly constrained by their size, there is considerable leeway for maneuver. Small-state influence is, however, contingent on the time, effort and resources that small states put into diplomacy.

Sverrir Steinsson is a researcher in the Faculty of Political Science at the University of Iceland. He tweets at @SverrirSte.