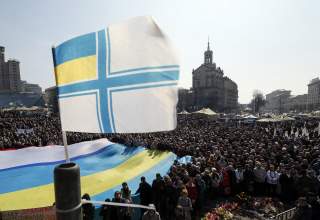 Although it has come at enormous human and financial cost, the conflict between Russia and Ukraine that has raged in the latter’s eastern territories since 2014 has helped spark a fundamental transformation of the Ukrainian military. The country now boasts the second-largest standing army in Europe (behind that of Russia), while a newfound sense of national unity—together with new training and greater readiness—has forged an increasingly capable fighting force. Nevertheless, at least one notable weak spot in Ukraine’s current military posture remains.

Once the pride of the country’s armed forces, the Ukrainian navy has been a principal casualty of the ongoing conflict with Russia. The service was deeply affected by Moscow’s March 2014 annexation of the Crimean Peninsula, which saw the seizure of an estimated 70 percent of its military materiel, forced it to relocate its base of operations from Sevastopol to the port city of Odessa, and caused three-quarters of its personnel to either abandon their posts or defect to the Russian military.

The effects have been both devastating and long lasting. More than three years on, the Ukrainian navy is estimated to be at only one-quarter of its prior strength and capabilities, with just 8,000–10,000 seamen and officers in total (the exact number is a closely guarded secret among Ukrainian military brass). And while other aspects of the Ukrainian armed forces are doing considerably better today than they were in 2014 (thanks in no small measure to support from NATO nations and other assorted international partners), the Ukrainian navy is still unmistakably struggling to regain its footing and reconstitute its strength.

Russia’s strategic position, meanwhile, has improved significantly. Since the annexation of Crimea, the Kremlin has made significant efforts to expand both its capabilities and presence in the Black Sea. This, according to Ukrainian military officials, has included a significant increase in airborne troops, a modernization of the Russian surface and subsurface fleet, and the deployment of at least four new Kilo-class submarines. Russia’s airlift capabilities have also grown with the addition of a contingent of helicopters (a fleet that is now said to total fifty-six) and the renovation and expansion of Soviet-era runways on the peninsula.

The implications are ominous. For the moment, the strategic focus of Russia’s Black Sea Fleet is clearly the conflict in Syria. That is where Russian forces are heavily invested in reinforcing the rule of embattled dictator Bashar al-Assad. However, Ukrainian officials fear that Russia’s Crimean buildup may also signal preparations for future naval operations against “continental” Ukraine designed to augment and amplify the land warfare effort now being waged by Russian troops and irregulars in the Donbas region.

Kyiv has wargamed this possibility at length, with mixed results. While Ukrainian military officials are confident that existing naval assets (coupled with new acquisitions from NATO) will be capable of deterring a Russian maritime assault, they nevertheless have real worries about the need to expand a sustainable, long-term deterrent.

NATO is already helping in this regard, including through the implementation of heightened maritime deployments to the Black Sea. Kyiv’s military cooperation with alliance members is on the rise as well; the 2017 iteration of the recently concluded multilateral “Sea Breeze” exercises—which were designed, among other things, to coordinate responses to potentially hostile submarine activities in the Black Sea—was the most ambitious iteration of the drills to date, even though they received precious little coverage in the West.

Nevertheless, the current correlation of forces between Ukraine and Russia in the maritime domain is still deeply worrisome to Kyiv. So is the lack of an independent naval force robust enough to be able to carry out the full spectrum of operations (from coastal defense to demining) needed to guarantee Ukraine’s security from the sea.

All of that makes Ukraine’s navy an obvious chink in the country’s expanding and increasingly capable military armor. It is a deficiency that needs to be corrected, and soon, lest Moscow feel emboldened enough by it to attempt further escalation.