The Sources of Netanyahu's Conduct 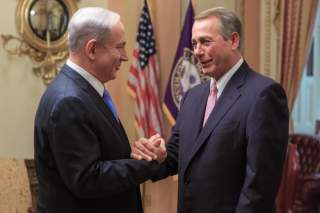 Benjamin Netanyahu is an out there kind of politician. He courts, even thrives on controversy. It is hardly unusual for a political leader to play exclusively to their base, scare-monger or use dog whistle appeals to racism and jingoism. Many supporters in Israel, America and elsewhere revel in Bibi’s brash style, many opponents recoil in revulsion. With Netanyahu poised to overtake David Ben-Gurion as the longest ever occupant of the Israeli prime minister's office, it is hard to argue that this style has not served him well.

In his campaign against the P5+1 nuclear deal with Iran, the Joint Comprehensive Plan Of action or JCPOA, Netanyahu appears to have doubled down on his abrasive and divisive in-your-face politics.

Netanyahu described the JCPOA as “an historic mistake for the world,” heaping scorn on the negotiators and their naïveté and in so doing insulting not only the Obama administration, but also Israel's closest allies in Europe.

In a special webcast Netanyahu called on American Jews to “oppose this dangerous deal.” Many Jewish and pro-Israel  organizations have heeded that call, with AIPAC forming a new tax-exempt lobbying group, Citizens for a Nuclear Free Iran, that is expected to spend tens of millions of dollars in targeted ad campaigns.

But there is a sense of unease accompanying this head-on clash between Israel, its lobbying wing in the United States and the White House. Not only supporters of the Iran nuclear deal but also some of its critics in Israel and America question the wisdom of an Israeli prime minister going to the mats against a U.S. president in such a public, partisan and pugnacious fashion.

Unsurprisingly, much of that criticism is focused on Netanyahu himself.

In Israel in particular, President Rivlin, opposition leaders and the security establishment have questioned Netanyahu’s management of the U.S.-Israel relationship and the tactics he has deployed in the standoff over the JCPOA.

The degree of vitriol employed against the deal is, in part, Netanyahu specific. Bibi is a polarizing figure, a Red State Likudnik who shares his largest financial backer with the Republican Party (Sheldon Adelson), a fellow traveler of the neoconservatives, who personally pushed for the Iraq war, including in congressional testimony on Capitol Hill in 2002.

But to make this only about Bibi is to fail to understand the deeper trends at work, which have guided the prime minister and many other Israelis in developing their approach on this issue. Those trends understandably are not at the forefront of the current debate. There is after all a profoundly consequential international diplomatic agreement to be saved from congressional mauling. The JCPOA's backers are therefore wise to focus on winning the substantive debate, proving that the deal effectively blocks any prospective Iranian pathway to a nuclear weapon.

To stand up for the deal is also not to deny that Israel has legitimate security concerns or that  Israel and Iran are anything other than adversaries. This is a point the Obama administration has itself consistently made. But it is impossible to understand why Netanyahu has adopted this position, or the support he receives, without looking at those deeper trends, which will continue long after the dust from the congressional vote has settled.

It would be convenient, yet mistaken, to think that the only problem here is Netanyahu and that without him all will be hunky dory for Israel with America and the world.

To appreciate that there is a pre-existing Israeli proclivity towards taking such an aggressive and extreme posture one has to strip away one's prejudices regarding Netanyahu to see a bigger picture—that Israel has been socialized into thinking it can get away with anything, that this kind of behavior delivers results.

Netanyahu’s style did not emerge mysteriously from the ether, it is the product of an Israel for so long treated with impunity and indulgence on the international stage. Israel’s illegal settlements, daily violations of international law and denial of basic rights to Palestinians all precede Netanyahu’s premiership by decades. Those have been sustained not by winning a substantive debate on the merits of the policy, but rather by intimidation and bullying, and the irresponsible abuse of moral outrage and historic guilt. Likewise, with the Iran nuclear deal, Israel’s PM has no good arguments or alternatives and so he instead wraps his falsehoods in righteous indignation. And when it comes to the U.S. political system, the role of money in politics and of a few mega-donors is a crucial component in the machinery of managing Israel’s good-standing, just as it is on gun control and other issues.

There are Gulf states allied to the United States with concerns regarding the implications of the nuclear deal for the region, but they are not throwing hissy fits at a global diplomatic achievement.

One can only understand the almost pantomime-esque Israeli response to the Iran nuclear deal in the context of the lesson the world has been teaching Israel for decades. That helps explain why all the main Zionist parties in Israel, whether in the coalition or opposition, have been so dismissive of the JCPOA, each making a case less grounded in reality than the next. Israeli leaders of all political hues have built careers snubbing their noses at the world and paying no price. One gets a sense of the prevailing absurdity when considering that Israel is lecturing the world against the dangers of regional proliferation while sitting on the only nuclear weapons arsenal in the Middle East—and almost never being called on it. It is no wonder the Israeli public backs the official position or votes for ever-more extreme governing coalitions.

Israel is climbing higher up a tree and is in denial as to the consequences of its increasing extremism. Only the security establishment winces at what this trend portends for Israel’s future well-being—alongside a few brave civil and human rights activists, Jewish and Arab, inside Israel. Israel’s security chiefs have concluded that the JCPOA is good for Israel, that the confrontation with the Obama administration is a terrible mistake and that Israel is out on a dangerous limb.

For the politicians though, impunity reigns, and its results are not good for Israel. Being indulged by its friends—in America, Europe and Jewish community organizations—has done Israel no favors.

Those doing the indulging should reflect on this. Republicans will oppose the JCPOA for a host of mostly dubious reasons, not all related to Israel or its deep-pocketed friends. No Democrats in Congress though should delude themselves that they are being helpful to Israel by encouraging the self-defeating antics on display from Netanyahu. Encourage Bibi today and don’t be surprised if the result is a future Israeli leader even more delusional and dangerous to Israel and to its protectors in Washington, DC.

Daniel Levy is the head of the Middle East & North Africa program at the European Council on Foreign Relations.