The South China Sea is Not Beijing's Next Battlefield 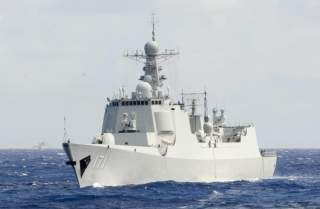 No one likes to admit they made a mistake, especially in Washington.  But what if America's top strategic thinkers have gotten China's military buildup all wrong?

The definition of military deception is “actions executed to deliberately mislead adversary decision makers...thereby causing the adversary to take specific actions (or inactions) that will contribute to the accomplishment of the mission.” Could Beijing be using the South China Sea to this end?  By creating a constant stream of provocations in an area it cares relatively little about, China has diverted attention from an area it cares a lot about. This could be leading the Pentagon toward bad planning assumptions and investments.

Since at least 2011 many of America's leading thinkers have become convinced that the South China Sea will dominate military and security affairs in the 21st century. It is the new battleground, the Fulda Gap with Asian characteristics. China's South Sea Fleet is the new Soviet 8th Guards Army. Or so many have come to believe.

The Pentagon and State Department, as a result, have urgently ramped up their efforts to meet the new threat. Special operations forces, diplomats, and congressional delegations have poured onto the scene, eager to play their roles in this new great game. White House sanctioned security assistance and top-level visits have followed close behind.

This regional influence campaign has resulted in a breathtaking series of breakthroughs. Burma has been re-opened for business. Vietnam, having its arms embargo relaxed, has become a security partner.  U.S. Navy ships, fresh from dockyards in America, have taken up station in Singapore, ready to sally forth in an emergency. The Marine Corps has established a strong presence in the Philippines and Australia. Air Force fighters, bombers, and drones now shadow the skies above. The horizon seems limitless for American geostrategic positioning across Southeast Asia.

China seems more than willing to validate foreign fears. Indeed, Beijing has turned up the volume on its strategic messaging system to full blast. Washington foreign policy elites have been inundated with aggressive Chinese messages about the key importance of the South China Sea.  Just to make sure the point is fully understood, China has provoked a series of incidents with U.S. Navy ships in the area.  China has also preyed on vulnerable fishing boats in waters claimed by the Philippines and Vietnam.

Most shockingly, China has built a number of manmade islands in the disputed waters. It is now rapidly turning them into military outposts. Semi-submerged reefs and rock features, once labeled “dangerous grounds” on maritime maps, now appear dangerous for a very different reason.

Each of Beijing's moves appears carefully calibrated to maximize foreign fear and minimize Chinese risk.  Nothing has happened in this war of nerves that might result in a shooting war. China knows it would lose such a fight. But more important, and often missed by observers, the South China Sea is not a top priority.

China's military buildup is about Taiwan, not the South China Sea. According to reports from the Pentagon and Office of Naval Intelligence, conquering Taiwan is the core mission that drives the People's Liberation Army (PLA). Why? Because China's authoritarian leadership is deeply insecure. Beijing views the Republic of China (ROC, or Taiwan), which exists as an independent and sovereign state, to be a grave threat to the communist party's vice grip on power. Taiwan is dangerous because it serves as a beacon of freedom for Chinese speaking people everywhere.

Taiwan is also a problem for China because it has a close defense and security relationship with the U.S. military. There are over 3,300 Department of Defense visits to Taiwan a year. And that number is growing fast. In addition, a remarkable number of Taiwanese military personnel study and train in America, probably more than any other foreign country. From Beijing's perspective, China's historic rise as a great power will not be complete until it can wrest Taiwan out of America's sphere of influence.  Only then can China break through the first island chain to become a regional hegemon, dominating Japan and South Korea.

According to authoritative Chinese writings, the PLA focuses surprisingly little on the East Asian seascape. The Science of Military Strategy is the most detailed and credible document available on Chinese military thought.  It takes pains to underscore the prime importance of land, not water. China's "main strategic direction" (a euphemism for supreme national objective) is the invasion and occupation of Taiwan's entire territory. Second order campaigns involve conflicts along China's 14 land borders. Here the PLA is talking mostly about war with India. Neither island disputes nor sea lanes are a critical priority.

The Science of Military Strategy makes clear that PLA ground forces would play the leading role in a Taiwan campaign. The ground forces, as a result, enjoy pride of place in the Chinese military. That's one reason why infantry, tank, and amphibious units led the way at China's recent national day parade. The PLA Navy, Air Force, and Second Artillery (China's strategic rocket troops) follow the ground forces in protocol order. Their envisioned roles are to support the Army's needs.

Each Chinese fighting service and branch considers the invasion of Taiwan their principal mission. The Science of Military Strategy reveals the operation would involve information attacks (electronic and cyber warfare), missile bombardments, airstrikes, sea blockades, and surprise amphibious landings. The ground force is expected to face the brunt of the bloody battle, fighting from the coast into Taiwan's dense urban centers and mountains. Assuming victory, the Army is also responsible for pacifying a post-war Taiwan, turning it into a Orwellian police state.

The PLA Navy's mission is to support the invasion of Taiwan. It would be responsible for executing naval blockade operations; providing air defense and transport ships for the invasion armada; shelling the coast; clearing mines and beach obstacles; and deterring, delaying, or disrupting American aircraft carrier groups. These are all highly difficult tasks. Most of these missions are probably outside China's grasp and will be for some time to come.

It is little wonder then that the PLA Navy and Air Force view the safeguarding of China's island sovereignty as third order missions. The PLA ground force, the team's star player, does not consider it a mission at all. Nor does the Second Artillery. Those who think the South China Sea is driving Beijing's military spending spree are missing the point.

There are political, military, and legal implications of China's strategy for the United States. By stirring up trouble in the South China Sea, China keeps American policymakers looking at the wrong problem set.  Beijing's motives, of course, are unknowable. But the effects of its actions are plain to see. More and more Americans are being drawn toward a place where China has an advantage and can exact leverage. It is easy to negotiate, or not negotiate, when the outcome matters greatly to the other side and little to your side. China might care less about the South China Sea than the United States and her allies do.

Annexing Taiwan is vastly more important for the Chinese Communist Party (CCP) leadership. It is China's weakest and most vulnerable point. Beijing hides this by spreading misinformation about Taiwan.  One example includes the notion that the two sides of the Taiwan Strait are moving more closely together economically, so political unification is inevitable. In reality, nothing could be farther from the truth.  The CCP's policies toward Taiwan are failing miserably. Recent polling data reveals that unification never been more unpopular in Taiwan than it is today.

Another common misperception is that the balance of military power has shifted decisively in the Taiwan Strait. If that were true, as China's propaganda machine would have us believe, the PLA could invade Taiwan anytime it wanted. However, recent studies on Taiwan's air and naval defense capabilities reveal that the ROC military is a whole lot tougher than it generally gets credit for. China knows there is a long road ahead before it can credibly threaten Taiwan with invasion.  And Uncle Sam can tip the scales at any time.

Washington, it seems, has been influenced by China's misinformation campaign.  War games, exercises, and studies now focus on the South China Sea at the expense of Taiwan. As a result, there is a large and growing asymmetry of knowledge and information regarding Taiwan scenarios. The PLA has legions of Taiwan experts. The Pentagon has a dwindling handful.

The U.S. government has self-imposed restrictions that make the problem even worse. Navy ships are prohibited from docking in Taiwan's harbors, even in the event of severe weather. More absurd still, admirals and general are not allowed to visit Taiwan and meet the men whom they would be expected to fight shoulder-to-shoulder with in a war. In a crisis, the President of the United States is going to be on the phone with commanders in Hawaii who, while otherwise superb, have no firsthand knowledge of the battlefield.