Is the South China Sea the Stage for the Next World War? 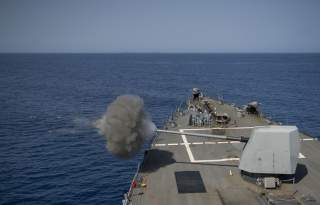 Recent skirmishes in the South China Sea between the Indonesian navy and China’s coast guard have reinvigorated public interest towards the region. Some applauded Indonesia’s resolve in defending her rightful maritime territory. However, some are still left wondering over China’s motives in provoking such regional conflict—including with Vietnam, Malaysia and the Philippines. How can one explain why China risks a major war that could potentially drag the United States in for a bunch of uninhabited rocks?

Some say they are fighting for control over major oil and gas reserves in those seas. But this seems not to be the case. After all, great powers have rarely fought one another in a major war over economic resources in modern history, if at all. Or is it because of China’s nine-dash line? For sure, one needs to differentiate the means, ways and ends of phenomena. The nine-dash line is a means that China uses to justify its policy ends. But it does not explain the endgame it wants to achieve—therefore, it cannot be used to explain its motives in the South China Sea.

Let’s take a look back at the twentieth century. World War I started when Austria-Hungary declared war on and attacked Serbia. So, does it mean that World War I was caused by Austria-Hungary’s invasion? No. Austria-Hungary did start the war, but it was certainly not caused by it. The cause of the war was the great powers’ concern about the prevalent regional order in Europe—and their wish to alter it.

The Germans (together with Austria-Hungary) looked uncomfortably at the shifting balance of power towards the Franco-Russian (and possibly British) alliance. They saw the erosion of Germany’s dominance over the European order while looking for a way to reverse the trend. The French and the Russians, boosted by newly gained power, had been humiliated during the German-led political order before and were also looking for a way to punish Germany along with her allies.

Similar to World War I, World War II started with an invasion, when Hitler invaded Poland. However, Poland was not the cause of the Anglo-French and German rivalry escalating to a war in 1939. Instead, the Anglo-French were concerned over the shifting balance of power towards Germany’s favor and sought to prevent it from going further in that direction. That determination finally led to war over Poland’s survival.

Put simply, what Serbia and Poland have in common with the South and East China Seas is that they served as a venue of great-power rivalry. But they are definitely not the cause of that rivalry.

To understand the cause of the current U.S.-China rivalry, one needs to see the history and strategic picture of the Asian region. Put simply, one needs to see beyond the South China Sea. Following the defeat of Imperial Japan in World War II, the United States has been the sole great power that can project its power throughout the region. Since that day, the region has come under American-led regional order. Having only a fraction of the United States’ power, other states in the region accepted American primacy.

What is happening today is that China has gathered enough power and is becoming powerful enough to match (or even surpass) America’s ability to project power throughout much of Asia. Power means leadership throughout history and with its newly gained power, China wants a bigger role in regional leadership. For sure, though it seems weird for most people, anyone who carefully study history will concede that this is a normal—though arguably regrettable—state behavior.

One might point a finger towards Japan and Germany as comparisons—both of whose rise of power in recent times does not correspond with a regional crisis that risks regional war—and, therefore, accuse China’s behavior as not normal. However, history once again shows that both states are the anomaly—not China.

As Singaporean leader Lee Kuan Yew once remarked, “Unlike other emergent countries, China wants to be China and accepted as such, not as an honorary member of the West.” It is clear from his observation that China has set its sights on displacing the United States as the dominant power that will dictate the regional order in the Asia region. This is not to say that we must agree with or accept all China wants to do. We may dislike how our rival thinks and behaves, but we have to understand them. Without understanding how China thinks, a plausible solution to the current conflict will be hard to devise.

China’s aspiration for greater regional leadership is unfortunately met with fierce challenges from the United States as well as other regional great powers such as Japan and India. Following the rise of China’s assertiveness, the United States introduced the term “pivot” (later rebranded as “rebalancing”) while her ally, Japan, has reinterpreted her constitution, allowing Tokyo to be more active both politically and militarily abroad. India, for her part, introduced an eastward-facing policy while trying to strengthen her maritime power to prevent Chinese incursion into the Indian Ocean.

Facing the prospect of containment (instead of accommodation), the question of paramount importance for China’s leaders is: how can China displace the United States (and, therefore, U.S.-led regional order) from Asia?

China seems to believe that the U.S.-led regional order is based on the U.S.-led political security regional order. This political security order in turn is based on the U.S. regional alliance system, which is known as hub-and-spoke system, encompassing Japan, South Korea, Australia, the Philippines and Thailand. This alliance system grants the United States access to forward bases that ensures her ability to rapidly project her power throughout the region whenever crisis erupts.

Without such bases, the United States won’t be able to effectively project forces and, therefore, will have only marginal influence in a crisis. Thus, curtailing the United States’ capability to respond to a regional crisis means much less U.S. influence upon regional order.

So, as the logic goes, breaking this alliance system will lead to a breakup of the U.S.-led regional order. Thus, the question now becomes: how can China break up the U.S. alliance system?

Alliance, by its nature, means an insurant. By inking an alliance, the United States has assured her allies that she will help defend them in times of crisis. Just like a commercial insurance company, the success of the business rests on the insurer’s credibility. As long as U.S. allies believe that Washington will fulfill her words, the alliance system will hold up. However, if U.S. allies do not believe her words—thereby doubting the credibility of her words—the alliance system will unravel.

A new question emerges as a consequence: how can China damage U.S. credibility so much that it will lead to the unraveling of its regional alliance system? For sure, there is no better way to damage one’s credibility than proving that one is unable to fulfill one’s words. Put it another way, China must show U.S. allies that the United States will not come by their side when they need her. That means instigating a conflict with U.S. allies, making sure they will call for U.S. assistance and, at the same time, making sure that the United States will not fulfill her insurance policy.

It is a dangerous game to play for sure. Beijing must do its best to make sure the United States will not come by her allies’ side or else it will face a war with the United States—a grim possibility given both sides’ possession of nuclear weapons.

A bunch of uninhabited rocks in the South China Sea (and East China Sea) will do just fine. It is a matter of sovereignty and territorial integrity—which can hardly be compromised—from the perspective of U.S. allies. While from the U.S. perspective, those rocks represent no more than what they are; that is, rocks. Those rocks have little strategic value and, thus, in themselves have little relevance for U.S. national interests.

Entering the fourth year of China’s surge of assertiveness, it seems that China’s strategy has achieved some success. In South China Sea, U.S. responses are lackluster while showing a degree of indecisiveness. Arguably, the most infamous among those is the United States’ failure to properly assist the Philippines in protecting its sovereignty in Scarborough Shoal. However, responding to such a crisis with more resolve entails more risks. For sure, a lower-risk option is available in the form of accommodating China’s aspiration by trying to develop some form of joint leadership in the Asian region. While it is not too late for the United States to reverse the negative trend, she surely has much to do.