The 'Special Relationship' is in Trouble 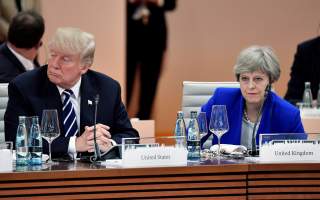 President Barack Obama was no great Anglophile. As a young man, he had the misfortune of attending a British stag do—what you Americans call a bachelor party—so he’d seen us at our worst. The son of a Kenyan, Obama seemed anticolonialist and suspicious of limey arrogance. At the start of his presidency, he upset a lot of ‘Special Relationship’ enthusiasts when a Joseph Epstein bust of Winston Churchill was removed from the Oval Office. Quite how directly Obama was involved in that decision remains a moot point. But it was enough to hurt delicate British feelings.

Towards the end of his presidency, Obama again irritated British patriots by interfering in our referendum on Europe: Britain, he said, would be at the ‘back of the queue’ for trade talks if we elected to ‘Brexit’—that is, leave the European Union.

For all that, however, Obama always maintained highly cordial relations with the British government: he and our former Prime Minister David Cameron always got on. Obama joined the disastrous Libya intervention in large part because Cameron pressed him into it. He may have been reflexively anti-Limey: but his administration never let that show.

Donald Trump seems the opposite. Within hours of Trump’s inauguration on January 20 last year, the Churchill bust, by now a symbol of the health of the ‘Special Relationship’, had reappeared in the Oval Office—apparently at the suggestion of Nigel Farage, the leading Brexiteer, who had campaigned for Trump in 2016. This prompted excitement among British jingoists: Trump was an Anglophile! His mother was Scottish and a monarchist! At his Turnberry golf course the day after Brexit, Trump had told us how ‘she loved the ceremonial and the beauty, coz nobody does that quite like the English.’ He’d also expressed great enthusiasm for Brexit, which he seemed to think a great historical turning point—like his election, a hammerblow against the globalist elites. He promised, contra Obama, that Brexit Britain would be ‘first in the queue.’ In Trump’s eyes, it seemed, the EU was a protection racket for German manufacturing. Britain was ‘so smart for getting out,’ he says. Trump promised a ‘beautiful’ U.S.-UK trade deal would be easily and almost instantly struck.

Everything began to look rosy in the garden of the special relationship. Our prime minister, Theresa May, became one of the first foreign leaders to meet Trump, and invited him to Britain. The two briefly held hands outside the White House. Populist nationalists talked of May as if she were Thatcher to Trump’s Reagan. May’s international Brexit advisers, Boris Johnson and Liam Fox, began working closely with the U.S. government to achieve that ‘beautiful’ trade deal.

The trouble, however, was that a huge number of Brits, like a huge number of Americans, found Donald Trump so repulsive that they can't tolerate the idea of him as leader of the free world. May was called ‘Theresa the appeaser’ for having courted him. Resisting the Trump visit became a rallying call for the British left—and a way of sticking one in the eye of the Brexiteers. More than two million people signed a petition demanding that Trump’s visit be downgraded from state to ‘official’ visit, meaning he would not travel down the Mall in an open carriage with Elizabeth II and the Household Cavalry or spend a night in Buckingham Palace. (Even left-wing Brits think such things are tremendously important.)

As the forty-five presidency went on, this very British ‘never Trump’ campaign grew louder and shriller. Every time the president tweeted something outrageous, spokesmen and talking heads would take to Britain’s airwaves to demand that he should not be welcomed or even allowed on to our shores. Some people stressed that, never mind Trump’s character, it was important for us to honour the office of the U.S. president, tended to be shouted down.

The French, meanwhile, had no such problem. France’s new young president, Emmanuel Macron, who had reached the Élysée Palace by presenting himself as the Euro-antidote to Trump and Brexit, wasted no time in welcoming Trump to Paris to celebrate Bastille Day. The French did not protest—perhaps because they were, as a former British ambassador to Washington rather mischievously suggested, ‘just pleased to score one over the rosbifs and get Trump to Paris before London and to do it in style.’

Trump’s relations with Britain went from good to bad, and from bad to worse. In November, he managed to offend the us by retweeting three anti-Muslim ‘Britain First’ videos. Presumably, he saw the clips because Ann Coulter had posted them on her Twitter feed, and he decided to retweet them because Britain First sounded like America First. He didn’t realise that Britain First was a loony right-wing group. The videos, one of which turned out to be fake, caused great consternation in Britain. May was forced to rebuke Trump for having posted them—she could hardly have done otherwise given the outcry—and the Stop Trump brigade started threatening civil disobedience if his visit went ahead.

Sure enough, last week the visit was cancelled. Trump claimed that he had been put off Britain by a ‘bad deal’ over the moving of the U.S. embassy in London. Everybody knows that was a silly excuse. His real reason was that, as a source close to Trump told the Sunday Times, he had ‘not been shown enough love’ by the British.

Britain’s anti-Trumpers revelled in the news. The @UKStopTrump coalition Twitter feed declared ‘another HUGE victory for our movement.’ London’s Labour Mayor, the Muslim Sadiq Khan, who has had his own clashes with Trump over Islamic terrorism, boasted that the American president had ‘got the message.’ This prompted a stinging response from Boris Johnson, who called Khan a ‘puffed up pompous popinjay.’

Johnson may have had a point. But his anger was undoubtedly caused by a fear that, in putting Trump off from the United Kingdom, the British may have got on the wrong side of a capricious commander-in-chief, a leader we desperately need behind us a we leave the European Union. Suddenly, the Special Relationship looks in worse shape than it ever did under Barack Obama, and that's bad news for Britain.