The St. Petersburg Bombing: Why It Won't Bring America and Russia Together 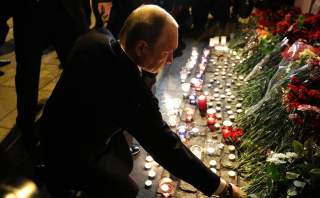 The bombing in the St. Petersburg metro that killed eleven people is a tragedy, and appropriate messages of condolences have been flowing in from Western capitals. President Donald Trump declared it a “terrible thing” and called Russian president Vladimir Putin to offer sympathy and assistance. Similarly, UN ambassador Nikki Haley declared that the United States and Russia stood together against these extremist groups.

Yet this attack—as much as it seems to validate Trump’s assertion that Russia, the United States and the nations of Europe face a shared threat from groups like the Islamic State, their offshoots and their imitators—is not going to lead to any policy shifts, nor does it portend any sort of improvement in U.S.-Russia relations. There continues to be too much distrust between the political and security establishments of both countries. Prior to the bombing in St. Petersburg, comments offered by Haley some twenty-four hours before the attack best characterize the current position of the United States: while not precluding the possibility of working with Russia to go after the Islamic State, “there’s no love or anything going on with Russia right now” and the United States will continue to hold Russia “accountable” for its actions in Syria, its relationship with Iran and how it conducts its domestic politics. Moreover, Haley’s statements that international peace and security are threatened by countries that violate human rights are raising Moscow’s ire.

Western willingness to consider strengthening and deepening an anti-terrorist partnership with the Kremlin will depend on what steps Moscow takes in the coming days. In the past, most notably after the horrific attack on the school in Beslan in 2004, the Russian government has promulgated stricter security measures and/or changed elements of the political system. This incident, coming so soon after what was for Russia a series of large-scale countrywide protests against government corruption, almost guarantees that many Western political figures as well as members of the Russian nonsystemic opposition will view any new mandates permitting greater restrictions on public assembly or more intrusive surveillance, not as genuine anti-terrorism measures, but as designed to further crack down on the protest movement.

As the investigation continues, attention will focus on three distinct but interrelated groups of suspects: Russian passport holders who traveled to Iraq and Syria to join the Islamic State after 2014 but are now returning as ISIS’s hold on its “caliphate” in the Levant is weakening; residents of the North Caucasus republics of the Russian Federation, who are “homegrown” radicals; and Central Asian migrants who were radicalized in Afghanistan, within ISIS itself, or as part of regional Salafi organizations. Complicating matters is the tendency of “branded” groups like ISIS or Al Qaeda to claim that those responsible for an attack “pledged allegiance” to the main group even if it had nothing to do with the planning and execution.

Ever since the Russian intervention began in Syria in earnest a year and a half ago, militant groups have vowed to take revenge on Russian soil for Putin’s actions. St. Petersburg, Putin’s hometown—and on a day when he was there holding a summit with Belarusian president Aleksandr Lukashenko—would have been a tempting target. Even if this attack was the result of one homegrown radical, it could easily be claimed as a fulfillment of that promise. Yet that would be insufficient as a basis to reinvigorate U.S.-Russia counterterrorism ties. The reality is that while the specific attacks which harm civilians will be loudly condemned, there is a consistent strain of thought that suggests that the actions of the Russian government have created the problem in the first place: that Russia’s support of Bashar al-Assad, the rules of engagement it adopted for its military mission in Syria, its policies in the North Caucasus and its support for Central Asian autocrats have made Russia a target for terrorist activity. As we saw after the 9/11 attacks, there was definite unease with bringing Russia into the “war on terror,” out of concern that it would signal Washington’s acceptance and approval of Russia’s actions, especially with how it had dealt with insurgencies in the North Caucasus.

Russia and the United States may indeed face a common enemy, but for now, they will continue to fight separately.