The Stakes of Losing Our "Strategic Patience" in Syria 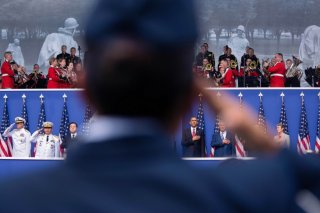 After three years of strategic ambivalence and another three months of strategic shift, President Obama may be considering another change in strategy for Syria. He’s convening a team to assess the administration’s current plans, CNN reported last Wednesday night. That may include considering accelerating and expanding U.S. assistance to Syrian opposition groups and targeting Assad-regime forces.

Consistently reassessing strategy is good policy, and the administration is right to take a hard look at its plans for Iraq and Syria. But immersing the United States deeper in Syria’s civil war was a bad idea three years ago, it was a bad idea in August, and it’s a bad idea today. America has one vital interest in Syria: preventing the Islamic State from staging a terrorist attack against the United States or its allies. As a nation, we lack the national interest and the political will to commit to ending the Syrian civil war. Without these, we shouldn’t try.

Any effort the United States makes to try to build a Syrian opposition to defeat the Assad regime or to provide support against the regime forces will be a half-measure. Intervention advocates know this—their plans range from politically unviable to strategically underwhelming. Some suggest training a few thousand Free Syrian Army rebels to fight against the Assad regime (and, we hope, the Islamic State when it suits their interest). Others have larger plans, and have suggested forming a new moderate Syrian opposition army, 60,000 strong, with leaders hand-picked by a Western coalition. All of the proposed strategies rest on dangerous assumptions about what the United States can actually accomplish. The United States may be the indispensable nation, but that doesn’t make it omnipotent.

Foremost among those assumptions is that an American intervention would hasten a conclusion to the war. Interventions don’t end civil wars, they prolong them—and that’s in situations when the intervening nations actually commit to trying to win the war. Don’t take my word for it. Read George Washington University professor Marc Lynch, or the overwhelming body of academic research on the subject he cites. Or—if you have the clearance (I don’t, but the New York Times knows someone who does)—read the CIA’s in-house report on U.S. support to insurgents. They concluded that it doesn’t work and would probably be a bad idea, and that reportedly convinced President Obama. Until now.

The small but vocal minority of analysts who have tried to justify a broader intervention have struggled to make their case. Max Boot, a fellow at the Council on Foreign Relations who literally wrote the book on the history of guerilla warfare, could only come up with two instances of what he considered successful U.S. interventions in support of insurgents. He cited the U.S. intervention in Afghanistan in the 1980s and support for the Contras in Nicaragua as the best examples of when U.S. support for insurgents “worked.” Robert Kagan, a senior fellow at the Brookings Institution and former Reagan administration official who wrote a popular revisionist history of the Contra debacle, echoed this in a similar article. “War is full of surprises,” Kagan wrote in an argument for intervention that boils down to Hey, you never know. Kagan concluded that “if [Obama] is genuinely trying to weigh his options, he ought to take another look at those past ‘failures,’” pointing to U.S. policy in Afghanistan and Nicaragua in the 1980s. “Such a ‘failure’ in Syria would look pretty good right now.”

If two decades of Taliban rule and an Al Qaeda safe haven—or, as in Nicaragua, another stalemated war of attrition—is what happens when Kagan and Boot’s strategy for Syria works, what happens when it fails? No wonder the CIA’s in-house historians decided it was a bad idea.

And an intervention in Syria is likely to fail. Advocates for increased U.S. involvement discuss America’s role as though Syria is under a bell jar, but any half-hearted intervention by the United States would almost certainly be met with escalation by the Assad regime’s patrons. Russia has supported Assad for years, quietly supplying him with weapons, despite international condemnation. Moscow is set on maintaining access to the port at Tartous, and the United States’ training several thousand Free Syrian Army fighters overtly (instead of covertly, as the United States has since perhaps as early as October 2012) is unlikely to dissuade them. Iran is even more invested. They see Assad as a lynchpin in their regional sphere of influence and have lost an untold amount money, weapons, influence with Hezbollah and Iranian lives in the war. Tehran is all in, and knows American policy makers are hedging its bets. And why wouldn’t they? President Obama knows he has a bad hand: limited national interests and few credible partners in the conflict.

The atrocities committed by the Assad regime pain the consciences of Americans, but intervening and accelerating the bloodshed of a war we have no intention of winning is not a more moral alternative. John Nagl, a retired lieutenant colonel and architect of the U.S. counterinsurgency strategy in Iraq, has been citing lately St. Augustine’s adage that the “purpose of war is to build a better peace.” Aside from a handful of unreliable rebels and a government-in-exile with little credibility in Syria, the United States has few partners with which to build a better future for Syria. Suggesting the United States and its tenuous coalition can craft an opposition that adheres to its standards of moderation and will be able to sway the broader Syrian public is dangerously optimistic. Or worse, hubristic.

President Obama’s strategy so far has been calibrated to America’s interest in Syria and, given time to work, could be successful. His greatest challenge will be to not go too far. Gen. Martin Dempsey told the House Armed Services Committee on Thursday that “Progress will be uneven at times…But with strategic patience, the trend lines favor the coalition over the long term.” President Obama should hold on to that patience, because if he allows the U.S. mission to creep and is drawn into Syria’s civil war, he risks adopting a war of choice he does not want to fight—and might not be able to win.

J. Dana Stuster is a policy analyst at the National Security Network and co-author of a forthcoming report on U.S. strategy to combat the Islamic State.

This piece first appeared in RealClearWorld.