The State of African Security 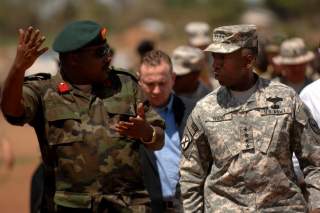 With President Barack Obama's recent trip to East Africa, attention has understandably focused on Kenya and Ethiopia, as well as nearby Sudan. And with the ongoing challenges posed by ISIL and related extremist movements, Nigeria, Mali, Libya and Tunisia have all stayed in the news.

But it is worth taking stock of broader security trends in Africa at this juncture. Doing so reminds us of the enormous challenges that remain on this continent with more than fifty countries and a billion people. Yet it also should give us hope, for much progress has been made, and with some additional effort, the United States may be able to help spearhead greater positive momentum. In addressing the developing trends on this huge continent, it is easiest to break things down by region, leaving aside for the moment the part of the continent where Mr. Obama has just been:

After a terrible period of civil war in the 1990s and early 2000s, together with atrocious misrule in places like Liberia and Ivory Coast—all capped off by last year's Ebola crisis—this region is on balance doing much better. There are no major ongoing wars, some of the region's key countries are showing the way towards better governance, and democracy is gradually (if fitfully) spreading.

With nearly 200 million people, Nigeria contains roughly a fifth of the continent's entire population, making it a dominant player in West Africa. Its challenges remain serious, with Boko Haram a menace throughout the northeast. But President Muhammadu Buhari's recent election and inauguration open up new possibilities. His military background, the fact that he is a Muslim from the north and his apparent pragmatism so far in office create potential for forward movement.

Democratic Republic of the Congo

The Democratic Republic of the Congo is a key player in Central Africa. It is Africa’s second-largest country (after Algeria) and is also its third most populous after Nigeria and Ethiopia. Fortunately, the DRC has emerged from the worst of its travails, the immediate post-Mobutu period, when a general sense of lawlessness combined with spillover from the Rwanda genocide and civil war caused the breakdown of the state that led to millions of deaths. In recent years, a UN peacekeeping mission has partially stabilized much of the east; in addition, the government led by President Joseph Kabila has returned at least a light touch of sovereign rule and state presence to much of the rest of the country. But Kabila's government is still rather weak, the country's east remains rough and ragged, the nation's military remains mired in misrule and on top of it all, the president is showing signs of wanting to stay in office for a third term through elections scheduled for next year. There has been progress, but the situation is showing few signs of further improvement.

Central Africa beyond the DRC

Again, the picture is mixed if one looks at neighboring states. Rwanda remains more stable than in the periods leading up to and through the 1994 genocide, but President Paul Kagame has begun to overstay his welcome, if one considers Rwanda's prospects for meaningful democracy. Worse, Burundi's president has just ignored the constitution and engineered a third term through a very dubious election. Uganda is doing reasonably well, but only as President Yoweri Museveni has in effect become president for life there, raising questions of what will happen once he is gone.

South of the DRC, one may find the continent's best news, at least in terms of traditional measures of conflict. The long conflicts in Angola and Mozambique are over and have not reignited. Countries like Zambia and Malawi and Botswana are doing pretty well. Zimbabwe is the outlier under President Robert Mugabe, and of course major questions surround what will happen once he finally departs the scene. South Africa is the region's pivotal player, and despite all its internal problems of economic injustice, racial tension and crime, it appears strategically stable.

Put this all together and one finds a continent that is still quite troubled. But Africa is also doing far better than it ever has since the wave of independence swept the continent just over a half century ago—yet then quickly was bogged down by autocratic and corrupt leaders, successive coups and Cold War–nourished conflicts.

So we should take heart, and we should also ask how the outside world can help. One suggestion is to think of how the United States and other Western nations can more directly contribute to the gradual trend towards greater security on the continent. The creation of Africa Command, along with expanded training missions, has been a welcome development in the last decade or so, but it's also worth considering more direct American military support under the right political circumstances.

For example, the United States has learned a great deal about how to better work with, and strengthen, indigenous militaries in Iraq and Afghanistan. It has created new structures such as "advise and assist" brigades that consist of many small advisory units, backed up by logistics support and intelligence and command/control capabilities, plus quick-reaction units, should any of the advisory teams get into trouble. The deployment of one or two such brigades to Africa in places like Nigeria, should circumstances become conducive, could help propel Africa further forward, building on the positive momentum of recent times.

As he nears the end of his presidency, Obama should consider such a bold move. To be sure, economic and aid initiatives remain crucial as well, but with the wars in Iraq and Afghanistan being far less demanding than they were before, the United States now has the opportunity to contribute more meaningfully to Africa's security.

Michael O’Hanlon is a senior fellow at Brookings, member of the Africa Security Initiative there, and author of the new book, The Future of Land Warfare. Kelly Sampier is a graduate of St. Lawrence University in New York.