The Strange 'How We Lost Iraq and Afghanistan' Debate 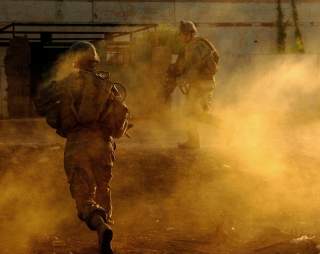 Post-mortems on “How We Lost Iraq and Afghanistan” seem to be proliferating—even though there’s a lot of “mors” still happening in those battlegrounds.

Of course, criticizing the conduct of war, even as bullets fly, is nothing new. Even “the Good War” had its share of cranky complaints about how the war was being won. One of the more distasteful examples came via Major General Edwin F. Harding, who had commanded the 32d Infantry Division during the bloody Papua-New Guinea campaign.

Canned for lack of progress, Harding subsequently instigated an article in the Saturday Evening Post criticizing an “unnamed” general who exacerbated battle losses by ordering direct attacks on fortified bunkers. The same general, the article claimed, told starving men to take vitamin pills if they were hungry and ran away at the sound of Japanese mortars.

The only American general fighting in Papua-New Guinea at the time was Robert Lawrence “Ike” Eichelberger, who had fired Harding and replaced him at the front.  Harding’s finger-pointing in print was a bit of payback.

Harding is no one-off. Still, by any standards, the laments over Iraq and Afghanistan seem to be coming in record numbers.

James Fallows penned the most recent, high profile piece in The Atlantic.  He laments that the U.S. military repeatedly “has been defeated by less modern, worse-equipped, barely funded foes.

Or it has won skirmishes and battles only to lose or get bogged down in a larger war.”  We lose, Fallows concludes, because we just don’t take war seriously enough. “The cost of defense,” he argues, “goes up and up, will little political resistance and barely any public discussion.”

Fallows’ choice of culprits seems more than a little off base. He throws out a lot big numbers—the cost of wars, warplanes, and so on. But big numbers out of context don’t tell you very much. During World War II, the U.S. devoted about 40 percent of its GDP to the war effort. During the Cold War, we spent far less as a percentage of GDP. Yet since-9/11, U.S. defense expenditures, including combat operations, amount to only about half of our Cold War spending. Placed in that historical context, today’s defense spending is fairly constricted.

Raw spending figures, of course, tell us nothing about the cost-benefit of those expenditures. Nature spends nothing to start a forest fire, yet we may spend billions a year for insurance or fighting fires. Does that mean those are foolish investments?

The value of defense is measured by the cost of what we are protecting, not by how much our enemies spend to weaken us.

Our armed services are responsible for defending the U.S and its vital interests. Essentially, they are protecting a $188 trillion economy (as well as around 20 percent of the world’s GDP). Viewed from that perspective, the cost-benefit ratio of defense spending is quite favorable compared to many other public “investments.”

Arguing about how defense dollars can best be spent makes sense. Arguing the level of spending is grossly out of proportion to the nation’s needs or capacity is more than a bit of stretch.

Fallows’ remedy falls short as well. Basically, he argues Americans should pay more attention to this stuff. He offers the World War II experience—in which those who weren’t in uniform tracked closely the day-to-day vicissitudes of the campaigns via radio and newspaper reports—as an example of the type of citizen involvement to be emulated.

Citizen involvement is certainly to be desired.  But to hope for WW II levels of engagement is to indulge in wishful and ultimately horrific thinking. For America, World War II was different from all other wars, before and after. No other American war involved as many Americans—directly or indirectly—in the war effort. From the American Revolution on, only a minority of the populace was ever touched by war. The only way to repeat the World War II level of involvement would be to have a war on the scale of World War II. That seems like the wrong remedy.

That a minority of Americans is part of the war effort is the “normal” condition of American wars. Deal with it. And frankly, let us hope it stays that way.

Nor is it clear that having a lot more people paying attention produces better military results.  All of America watching didn’t make the bumbling in North Africa go better. It didn’t do much for the disaster in the Philippines. Americans rolling up their sleeves didn’t prevent the debacle of a campaign at Guadalcanal. Being all in didn’t prevent the reversals during Market Garden or the Battle of the Bulge. These boneheaded military setbacks occurred when we apparently had our A game on.

Nor is fair to say that Americans have been absent from the debates over the wars in Iraq and Afghanistan, though I am not sure that Code Pink and Michael Moore contributed much to advancing military efficiency.

All this notwithstanding, Fallows is on to something. There is real malaise about the nature of U.S. military power. This dissatisfaction is more deeply rooted than personal grudges like Harding’s hard case for getting canned as MacArthur’s scapegoat. The level of skepticism and pessimism is more than equal to the post-war self-doubt seen after Vietnam (with the difference, of course, that we blamed the troops then and now we hug them).  Fallows is right when he says something is amiss.

Others are trying to put their finger on this raw nerve, including thoughtful former serving officers and serious scholars of military affairs. For example, in 2013 Andrew (Skip) Bacevich penned Breach of Trust, which complained we are using the military for problems that aren’t suited for military solutions. Gian Gentile’s Wrong Turn: America’s Deadly Embrace of Counterinsurgency slams the military for falling for strategies that were bound to fail.  Dan Bolger’s Why We Lost: A General's Inside Account of the Iraq and Afghanistan Wars complains about a generation of military leaders who didn’t really understand the enemy.

These voices are all part of a growing debate over what is right and wrong with American military power.

That’s a worthy debate for a democracy to have. Matters of war and warfare should never be taken lightly. Providing for the common defense is the most sacred and serious duty our government has. How our leaders in and out of uniform perform their duties deserves unrelenting, serious scrutiny.

This debate about what happened and why, however, shouldn’t obscure an equally important and compelling obligation. The purpose of the U.S. military is to protect the nation and its vital interests. This is, in fact, the only legitimate use of coercive military force.

U.S. interests are still at risk in both the Middle East and South Asia.  We are still fighting and dying in Iraq and Afghanistan, and with the outcome there still to be determined. Post-mortems on how we lost are premature.  What’s needed instead is a vigorous debate about how America can do a better job protecting its place in the world in the future.

Serious critics would never throw up their hands and declare it’s all pointless. Their real interest is in hammering out responsible defense and foreign policies.

What we need to do is exactly what has been done in all the wars America has have won: figure out the difficult task of doing the right thing.