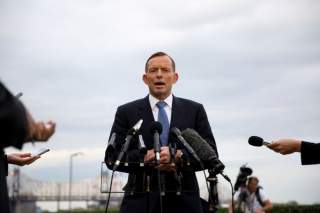 Be alert, not alarmed.

That was the theme of former Australian prime minister John Howard’s antiterrorism campaign in the wake of the 2002 Bali bombing that killed eighty-eight Australians, not long after the September 11, 2001 attacks in the United States.

While an active supporter of the U.S.-led “war on terror,” the nearest Australians had come to feeling threatened recently were the 2002 and 2005 bombings on the tourist island of Bali, a popular destination for Australian holidaymakers, along with an attack on the Australian Embassy in the Indonesian capital in 2004.

Yet with the Australian Security Intelligence Organization (ASIO) recently raising the nation’s terror threat level from medium to “high,” meaning an attack is considered likely, and with a number of Australians having joined Islamic State militants in Iraq and Syria, some Australian leaders have recently been warning that “complacency is our greatest enemy.”

On Monday, terrorism arrived in the heart of Sydney, but the apparent propaganda bid by a disgruntled, Iranian-born, self-styled cleric backfired spectacularly. Instead of causing division, Australia’s commitment to the global antiterrorist fight has been strengthened and the community drawn closer together, with Muslims and non-Muslims alike showing solidarity in the wake of the hostage drama.

Laying a wreath of flowers at the site of the siege Tuesday, New South Wales (NSW) state premier Mike Baird said on Twitter: “Deeply moving overflow of support for siege victims and survivors from the people of Sydney. This is who we are.”

“The instant we changed forever”

Australians had just started the working week when news broke that a gunman had stormed the Lindt Chocolate Café in the heart of Sydney’s central business district (CBD) around 9:45 am local time, seizing around twenty hostages. The café’s location in Martin Place, across the street from the Channel 7 newsroom and near other major buildings, including the central bank, made it a highly visible target, and soon news channels were broadcasting blanket coverage.

Fears escalated when around an hour later, hostages held a black Islamic flag up against the windows facing Martin Place, sparking concern about a potential jihadist attack by Islamic State or other militants. The normally busy Martin Place railway station was shut down and nearby buildings evacuated, with even performances at the famous Sydney Opera House cancelled as the CBD went into lockdown and hundreds of police moved in.

Australian prime minister Tony Abbott announced that Cabinet’s National Security Committee had convened to discuss the hostage situation, although he said the nation’s law enforcement and security agencies were “responding in a thorough and professional manner.”

During the afternoon, three café workers and two other hostages escaped while the nation watched on live television, gripped by the unfolding drama. In a special afternoon edition, a Sydney tabloid, the Daily Telegraph, headlined the story as “Death Cult CBD Attack – The Instant We Changed Forever.”

The terror suspect was identified as Man Haron Monis, 50, a “fake sheik” reportedly on the U.S. Federal Bureau of Investigation’s watch list who was well known to ASIO and other authorities, having recently pledged allegiance to Islamic State, as well as being charged as an accessory to his former wife’s murder, and with a string of sexual offenses.

Monis arrived in Australia from Iran in 1996, and soon thereafter claimed political asylum, claiming he had formerly worked with Iran’s feared intelligence ministry and his life was in danger. However, he also came to the attention of Australian authorities over hate mail he sent to the families of Australian soldiers killed in Afghanistan between 2007 and 2009.

During the hostage drama, Monis reportedly demanded an Islamic State flag and to speak with the Australian prime minister. He also tried to contact a Sydney radio station and newspaper, and uploaded three videos to YouTube of hostages broadcasting his demands, alleging that “this is an attack on Australia by ISIS,” while also claiming that there were three bombs placed around the city.

However, Australian media complied with police demands not to broadcast Monis’ messages during the siege, reportedly infuriating the gunman.

As night fell, Monis turned the lights out in an attempt to block police monitoring of the café and his seventeen hostages. But at around 2 am, as the gunman dozed, the café’s manager, Tori Johnson, reportedly lunged for Monis’ gun. Six hostages seized the opportunity to escape and police stormed the café, with Monis killed during the assault. Tragically, Johnson, 34, and 38-year-old barrister and mother of three Katrina Dawson were also killed, with six others injured in the firefight.

Commenting on the sixteen-hour siege, the Australian prime minister described Monis as “a deeply disturbed individual” who had a known “infatuation with extremism.”

“How can someone who has had such a long and chequered history, not be on the appropriate [terrorism] watch lists? And how can someone like that be entirely at large in the community?” he asked.

“Tens if not millions of people right around the world have been focused on the city of Sydney, which has been touched by terrorism for the first time in more than 35 years,” he added.

Internationally, the White House offered its support along with the British, Canadian, Indian and New Zealand leaders, with Indian prime minister Narendra Modi describing the tragedy as “disturbing” and “inhuman.”

Despite fears that the attack would ignite religious tensions, the response from political and religious leaders and the Australian public instead helped unite the community.

Islamic leaders, including Grand Mufti Ibrahim Abu Mohamed, the nation’s highest Islamic office holder, issued a statement condemning the criminal act “unequivocally,” saying that such actions “are denounced in part and in whole in Islam.”

NSW state premier Mike Baird said the nation would maintain its values, saying, “Whatever the test we will face it head on and we will remain a strong democratic, civil society.”

But it was a social-media post from a woman riding a Sydney train, who saw a Muslim woman quietly remove her head covering, which helped spark a broader community response. After offering to share the train journey with those wearing religious attire who “don’t feel safe alone,” the Twitter hashtag “#illridewithyou” quickly started trending worldwide, with more than 117,000 tweets over two days, including from Hollywood actor Russell Crowe.

In an outpouring of public sympathy for the hostage victims, tens of thousands of flowers were left at the Martin Place memorial, with florists unable to keep pace with demand as the memorial grew to half a block in size.

Flags on government buildings flew at half-mast Tuesday to honor the victims, with the NSW premier urging the community to “come together like never before.”

An Indian office worker caught up in the drama described his emotions at the memorial site: "It's just devastating. I came here to offer my prayers, give a moment's silence. My family and I, we have experience of this from Mumbai, the terrorist attacks there. You just don't expect it in Sydney, we're so far away from it all."

Yet for analysts, the drama has reinforced Australia’s commitment to the international antiterrorist effort, including the battle against the Islamic State in Iraq and Syria.

In September, Australia became the first nation to commit troops and aircraft to the U.S.-led coalition fighting Islamic State militants in Iraq, sending a 600-strong force comprising 400 air force personnel and 200 special forces soldiers to a U.S. base in the United Arab Emirates, as well as a number of fighter jets and other aircraft.

According to Reuters, up to 160 Australians have been involved in the fighting in Iraq and Syria or actively supported it, with at least twenty having returned home, posing a potential national-security risk. Around eighty Australians have had their passports cancelled due to concerns they planned to join the terrorist group, with a Foreign Fighters Task Force set up to handle the threat.

The Islamic State has responded by issuing a “fatwa” against Australia, among other countries, threatening both military and civilian personnel. Monis’ attack follows those of other so-called “lone wolves” in Jerusalem, New York and Ottawa in the wake of the ISIS threat, as well as a knife attack on two police officers in Melbourne, Australia.

In November, Australian foreign minister Julie Bishop warned the UN Security Council of the need to combat media-savvy “homegrown” terrorism, saying: “Terrorists are younger, more violent, more innovative and highly interconnected. They are masters of social media—to terrorize and to recruit—and are very tech savvy. They incite each other. They communicate their propaganda and violence directly into our homes to recruit disaffected young men and women.”

Asked about the impact of the Sydney siege, Rory Medcalf, director of the Lowy Institute’s International Security Program, said it would only serve to strengthen the nation’s efforts against terrorism, both at home and abroad.

“This crime or terrorist act, depending on how you choose to categorize it, has obviously awoken many Australians to the real possibility of terrorist violence on Australian soil, but I don’t think it’s as profound or as game changing an event as some commentators have suggested,” he said.