The Syria Crisis Has Evolved into an International Power Struggle 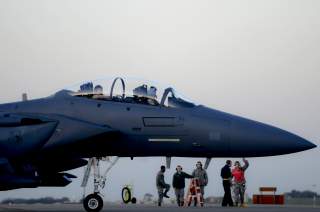 No doubt, as reflected by many voices in Washington, DC corridors of power and media, the recent American cruise missile strikes against Syria’s al-Shayrat Air Base in response to the Assad regime’s chemical attack on Khan Shaykhun in Idlib Province was hailed as the right thing to do. Moved by horrifying images of children losing their lives to the internationally banned Sarin chemical, President Trump apparently ordered the strikes to send a strong message to Syrian president Bashar al-Assad that, unlike his predecessor, he will not stand idly by when chemical red lines are crossed. But a string of statements by Trump administration officials on the heel of those strikes has created confusion over the nature and scope of American policy toward Syria. Those statements have also created a tense environment disposed to regional and international conflict.

While en route to Moscow for a high level summit, Secretary of State Rex Tillerson declared that the reign of President Assad was “coming to an end.” U.S. Ambassador to the UN Nikki Haley told CNN that “there’s not any sort of option where a political solution is going to happen with Assad at the head of the regime.” White House Press Secretary Sean Spicer portrayed Assad as darker than Hitler. He said that [Hitler] didn’t use gas “on his own people the same way that Assad is doing.” Conversely, the Kremlin called the attack an “act of aggression,” and Russian prime minister Dmitry Medvedev stated that the U.S. attack on an airfield in Syria was conducted “on the verge of a military clash” with Russia. Upon arriving to Moscow, Secretary Tillerson was given the cold shoulder.

Clearly, the Trump administration has made an about face of its initial stance on Syria whereby the focus was mainly on defeating the Islamic State. Is the objective now defeating the Syrian regime as a precedent to defeating the Islamic State, as some Arab allies, such as Saudi Arabia, have been clamoring? Is the objective painting the Assad regime into a corner to press for a political solution? Or is the objective deterring the Assad regime from using unconventional weapons? Whatever this may be, the Trump administration, unless it deftly seeks out a compromise with Russia over the Syrian crisis, has set itself on a slippery slope entailing serious consequences, including a military confrontation with Russia and/or its proxies.

In fact, the Russians, along with their allies in Syria (Iranian Revolutionary Guards, Iraqi Mobilizational Forces and Hezbollah) have concluded that the American strikes have taken place as part of a plan to undermine the Syrian regime, and by extension Russian and Iranian influence in the region in general, and the country in particular. For Russia and its allies, the Trump administration, by ordering the strikes, has fired the opening salvo in what they consider a strategic and existential conflict. The strikes came in the aftermath of a series of actions that left no doubt for Russia that the United States and its allies are laying the ground for rolling back whatever influence Moscow has enhanced in the Levant, Black Sea Region and Central Asia. In response to Russia’s seizure of Crimea, the West has led a systematic campaign of sanctions against Moscow, not only penalizing its economy but also its leadership and those associated with them.

No less significant, NATO has reinforced its presence in the Black Sea, fostering an offensive capability vis-à-vis Moscow. NATO members, led by the United States, completed in February the military exercise Sea Shield 2017, which involved a total of twenty-eight thousand military men from Bulgaria, Romania, Canada, Greece, Spain, United States, Turkey and Ukraine. Exercise participants used vessels, fighter jets and submarines. The exercise was the outcome of NATO’s Tailored Forward Presence (TFP) strategy, which strives to reinforce NATO’s presence “on land, at sea and in the air” in the Black Sea region. It is intended to check Russian maneuvering in the Crimea and Black Sea region. Moreover, the United States has increased the number of its troops in Poland, Romania and Bulgaria, and completed the operational deployment of the Aegis Ashore Ballistic Missile Defense site in Deveselu, Romania.

Russian officials have perceived NATO’s buildup and recent military exercise as threatening the interest and security of Russia. Moscow responded by reinforcing its naval presence in the Black Sea and its military presence in the Crimea and the Rostov region. That reinforcement included deploying sophisticated missile defense systems and deploying nuclear-capable Iskander systems in the exclave of Kaliningrad. Ominously, Russian military aircraft buzzed the USS Porter three times as it sailed near Russian waters during the Sea Shield naval exercise.

In response to NATO’s buildup of forces, Russian president Vladimir Putin said that NATO members “are provoking us constantly and are trying to draw us into confrontation.” Alliance members are continuing their attempts to “interfere in our internal affairs in a bid to destabilize the social and political situation in Russia itself,” he said.

It’s noteworthy that Crimea is of strategic and historic importance for Russia. Gained following a brutal war with the Ottoman Empire in 1774, Crimea served Tsarist Russia as a base from which it extended its influence in the Black Sea and completed its control over the then contested North Caucasus. The Crimean battle also catapulted Russia into the role of the protector of the Greek orthodox community in the Empire—a role that Putin has been trying to revive. Significantly, many Salafi jihadis from Chechnya and Dagestan of the North Caucasus have traveled to Syria to fight under the banner of the Islamic State. In this respect, Russian military involvement in Syria is strategically linked to fighting North Caucasus jihadis, reviving Russian role as protector of Middle East minorities, and using Syria as a leverage to maintain Moscow’s grip over Crimea.

Parallel to this development in the Black Sea region and Eastern Europe, the United States has been establishing military bases in northern Syria, including in Kobani, Qamishli and al-Tabqah. It has also acted, unlike in Iraq, in a military capacity rather than an advisory capacity. American troops have participated in some battles against the Islamic State in Syria and have deployed in areas separating the Kurds in Manbij from the Turkish forces (and their Arab allies) in al-Bab. From the perspective of the Russians and Iranians, these bases are meant to become a beachhead for American power. Their objective appears to be to undercut Iranian projection of power, as represented by extending the Shia crescent from Tehran to the warm waters of the Eastern Mediterranean, counter the influence of Russia in its only bastion of influence in the Middle East, and protect the Kurds as a spearhead of American power.

No less significant, Hezbollah has perceived any attempt to undermine the Syrian regime as equivalent to a potential coup de grâce to the Islamist party. Hezbollah regards Syria as its own strategic depth and an essential overland supply route for its weapons. As part of its military preparation for a possible future war with Israel, Hezbollah has been trying to expand its front to Syria so as to prevent Israel from severing the Islamist party from Syria and dealing it a severe blow in Lebanon. Consequently, Hezbollah has been entrenching its military positions in the Bekaa Valley, in the Qalamoun area straddling the Lebanon-Syria border, in southern Lebanon along Israel’s border and alongside the Israeli-Lebanese-Syrian border adjacent to the Golan Heights. It’s no secret that the Iraqi Popular Mobilization Forces and Hezbollah are preparing for a potential asymmetrical confrontation with American troops in both Iraq and Syria.

Taking all this into consideration, it becomes clear that Russia and its allies have common strategic interests in supporting the regime in western Syria and preventing the United States from changing the military equation of power. Accordingly, Russia and its allies will undoubtedly confront any American attempt in Syria that could threaten what they consider their strategic national interest. In fact, the prospect of an accidental military confrontation with Russia and/or its allies has not been greater. Apparently, the Syrian regime cannot stop its attacks on opposition groups, especially Salafi jihadis, before controlling the major urban centers from Aleppo in northwestern Syria to Daraa in the south, thereby protecting the capital and the approaches to the Alawi heartland of Latakia and the outlet to Eastern Mediterranean. This was clearly revealed when Syrian jets took off from al-Shayrat base virtually the next day after it was attacked. Significantly, Russian personnel, alongside their allies, are present across Syria’s fourteen major military bases to support the Syrian regime. Moscow has also placed the sophisticated S-400 air missile defense system in Syria, and in response to the American strikes it has suspended the hot line “deconflicting” agreement with the United States to prevent any flyover accidents over Syrian airspace.

Consequently, the United States, if it decides to follow up on its strikes as part of a strategy to undermine the Syrian regime or solely to help innocent Syrians against the indiscriminate violence of the regime in Western Syria, will run the risk of confronting Russia and/or its allies, let alone providing succor to the Islamic State.