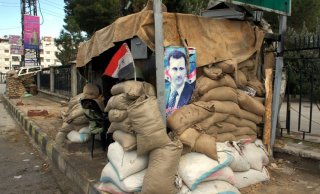 For more than four years, Syria has been locked in a vicious civil war. Around four million people have been uprooted. The nation’s cities have been reduced to rubble. Its economy, its polity and its geography all have been shattered. Those fighting the war have been barbarized; outside powers have made the war a playground for their own interests. There are few rules, few scruples, and little discernible order. It’s no longer even clear what peace or victory would even entail.

And so there’s little cause for optimism in Syria, particularly as rumors swirl of Turkish and Jordanian interventions and analysts speculate that an Iran nuclear deal may only see more cash and more arms flowing into the Assad regime’s coffers. The story is little different in Iraq, which has suffered its own bout of chaos. Yet the Levant’s current bloody stasis may be the first step on a road to denouement. Russia and the United States, who have favored opposite sides in the Syria conflict and, in the case of Russia, provided international diplomatic cover for the Assad government, are beginning to see eye to eye on one key point: the current path in Syria leads nowhere.

That was a implicit message of a panel discussion Monday at the Center for the National Interest, in which one of Russia’s top experts on the Middle East, Vitaly Naumkin, spoke alongside Paul Pillar, formerly one of America’s most senior intelligence officials covering the region. While neither was speaking on behalf of his government, the degree of accord between their assessments of the conflict was remarkable given their establishment credentials and the almost fundamental disagreements between Moscow and Washington on so many other present issues.

Naumkin, Director of the Institute for Oriental Studies under the Russian Academy of Sciences, stated that there are currently three main forces contesting the Syrian conflict: the government, the Islamic State group and the largely Islamist, sometimes Al Qaeda-friendly opposition. All three, he said, are determined to keep fighting, have little appetite for concessions, and hope to prevail on the battlefield. The conflict plays itself out on three levels: local, regional and global. The local balance of forces is relatively fragile: sometimes the government will appear to be winning, sometimes it will appear to be losing. The regional conflict is more predictable: Saudi Arabia and Iran appear willing to fight “until the last Syrian,” he said. The global aspect is more complicated, with efforts to reach a political settlement hindered by dissensus on the question of whether, when and how the Assad government would transition from power but, suggested Naumkin, the U.S. and Russian positions are slowly moving closer.

One key confounding issue, argued Naumkin, is the growing importance of the Kurdish question within Syria. The Syrian Kurds have many disagreements with the other actors and are regarded by Turkey as a more serious threat than the Islamic State group, yet they are quickly becoming a fourth force in the conflict. Furthermore, Naumkin stated that Kurdish leaders across the political spectrum in Turkey have suggested to him that they see the gains in “Rojava”—the Syrian Kurdish area—as a kind of model. That can’t be music to Erdogan’s ears.

Pillar, a contributing editor of this magazine and a former National Intelligence Officer for the Near East and South Asia and a career intelligence and terrorism analyst, suggested that there are presently many reasons to believe that the war in Syria won’t be ending anytime soon. First, he stated, the conflict has no clear trend toward a resolution; even reported dissatisfaction among the Assad regime’s constituents does not appear to be reaching a tipping point. Second, the war is multilateral, meaning that no single faction has a good chance of amassing a majority of power and support, and even if one faction is knocked out, the conflict is likely to continue. (Pillar pointed to the fall of Najibullah in Afghanistan and of Qaddafi in Libya as previous examples of this phenomenon.) Third, compromise is unlikely: the regime and its supporters see themselves as fighting a war of survival, while the nature of the Islamic State group means it is unlikely to pursue any settlements. Fourth, outsiders are also in discord, not just about which side to support but, in the case of the non-ISIS opposition’s backers, about which groups to support and how carefully to vet them. And while all three major factions are distasteful to the United States, noted Pillar, a moderate alternative is unlikely to emerge.

The U.S. training program for moderate rebels so far only has sixty alumni, according to the Secretary of Defense. Calls to relax vetting standards for U.S. support, Pillar warned, are dangerous given the well-documented tendency throughout the war for men and gear to change allegiances, yet the vetting itself will not get any easier—as Pillar put it, engaging in civil war is an inherently immoderate activity, civil wars tend to empower the most radical factions, and ideology and conduct during war can be an unreliable indicator of postwar political conduct. With all this taken into account, said Pillar, the most likely resolution for the war would be rather like Lebanon’s—with all sides’ mutual exhaustion eventually forcing a deal.