The Syria Strike: Are the United States and Russia On a Collision Course? 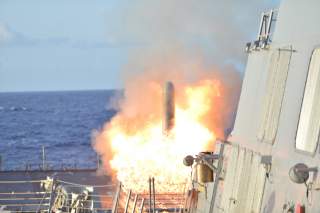 After reviewing the evidence and considering the options available to him, President Donald Trump ordered a proportionate strike on the Syrian air base where it is believed that the aircraft responsible for the chemical-weapons attack that occurred earlier this week in Idlib Province was based. According to different sources, the United States used its deconfliction channel with the Russian military to inform Moscow that a limited cruise missile strike against Shayrat Air Base would occur. There have been no reports that any Russian personnel were killed or wounded, or Russian assets damaged or destroyed.

Does this action now put Russia and the United States on a collision course in Syria? Does it end any possibility of cooperation between Moscow and Washington to work together to find a political solution to the Syrian Civil War while ensuring that groups like the Islamic State are not able to regain lost ground in the region?

President Trump, having made a series of statements about the events of the last several days, felt it necessary for the sake of his future credibility to take action and to show that he could and would act swiftly once he had made up his mind. The Kremlin seems to have understood that some U.S. response would be forthcoming—and while disputing the evidence that Bashar al-Assad’s military was responsible for the use of chemical weapons, also signaled that Assad did not enjoy an automatic blank check from Moscow. At the time of writing, the relative mildness of the Kremlin response suggests that Russia is not angling for a fight with the United States over Syria.

From the U.S. perspective, Assad appears to have tested the limits of the Trump team to act, particularly after recent statements that the new administration is not interested in making regime change in Syria a goal of U.S. action. However, the use of chemical weapons—either suggesting that the 2013 agreement was not honored in full, or that dangerous stockpiles are still loose in Syria—represents a threat to U.S. interests. Trump felt he had no choice but to act.

The Russian foreign-policy establishment may be working from the assumption that Trump is operating on the Ronald Reagan playbook. When faced with particularly noxious actions perpetrated by former Libyan strongman Muammar el-Qaddafi—whether establishing a “line of death” in the Gulf of Sidra or authorizing a terrorist bombing of a Berlin disco frequented by U.S. military personnel—Reagan responded with discrete, limited but decisive strikes that were meant to convey both U.S. anger but also to serve as a deterrent against future Libyan action. There were similar worries that forceful U.S. action against Libya might provoke a wider conflict with the Soviet Union or that Soviet advisors to the Libyan military might end up being killed, but careful and prudent limits set by the Reagan team minimized the risks of escalation.

Reagan’s limited strikes on Libya had the dual result of showing Qaddafi and the Soviets that the United States was willing to take decisive action, and did cause the Soviet leadership to take steps to try and restrain Qaddafi’s impetuousness. If that is the playbook that Trump is operating from today, then Moscow may not be prepared to foreclose on its hopes for a strategic dialogue with the United States on Syria. That the Putin administration is hoping that the U.S. response will remain limited seems apparent in the points raised by Russia’s deputy ambassador to the United Nations, Vladimir Safronkov, who invoked the U.S. campaigns in Iraq and Libya—sustained military efforts at regime change—as examples to be avoided in Syria.

Russia also has equities in not wanting a renewed breach over Syria, not simply because of the possible negative impact on U.S.-Russia relations, but because it could spoil the reconciliation with Turkey, create unneeded complications in Russia’s relations with Israel, and scuttle the cautious outreach to Saudi Arabia and the Gulf emirates that helped to bring about the oil production freeze that has benefited the Russian treasury via higher energy prices and saw Qatar invest in Russia’s state oil company.

So, the questions moving forward are whether the strike satisfies Trump’s need to show his displeasure at the “many lines” that were crossed, as he noted earlier this week; whether Russia chooses not to react (beyond words) to that strike; and whether Moscow will take new and vigorous efforts to show to the Trump administration, especially to Secretary of State Rex Tillerson, on the eve of his planned visit to Moscow and his first meeting with President Vladimir Putin, that Moscow can deliver on its commitments. The answers that will unfold over the next hours and days will be critical.