The Taliban Comes to the Table: Could the Afghan War Finally Wind Down? 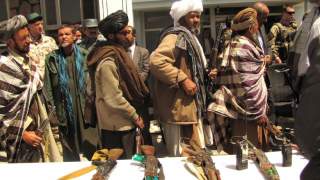 Earlier this month, representatives of the Afghan Taliban and Kabul government met in the Pakistani resort town of Murree in preliminary peace talks described as “breakthrough” by Pakistani officials. While there is ample basis for being cautious about the prospects of a negotiated settlement to the Afghan war, the Pakistan-hosted talks offer reason to be hopeful, particularly after receiving the tacit endorsement of Taliban founder and leader Mullah Muhammad Omar.

Last Wednesday, a statement attributed to the reclusive Taliban chief, alluding to the talks with Kabul, stated that “meetings and even peaceful interactions with the enemies is not prohibited” in Islam, including in times of war. The purported Mullah Omar statement significantly reduces the ambiguity surrounding the official Afghan Taliban position on the Murree dialogue. However, being merely a written message, it falls short of completely eliminating doubt about Mullah Omar’s views as it fails to provide proof of life. Speculation is growing over whether the Taliban founder, who has not been seen or heard publicly in years, is even alive.

What is clear is that there have been, and probably continue to be, differences within the Afghan Taliban’s ranks over the Murree talks and the overall idea of engaging with the Kabul government. These difference were made public through criticism from unnamed Afghan Taliban officials, as well as an article published on the Taliban website condemning the talks. However, the article was subsequently removed and was followed by a carefully-worded official statement from the Afghan Taliban that avoided endorsement or rejection of the Murree talks, while emphasizing the top role of the Doha office.

It appears that the Afghan Taliban as a whole have decided to give the talks a chance—probably due to the nudging, if not pushing, of the Pakistani military. The Afghan Taliban have made significant military gains across the country and have been in no mood to engage Kabul. But the Pakistani military managed to secure the attendance of representatives of the Peshawar and Quetta shuras as well as the so-called Haqqani Network. The talks, Afghan officials claim, have the backing of the Taliban’s deputy leader Mullah Akhtar Mansour, while the Taliban’s Qatar office and, according to some reports, commanders like Abdul Qayyum Zakir oppose the talks.

The Kabul government has been eager, if not desperate, over the years for validation from the Taliban; so its claims should be taken with a grain of salt. But at the same time, having been burned in the past by outreach to the Taliban that ended in disaster, officials in Kabul are unlikely to oversell the prospects of the current round of engagement.

Keeping the internal Taliban divisions in mind, Pakistan may have gambled in pushing a reluctant Taliban toward the negotiation table, risking the group’s fracture or a backlash against Pakistan. But Pakistan’s desire to err on the side of risk signals the sense of urgency its strategic planners have toward securing peace in Afghanistan and bolstering ties with the Kabul government. Indeed, the Murree talks are evidence of a good faith effort by Pakistan, especially its military leadership, to facilitate an Afghan-led negotiated settlement to the war.

Since last fall, the Pakistani civilian and military leadership and the Afghan government led by President Ashraf Ghani have worked to improve ties. In addition to stepping up pressure on the Afghan Taliban to come to the negotiation table, Pakistani officials, including Prime Minister Nawaz Sharif and Chief of Army Staff General Raheel Sharif, have not only repeatedly said that Afghanistan’s enemies are Pakistan’s enemies, but have also boldly condemned the Afghan Taliban’s military offensive. Meanwhile, Afghanistan has distanced itself from India and has reduced support for Pakistani Taliban factions that target Islamabad. President Ghani has also authorized drone strikes on Pakistani Taliban groups based in Afghanistan.

But an unabated Taliban offensive this year depleted much of the goodwill between Kabul and Islamabad that had developed since last year. In recent weeks, Afghan officials, including President Ghani, resumed direct criticism of Pakistan, and Afghan and Pakistani security personnel exchanged deadly fire along their shared border.

The Murree talks helped reverse this downturn in Afghan-Pakistani bilateral relations. But skepticism, if not animosity, toward Pakistan is a veritable part of the Afghan psyche, and a single meeting will not undo Afghan perceptions that have developed over the years. Pakistan-skepticism will erode in Afghanistan if the Taliban talks prove to be sustained and the on-the-ground reality for Afghans changes, i.e. a meaningful reduction in terrorist and insurgent violence. But sustaining the Kabul-Afghan Taliban dialogue process will be a challenge, for multiple reasons.

One, the Afghan Taliban leadership has demonstrated weakness in controlling local commanders. For example, annual military guidelines attributed to Mullah Omar have prohibited the targeting of civilians. But Afghan civilians are dying in increasing number in Afghanistan, and the greatest culprit is the Afghan Taliban.

Two, maintaining the cohesion of the Taliban will be increasingly difficult. Small factions of the Afghan Taliban are defecting to the so-called Islamic State (IS). And other groups, such as the Islamic Movement of Uzbekistan, are tilting toward IS and criticizing the Taliban central leadership. Commanders keen to continue the fight could join IS, though a relentless U.S. drone campaign targeting the IS regional leadership since January has helped contain the group. Indeed, the United States is indirectly helping the Afghan Taliban maintain its supremacy over IS.

Three, there is the question of how to sell the dialogue process and an eventual agreement to Taliban field commanders, especially with a continued U.S. and NATO military presence in Afghanistan. For years, the Afghan Taliban has described its mission as one to evict foreign occupiers, overthrow the “puppet government” in Kabul, and revive the Islamic Emirate led by Mullah Omar. It’s hard to imagine Afghan Taliban fighters laying down their weapons as troops from Nebraska and Nevada remain present on Afghan soil. At the same time, Kabul is heavily dependent on Western forces for air and logistical support, as well as special operations. Perhaps some of the void left by departing western forces could be filled by non-neighboring, Muslim-majority states like Jordan, Turkey, and the United Arab Emirates—though, given the regional sectarian war, Iran may be discomfited by the growing presence of Sunni militaries in a neighboring state.

While the glass is half empty, it’s also half full. The Afghan Taliban in many key ways are a distinct group from IS. In its public statements, the Afghan Taliban have been keen to recognize the nation-state system. It has sent envoys to atheist China, postmodernist Norway, and Shia Iran. In fact, the next round of dialogue between the Afghan Taliban and the Kabul government may take place in China. In Norway, Taliban officials met with Afghan parliamentarians, including women; and Taliban officials have made repeated statements against both ethnic violence and sectarianism.

It may be that the rise of IS has lowered our expectations for other jihadist groups; but with the Afghan Taliban finally engaging Kabul, improved ties between the Afghan and Pakistani governments, and both Beijing and Washington endorsing the embryonic dialogue process, Afghans might finally see the peace they deserve.