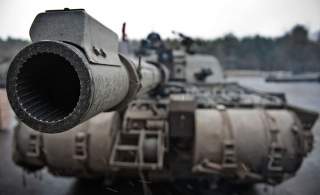 What do you give a tank for its birthday? A bigger gun or a fresh coat of paint? Maybe a nice cup of motor oil?

The occasion was more auspicious in the history books than on the battlefield. Flayed by barbed wire and mowed down by machine guns, the British hoped that the new “landships” would break through the German trenches. But instead of breaking through, they broke down; the twenty-eight-ton Mark I tanks, moving at a glacial two miles per hour, proved mechanically unreliable.

Forty nine tanks were on hand that day, supposed to reach the German front lines on a six-mile front about five minutes ahead of the first infantry wave. Most broke down or ditched, many before they even reached the departure line. Of the 18 that participated effectively, some arrived alongside their infantry or even behind them. Others lost their way and fired on their own men. In time shellfire or even bullets striking fuel lines incinerated those still in action. When they did break through, they devastated enemy defenses, and in the village of Flers one of them drove up the main road, firing sideways, as cheering troops followed behind. Then they provoked some local panics, by the Germans’ own admission. But mostly they bogged down, like the attacks themselves.

The horse cavalrymen, who had already galloped into technological oblivion by 1916, could be forgiven a last smirk at the newfangled contraptions littering the battlefield like beached whales.

But the tankmen had the last laugh. Just two years later, at the Battle of Amiens on August 8, 1918, the British offensive shattered the German lines with more than 500 tanks: the German commander Ludendorff called it “the Black Day of the German Army.” Just 25 years later, the German army conquered most of Europe with tanks. Today's armored vehicles, equipped with computers, laser rangefinders and defensive systems to detonate incoming anti-tank rockets, seem like spaceships compared to the rhomboid-shaped monstrosities at the Somme.

How do you sum up the existence of the tank, a weapon that reshaped warfare? Since it's a birthday, we'll treat it as a celebration of life, though we should never forget that we are speaking of a weapon of death. Because in many ways, the life of the tank has paralleled human life.

The tanks that barely managed to clank into history at the Somme were in their infancy. Like a newborn, it was not clear how big they would grow, what they would ultimately grow up to look like and most importantly, what would be their place in the world.

World War II was the tank as a young man in the prime of life. Strong, fast and vigorous, tanks became a measure of power in which a nation's strength was defined by how many tanks it had. The technological and industrial capability to design and manufacture tanks told the world that a nation was a major military power.

After World War II, the tank became middle-aged. Jet aircraft and nuclear weapons became the most potent symbols of the Cold War. The widespread use of man-portable anti-tank missiles and rockets, which allowed even a barely trained guerrilla to destroy armored vehicles, meant that tanks were no longer kings of the battlefield. Now tanks would have to be family men, working closely with their brothers in the infantry and artillery.

The question now is whether the tank is middle-aged, grayer but still formidable. Or is it sliding into old age, increasingly rendered superfluous by smart weapons and drones? Perhaps tanks will become drones, remote-controlled robots with stealth capabilities quietly stalking the battlefield.

My bet, for whatever it is worth, is that tanks are here to stay. They are not just machines. They are concepts, the steel embodiment of the belief that combining firepower, protection and mobility into a single package creates a sum that is greater than its parts. Whether a Mark I or an M-1, and whether a human or a computer sits in the turret, the tank is just too powerful an idea to be discarded on the junk heap.