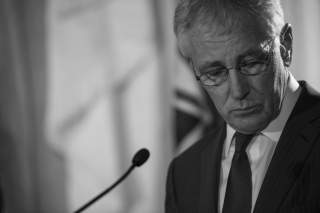 If defense policy were a yo-yo, the Pentagon would be at the end of its string. That’s the discouraging takeaway from Defense Secretary Chuck Hagel’s recent speech at the Reagan Presidential Library in Simi Valley, California.

The annual gathering there resembles a “Davos for defense.” Most everybody who’s anybody in the national-security community attends. Hagel’s talk was to be the highlight of the event. Instead, it was a rambling disappointment.

He ended by shoehorning in what was meant to be the Big News. “Today,” Hagel said, “I’m announcing a new Defense Innovation Initiative— an initiative that we expect to develop into a game-changing third ‘offset’ strategy.” The idea is that the Pentagon will offset the growing gap between U.S. capabilities and missions with a patch of new technology that will extend the armed forces’ competitive advantages over potential adversaries.

It’s no surprise that, after a half-decade of decline in American military capabilities, Hagel felt the need to promise a ready solution. But banking on nonexistent technology is an empty promise. Moreover, it’s the kind of fairy dust with which Washington is all too familiar.

Over the last seventy-five years, American military strength has bobbed up and down like a roller coaster. The “total effort” buildup that won World War II was followed by drastic reductions that left the military unprepared for Korea. After a spurt of spending, the military hollowed out during the Vietnam War. The Reagan buildup followed. Then the Wall fell, and defense drifted downward under Clinton. The 9/11 attacks triggered a new buildup, which has been succeeded by the Obama era’s slouching toward a hollow force.

Throughout this period, every time “peace-dividends” started eroding core capabilities, the Pentagon brass responded with one of three predictable responses.

The easiest, albeit wholly inadequate, response is to promise to close the gap with “efficiencies.” Just as politicians are fond of telling us that rooting out “waste, fraud and abuse” will somehow magically balance the entire federal budget, so Pentagon brass are often persuaded to assure us that they will find “efficiencies” that have eluded their predecessors, and that these as-yet-to-be-identified efficiencies will magically make up the shortfall between what the force needs and what the budget provides.

McNamara tried that one, and failed. Unfortunately for Hagel, Gates tried it, too, earlier in this administration. Had Hagel tried to revive that old wheeze, he would have been laughed out of the room. The 2014 report by the congressionally chartered, bipartisan National Defense Panel documents just how wide the gap has grown between what the Pentagon has and what it needs—even after the Gates “efficiencies.”

Option Two is to just give the armed forces what they need to close the shortfall. That was Ronald Reagan’s solution. Pressure is building in Washington to get the Pentagon beyond sequester, so it’s not completely beyond the realm of possibility that Mr.Obama might propose to increase defense spending as he prepares to leave the Oval Office next year. But for now, Hagel cannot preempt the president’s FY2016 budget proposal, which means ruling out more money.

So Hagel had little choice but to go with Option Three, another “easy button” solution: the promise that we’ll fix declining capabilities by deploying new technology.

The Secretary offered no details that would suggest he considers technology to be a serious strategy for overcoming our deteriorating defenses. Basically all he said in his speech was that his Pentagon would spend the next two years planning to have a plan. That is not a plan.

Second, basing a strategy on technological innovation that is not in hand is nothing more than wishful thinking. It would be like Taft’s Secretary of War, Henry Stimson, planning to fight World War I with nuclear weapons. Game-changing technology happens when it happens—not on-demand, like cable. Indeed, betting on technology that’s not mature often leads to deploying technology before it’s ready, which in turn leads to the kinds of massive cost overruns and delays a cash-strapped Defense Department can ill afford. Of course, the United States should always be seeking out technologies that offer decisive competitive advantages, but that is not the basis for a sound strategy.

Hagel pointed to Eisenhower’s New Look strategy as an example of the kind of approach he was pursuing with the Defense Innovation Initiative, but this historical analogy offers little reason for optimism. In the end, the Soviet’s matched Ike’s techno-crunch, resulting in a nuclear-arms race that wiped out America’s competitive advantage and produced enough nuclear weapons to kill the world many times over.

Secretary Brown’s offset strategy was more myth than reality. As the Carter presidency crashed and burned, the administration made a late-term bid to resurrect its national-security credentials by proposing higher defense budgets and a new generation of technology. It was more politics than a serious strategy. The magic solution didn’t save the Carter presidency, nor did it rebuild U.S. military capabilities.

Hagel’s speech won’t save the Pentagon, either. What will make a difference is a serious defense investment program along the lines sketched out by the National Defense Panel. If the secretary had endorsed that, he would have made real news. But, he never mentioned the panel’s findings in his speech. It’s much easier just to spin the defense yo-yo.

A vice president of The Heritage Foundation, James Jay Carafano directs the think tank’s research into national security and foreign policy issues. You can follow him on Twitter: @JJCarafano.