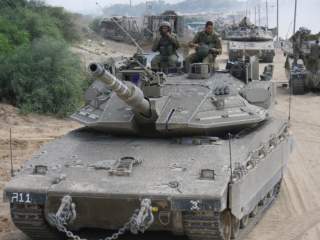 I used to believe that too, or at least accepted the argument that U.S. reassurance to Israel was vital in getting it to make concessions to the Palestinians. The analogy was to the way the U.S. commitment to Britain and France after 1947 made possible a more lenient treatment of Germany—an adroit maneuver that must still be regarded as one of the finest moments of twentieth-century American statecraft. But the argument today, as applied to Israel, appears increasingly otherworldly; it founders on the fact that the Israelis don’t want to make peace with the Palestinians at any reasonable price and have nothing close to a governing coalition willing to make the concessions required. After all these years of negotiation, the Israelis refuse to produce a map for a peace accord they would find acceptable, as if vague generalities would suffice for a serious proposal. One can only conclude that unlimited and unconditional U.S. support has bolstered and will continue to bolster the expansionists among them. Certainly it has done nothing to weaken or restrain them. Fifteen years after the breakdown of Oslo, the settlement project continues, with 650,000 Israelis living in the occupied territories as of May 2011. There were 129,200 in 1995. This is not the conduct of a government and people who wish to give these territories up. It also dooms Israel to eternal domination of and conflict with the Palestinians. Truly, the Israelis have got the wolf by the ear, and can neither hold him, nor safely (so they believe) let him go.

Realists are among the sharpest critics of Israel but, realistically, there seems nothing in prospect that would dislodge the force of Israel’s support in America. It would be wishing for a different political system, a different culture, a different intellectual milieu from those which we have come to inhabit. I hope that change will come; I do not see it on an even intermediate horizon. If the four great thrashings of the last eight years have not sufficed to bring about a change in view, what would? Bad as the current war is, it is as yet no worse than Operation Just Reward in Lebanon (2006) or Operation Cast Lead in Gaza (2008-09).

The American people’s deep reluctance to venture on another Middle Eastern war does operate as a strong barrier to the war Israel wants America to fight with Iran, but that reluctance may not be sufficient to get a nuclear agreement with Iran or, if one is gotten, to get it passed through Congress. At least, however, there are now potent forces in American domestic opinion barring a preventive war against Iran; nothing comparable to that exists with respect to restraining Israel’s actions in its immediate neighborhood.

We are thus forced back, for want of anything better, to hoping for a change in Israeli consciousness on two key points: one would have them be far more discriminate in the use of force; the other would have them use more humanitarian methods (e.g., lifting the siege of Gaza) as a way of encouraging more pacific tendencies in the Palestinian population. More Machiavellian economy in their approach to force, let us say, and more Guicciardinian kindness in their administration of the occupied territories. These days, however, either wish seems more like an impossible dream than a plausible future course. Israel wants to follow the method of Thrasybulus, and its own untroubled conscience is just about the only thing that stands in the way.

David C. Hendrickson is professor of political science at Colorado College. He is the author of Union, Nation, or Empire: The American Debate over International Relations, 1789-1941. (Kansas, 2009). His blogs include What They Think and IR and All That.