The Time for 'Strategic Patience' Is Over. Donald Trump Must Confront North Korea. 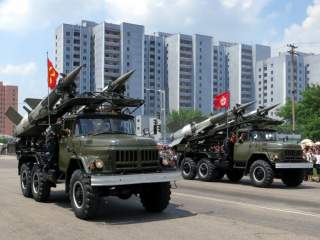 EACH OF the last three presidents has arrived in the White House to find a terrifying file on his desk entitled “North Korea,” full of grim warnings about an isolated hermit kingdom bent on developing nuclear weapons that could reach the continental United States. Each was urged to do everything in his power to prevent this nightmare. Yet each ultimately chose to look the other way and relegate North Korea to the category of future problems that someone else will have to deal with. They all tried some mixture of negotiations and sanctions to persuade the North Korean regime to back off. And when that failed, they simply played for time, hoping Pyongyang would eventually return to the table for serious talks. The Obama administration even devised a name for waiting it out—“strategic patience.”

Donald Trump will have no such luxury. Given all the other problems and crises that will fall into his lap, he too will be tempted to downgrade North Korea to the second tier. But Trump will not be able to punt. This time, it really is different. After five nuclear tests, a flurry of missile launches—some failures, but some at least partial successes—and advances in warhead miniaturization, North Korea’s nuclear program now has a critical mass that can no longer be avoided. James Clapper, the outgoing director of national intelligence, gave the game away last month when he admitted that getting North Korea to give up its nuclear program was now “a lost cause.” Nuclear weapons, he admitted, are “their ticket to survival.”

So what can Trump do differently? One of the reasons that the previous three administrations stuck to the same failing path is that the other options were so poor. Those options are no better now that Pyongyang is on the verge of being an actual, rather than potential, threat to the United States. But he will have to try something.

Given North Korea’s advances, there has been a surge of talk about potential preemptive strikes on its missile facilities, including from figures such as Mike Mullen, former chairman of the Joint Chiefs of Staff. But President-elect Trump would have to take into consideration the same risks that have always made this a Hail Mary—the potential damage to Seoul as Pyongyang unleashes a missile avalanche in retaliation. China might also feel obligated to come to the defense of its treaty ally.

Alternatively, Trump could order his administration to swallow its pride and return to the negotiating table—before North Korea has made any concessions. He could frame this as recognition of reality and argue that no one has actually tested Kim Jong-un to see if he has any room for flexibility. And what about the potential theater of a Trump-Kim summit? He would own cable news for a week.

But the objective of a new round of talks is unclear. If the argument were that the United States needs a new approach because North Korea is on the verge of becoming an undeniable nuclear power, why would it make concessions in new negotiations? Pyongyang would likely push for a series of commitments from Washington that would upend security arrangements for the entire region. And although the United States would issue a denial, it would look to the world as if Washington were recognizing North Korea as a legitimate nuclear power—Pyongyang’s ultimate objective. The domestic politics are also lousy for Trump. He is already preparing for bruising fights with Senate Republicans over things he sees as his actual priorities, such as infrastructure funding. Does he really want a major battle over North Korea?

That leaves one other option, and the one nonmilitary approach that has never been tried: China sanctions. Every direct sanction the United States has thought of has been applied on North Korea. But that is not the case with most of the Chinese entities that trade with Pyongyang and are its effective economic lifeline. The objective would be to impress on Xi Jinping that the United States is at its wits’ end. Either China really puts the squeeze on its ally to give up its nuclear weapons, or it will feel the impact. More missile defense in South Korea and Japan—something Beijing would hate—could also be on the table. There is no guarantee of success, of course, but the Trump administration can suggest that if this approach fails, the pressure for a U.S. preemptive strike will grow and grow and grow.

The one thing Trump has said about North Korea is that the United States should leave it to China to solve the problem. That will not happen by itself. Trump will need to give Beijing some encouragement.

Geoff Dyer writes about U.S. foreign policy for the Financial Times and is the former bureau chief in China and Brazil. He is the author of The Contest of the Century: The New Era of Competition with China—and How America Can Win.