The Tipping Point: Has the U.S.-China Relationship Passed the Point of No Return? 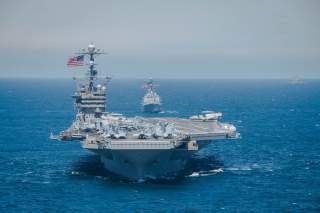 Conflict between a rising power and an established power is not inevitable as most realist scholars suggest. However, in every relationship, there is a tipping point or a point of no return, and China and the United States are rapidly approaching this point. As traditional diplomatic outlets have done little to resolve the more challenging issues presently affecting the Sino-American relationship, these two great powers have been increasingly relying on their military capabilities and hard power tactics. That’s especially true in the South China Sea, which is one of the single greatest points of contention between China and the United States. While there is a realization on both sides of the Pacific that a kind of strategic stability is necessary to prevent great power conflict, both China and the United States remain unwilling to compromise and make the kind of meaningful concessions required to move the relationship further from confrontation and conflict and closer to cooperation and rapprochement. Instead, these two countries are drawing lines in the sand and preparing for the worst.

China’s proposed solution to the Sino-American strategic stability issue is the “new model of major-country relations,” which encourages the United States and China to avoid confrontation and conflict, respect one another’s political systems and national interests—specifically China’s core interests—and pursue win-win cooperation. China is exceptionally enthusiastic about this proposal and brings it up at every high-level Sino-American meeting. Chinese enthusiasm for the “new model of major-country relations” can be explained in a number of different ways. American acceptance of China’s proposal would facilitate Beijing’s rise, legitimize the Chinese Communist Party (CCP) as a leader for national strength and revival and reduce the likelihood of American containment. As acceptance of the “new model of major-country relations” would create an international environment conducive to China’s rise, it would essentially allow China to become the preeminent power in Asia without great power competition or conflict. This proposal also has the potential to put China on par with the United States, to elevate it to an equal status, one acknowledged by the United States. Not only would American recognition of China’s strength and power have effects abroad, but it would also stoke Chinese nationalism and strengthen CCP leadership at home. Furthermore, this new model is a means of establishing a new code of conduct for the Sino-American relationship that is more in line with Chinese national interests, opening the door for the creation of a Chinese sphere of influence in Asia and, potentially, a Sino-centric regional order.

Prior to the recent meeting between Xi Jinping and Barack Obama, Xi announced that China’s proposed “new model of major-country-relations” would be an important discussion point for the meeting, but, while this proposal was brought up during the meeting, no clear progress was made. Because U.S. leaders believe that the “new model of major-country relations” is not in America’s best interests, the United States has repeatedly dismissed China’s proposal. As the hegemonic power, the United States maintains its power by dominating global politics; to accept a geopolitical framework alternative proposed by a strategic rival requires sacrificing a certain amount of power and influence. Along those same lines, acceptance of China’s proposal might give other states in the international system the impression that the United States is in decline and on the losing end of the classic “Thucydides trap.” Outside of traditional power politics, the call for the United States to respect China’s “core interests”— as many Chinese and foreign scholars have noted—is a loaded statement. While the United States is not opposed to respecting a state’s national interests, it tends to be unwilling to respect national interests which are highly contested, which is the situation for the majority of China’s “core interests.” In addition to traditional Chinese national interests, such as Taiwan, Tibet, and Xinjiang, China’s “core interests” also cover most of its territorial claims in Asia. The United States is concerned that China’s “new model of major-country relations” is a ploy designed to trick the United States into acknowledging China’s extensive territorial claims and undercutting the interests of American allies and long-time strategic partners in the Asia-Pacific region, which would likely result in the weakening of the American-led “hub-and-spoke” security structure, a security framework China hopes to replace with its New Asian Security Concept. There are also suspicions in the United States that China’s proposal is a call for the creation of spheres of influence, a concept to which the Obama administration has been consistently opposed.

America’s approach to Sino-American strategic stability is to have China and the United States focus on cooperation and agree to avoid letting competition in one area affect cooperation and collaboration in others. In many ways, this resembles China’s old “shelving disputes and pursuing joint development” strategy for Asia. As this kind of strategy is the geopolitical equivalent of sweeping dirt under the rug, it is only effective to a point. Eventually, the dirt spills out. Sooner or later, unaddressed problems surface. At best, this approach is only a temporary stop on the road to functional strategic stability. At worst, this approach has already outlived its usefulness. China views this strategy as an attempt by the United States to avoid addressing China’s demands that the United States acknowledge China’s rise to great power status and redefine the relationship accordingly, which only encourages the already strong Chinese desire to push forward the “new model of major-country relations.” China and the United States are at an impasse regarding strategic stability. While both states have made commitments and promises to prevent great power conflict, neither China nor the United States has developed a reasonable or implementable solution for Sino-American strategic stability. Thus, competition continues unmanaged, unchecked and confrontation is steadily evolving into conflict.

Drawing Lines in the “Sea”

The problems pushing the Sino-American relationship towards conflict are numerous and diverse, but if you are looking for the issue most likely to cause conflict, you need look no further than the South China Sea. China perceives the territorial disputes in this area as issues in which aggressive foreign state actors led by the United States are threatening China’s territorial sovereignty. For China, because of its history, territorial sovereignty issues implicate regime survival in a way that transcends all other quarrels and disagreements. The United States, on the other hand, views China’s territorial claims and actions to bolster those claims as Chinese expansionism, aggression against American allies and strategic partners, and a threat to the guiding principles of the liberal world order—which the United States views as crucial for the preservation of America’s global hegemonic power.

The situation in the South China Sea has been steadily escalating for several years now. In April, 2014, American defense secretary Chuck Hagel met with Chinese defense minister Chang Wanquan. During the meeting, Hagel said, “All parties should refrain from provocative actions and the use of intimidation, coercion, or aggression to advance their claims. Such disputes must be resolved peacefully and in accordance with international law.” Chang replied, “I’d like to reiterate that the territorial sovereignty issue is a Chinese core interest. On this issue, we will make no compromises, no concessions. Not even a tiny bit of violation will be allowed.” The inability to discuss openly or compromise on this issue has made it impossible to resolve and has led to escalation and increased tension.

In the aftermath of this meeting, China began investing heavily in island construction and land reclamation activities in disputed waters. As these activities have stirred up a lot of dust in the region, the United States has demanded that China abandon its present course of action, insisting that it is provocative and negatively impacting regional peace and stability. Not only has China dismissed America’s demands, it has also increased its military presence in contested areas in order to establish anti-access zones. While China claims that its actions are within the scope of international law, the United States asserts that Chinese actions are in violation of the law of the sea and laws for the regulation of the international commons. China argues that the South China Sea issue is a territorial sovereignty issue, yet the United States regards this issue as a freedom of navigation dispute, as well as a fight for the preservation of the international legal system—a cornerstone for the American-led liberal world order.

In August of this year, the United States launched its new Asia-Pacific Maritime Security Strategy, which aims “to safeguard the freedom of the seas, deter conflict and escalation, and promote adherence to international law and standards.” The Asia-Pacific region is now at the heart of the American naval security agenda. In response, Chinese foreign ministry spokesperson Hong Lei said that China “opposes any country’s attempt to challenge China’s territorial sovereignty and security under the pretext of safeguarding navigation freedom.” Responding to Chinese criticisms of America’s new regional maritime security strategy, American Defense Secretary Ashton Carter stated, “Make no mistake, we will fly, sail, and operate wherever international law permits…We will do that at times and places of our choosing.” In 2014, the United States carried out “freedom of navigation” exercises in various parts of the world and challenged the territorial claims of 18 different countries; however, the United States has yet to officially challenge China’s claims in the South China Sea. But, that may soon change, as the United States is currently considering sending American naval vessels within 12 nautical miles of China’s artificial islands in order to force China to end its land reclamation activities.