The Top 5 Reasons to Sign a Nuclear Deal with Iran 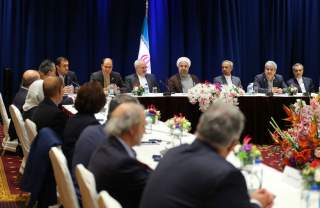 As the November 24 deadline to reach a nuclear deal quickly approaches, reports are indicating that it could be extended should the upcoming talks in Vienna fail to yield a comprehensive agreement. This should not suggest that the talks are breaking down, but rather quite the opposite. The negotiating parties are aware of the importance of reaching a historic nuclear deal that would resolve a twelve-year dispute, not the least due to the benefits such an agreement would carry. Below are but a few of these benefits that stand out.

Successfully negotiating an end to the nuclear dispute with Iran will avert a disastrous military conflict in a region already enmeshed in strife. Considering the tacit cooperation between the United States and Iran against the Islamic State of Iraq and the Levant (ISIL), conflict between these two would be untimely and would surely derail parallel efforts against the extremist group. As the world faces major international issues, such as the rise of ISIL and other extremist groups, the deterioration of U.S.-Russian relations, the ongoing Israeli-Palestinian conflict and tensions in the Asia Pacific, the relationship that was once marked by brinksmanship is now among the most stable and contained international issues facing both Washington and Tehran.

To be sure, the Obama administration is aware that airstrikes against Iran’s nuclear facilities would merely delay its program and could have the opposite effect of the expected outcome, encouraging Tehran to end its cooperation with the United Nations nuclear watchdog (the IAEA), leave the Nuclear Non-proliferation Treaty and potentially make the political decision to “go nuclear.” For these reasons, a clear benefit of a nuclear deal would be the prevalence of diplomacy and peace over military action.

A nuclear deal with Iran will guarantee that Iran’s nuclear capacity remains exclusively peaceful with no possible military dimensions and with enough time for the international community to detect a breakout, should Iran ever feel the unlikely need to “dash for the bomb.” Through a comprehensive agreement, Iran would cap its uranium enrichment to 5 percent and would have a mutually agreed limit on the number of centrifuges it would operate. Iran would also either convert its stockpile of enriched uranium to oxide or ship it overseas, potentially to Russia as it has been recently suggested.

Further, the plutonium path to a bomb would also be obstructed in the wake of a nuclear agreement, as Tehran could be required to modify its heavy-water reactor in Arak to reduce the annual enriched-plutonium production capacity to a level too low for the production of nuclear weapons. What is more, Iran’s nuclear program will have a maximum level of transparency. Under a comprehensive nuclear accord, Tehran will likely have to continue implementing the IAEA Safeguard Agreement and adopt the Subsidiary Arrangement Code 3.1, as well as the Additional Protocol, which allows for snap inspections.

President Obama’s secret letter to Iran’s Supreme Leader stressing that any cooperation against ISIL was contingent upon Iran reaching a nuclear deal with the so-called P5+1 highlights the overlapping strategic interests between the United States and Iran.

These shared interests do not end at ridding the region of ISIL. Both countries would like to see a significant decrease in sectarian strife across the broader Middle East; both have influence in Afghanistan and Iraq and an interest in ensuring their stability; and both would like to see the crisis in Syria resolved in a way that prevents the country from being a perpetual breeding ground for extremism. Other areas of cooperation could also include countering drug trafficking out of Afghanistan and Pakistan, combating piracy in international waters and working with Iran to become an alternative source of natural gas to Europe, negating the need for Russian supplies during this time of deteriorated relations between the West and Moscow.

A nuclear deal does not necessarily mean that the United States and Iran will be “besties,” but it could allow Washington and Tehran to de-conflict their interests in the region. This is already occurring in Iraq, where both countries are tacitly cooperating in the fight against ISIL through Iraqi intermediaries. Indeed, the United States alerted Iran ahead of its initial airstrikes in Syria in September. A nuclear deal could pave the way for the broader de-conflicting of regional interests, which could in turn lead to a form of sustained détente between the two.

Economic sanctions imposed on Iran by the United States, the European Union and others have significantly restricted international commercial opportunities with Iran, negatively impacting the Iranian economy, as well as having an impact on the global economy through foregone commercial activity. Increased economic relations with Iran could only help strengthen the global economic environment.

Even while under the duress of sanctions, Iran has managed to be the second-largest economy in the Middle East and North Africa after Saudi Arabia. Iran ranks second in the world in natural-gas reserves and fourth in proven crude-oil reserves. It has well-developed processing and manufacturing capabilities, a strong industrial base, an educated workforce and a potential consumer market of over 77 million. Although Iran’s economy has contracted as a result of U.S., EU and UN sanctions aimed at its oil exports, key economic sectors such as the auto industry and the financial sector, a comprehensive nuclear deal will provide Tehran with much-needed sanctions relief and, as noted by Acting Deputy Secretary of State Wendy Sherman, “the world will flood into Iran.”

The U.S. economy could also benefit directly if sanctions are lifted. A recent study reveals that between 1995 and 2012, the United States lost as much as $175 billion in potential export revenue to Iran, as well as close to a yearly average of about 60,000 lost job opportunities for Americans. A direct financial line between the United States and Iran has also reportedly been placed on the negotiating table with Iran. Such a mechanism could surely facilitate commercial transactions in the aftermath of a nuclear deal and reassure businesses globally in a postsanctions era that Iran is safely open for business.

During his 2013 presidential campaign, Iranian president Hassan Rouhani promised to uphold the constitution by guaranteeing the “rights of the people.” Although the power of the presidency is limited in Iran, once a nuclear agreement is in place, the Rouhani administration will be politically emboldened and be better positioned to address human-rights issues such as prisoners of conscience, minority and women’s rights, social, press and internet freedoms and capital punishment. It is important to note that Iran’s government is politically complex and not monolithic, with different factions competing with one another and in some cases working to sabotage President Rouhani’s efforts to negotiate a nuclear deal. If he succeeds in negotiating an agreement, he could be rewarded with political capital and a vote of confidence from the Supreme Leader, allowing him to maneuver on a variety of domestic issues, including human-rights conditions. In this regard, a nuclear agreement can only help.

The benefits of a nuclear deal are clear. Those contending otherwise and advocating for additional sanctions and obstructing any meaningful engagement between Washington and Tehran should outline their own list of benefits that their actions would lead to. Now is the time to finally resolve the long-standing nuclear dispute with Iran. In doing so, negotiators from the P5+1 and Iran will be working in earnest this coming week, and potentially during the next few months in the case of an extension, to reach a nuclear accord that will greatly benefit the world.

Navid Hassibi is a Non-Resident Fellow with the Washington DC-based Nuclear Security Working Group and a doctoral candidate with the Research Group in International Politics at the University of Antwerp. He is the author of Deterrence in an Era of Iranian Nuclear Proliferation. He tweets @navidhassibi. The views expressed here are his own.