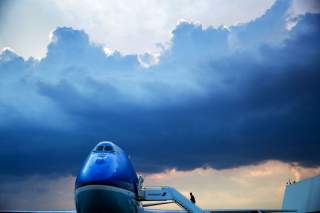 It's remarkable that the US economy looks to be picking up steam even as rising stars like China, India, Turkey, and Brazil wrestle with slowing growth and the risk of unrest. Improving US fundamentals, a steadily recovering jobs market, and revolution in energy production remind us that Americans aren’t waiting on Washington to kickstart growth. Yet, even as America strengthens at home, its influence abroad continues to wane.

The American public doesn’t seem to mind. A Pew Research poll conducted in December 2013 found that, for the first time in the fifty years Pew has asked this question, a majority of US respondents said the US “should mind its own business internationally and let other countries get along the best they can on their own.” Just 38 percent disagreed. That’s a double-digit shift from the historical norm. A full 80 percent agree that the United States should "not think so much in international terms but concentrate more on our own national problems." In a democracy, no president can sustain a costly and ambitious foreign policy without public support. In America today, that support just isn’t there.

US influence abroad is also diminished by a substantial shift in recent years in the global balance of power. China, Russia, India, Brazil, Turkey, the Gulf Arab states and others don’t have the muscle to change the global status quo on their own, but as Russia’s intervention in Ukraine reminds us, they remain the most powerful actors in their immediate neighborhoods and have more than enough economic and diplomatic leverage to obstruct US plans. Aware that Obama is focused on domestic goals and that a war-weary US public will not support costs and risks that don’t directly threaten US national security, it doesn’t take much for outsiders to discourage US intervention in Syria, Crimea or the East China Sea.

The energy revolution plays a role, as well. Thanks to new technologies and drilling techniques, the US Energy Information Agency forecasts that by the end of this decade half the crude oil America consumes will be produced at home. More than 80 percent will come from the Western hemisphere. With that in mind, it’s tougher for any US president to explain why Washington should be more deeply involved in the Middle East’s problems.

Unfortunately, the US government has undermined its own ability to persuade allies to help with the international heavy lifting. The wars in Iraq and Afghanistan, Guantanamo, and drone strikes inside other countries have made it harder for foreign leaders to persuade voters they should still support US policy. The US National Security Agency has made matters worse. It’s bad enough that NSA espionage undermines Obama’s ability to criticize autocrats for spying on their citizens. It’s much worse when the US president must explain to the presidents of Germany and Brazil why Americans are reading their email or listening to their phone calls.

Washington’s political food-fights undermine US foreign policy, as well. If there is any issue on which today’s Republicans and Democrats should agree, it’s trade. Republicans should be on board because they are traditional champions of international commerce. Democrats should support Obama’s trade agenda because party control of the White House gives Democrats the most influence in writing the rules of any new agreement.

Add the fact that the Trans-Pacific Partnership (TPP), an agreement that would open markets on both sides of the Pacific as part of one of the largest trade deals in history, is also a core component of US security policy. To finalize the agreement, the president needs “trade promotion authority,” a power that reassures US negotiating partners by empowering the president to submit a final deal to Congress for a simple up or down vote. Without this power, individual lawmakers can demand revisions that change the rules that other governments have already accepted—delaying, and perhaps killing, the deal. With midterm elections looming in November, however, even trade-friendly Republicans who support TPP will take a pass on granting Barack Obama any new form of “authority,” and Democrats are playing to a base that believes trade is a job-killer. As a result, Obama won’t push for this power until after November.

US foreign-policy reticence leaves outsiders to wonder which of its traditional commitments Washington will continue to accept. America’s closest allies have little cause for concern. Some in Israel want Obama to follow through on threats to pummel Bashar al Assad’s government in Syria and prefer airstrikes on Iran to a deal over its nuclear program. But Israel need not worry that this or any US president will renounce Washington’s commitment to Israel’s security. Nor should Japan fear that the US will begin to favor better relations with Beijing over ties with Tokyo. And even if Britain decides one day to leave the European Union, the historical and cultural ties that bind Britain and America will remain strong.

“Second-tier” allies—countries like Saudi Arabia, Turkey and Germany—have much more cause for concern. The Saudis are right to wonder what better US relations with Iran will mean for their interests in the Middle East—and how Washington would respond if a democratic uprising in that country threatened the Saud family’s political control. Sharp US criticism of Turkish prime minister Recep Tayyip Erdogan and his increasingly authoritarian domestic political agenda leaves another key regional ally unsure of US backing. Germany’s Chancellor Merkel, already understandably annoyed by US spying, will not always see to eye with Washington on Russia and how best to limit the damage it inflicts on Ukraine.

But the region where concern is greatest is East and Southeast Asia, where some of China’s nervous neighbors want a reliable American presence. Countries like Indonesia, the Philippines, Vietnam and others hope to deepen their commercial relations with China without becoming dependent on its good will. To do this, they want to broaden and deepen security relations with the United States, which has promised a “pivot” to Asia to help maintain the region’s stable balance of power.

However reluctant US policymakers might be to accept new responsibilities in the Middle East or to tangle with Russia over Ukraine, it is in Asia where Washington must deeply engage. That’s because rising powerhouse China, established power Japan, dynamic emerging market South Korea, and potential star Indonesia make this region more important than any other for the strength and resilience of the global economy over the next generation. It’s also because there is no Asian Union or other regional security forum that is capable of managing competition among these states and the frictions it already generates. No region is more likely to send the global economy—and, therefore, the US economy—off the rails than this one. Add the North Korean wildcard, and the need for a stabilizing outside power is only more obvious.

In late April, Obama will pay an overdue visit to Japan, South Korea, the Philippines and Malaysia. The US president and his hosts will have much to discuss. As always, however, it is not what the president says, but what he does, that counts. If only in Asia, that means offering a predictable partnership that reinforces confidence in American staying power—for friends and foes alike.