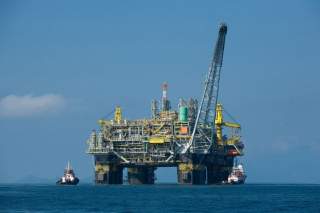 In this turmoil, technical factors have brought prices below the $60 benchmark associated with underlying supply and demand. A part of this is simply market momentum. When the prices of any asset make as sudden a move as oil has, traders tend to place buy and sell orders to position themselves for a continuation of the trend, and these alone can actually extend the trend, at least for a time. The low prices have also had an economically perverse effect on production. Instead of inducing production cuts, as the textbooks say they should, Iran and Russia in particular have done the reverse. It seems they are so dependent on oil sales for income that they have stepped up production to make up for lower prices. Their behavior stands to reason. Some 80 percent of Russia’s export revenue comes from oil, and the Kremlin depends on oil for 50 percent of its revenues. Figures on Iran are not substantively different. Very little current data exists on their actions, but oil traders provide considerable anecdotal support that these countries have increased sales. Meanwhile, Saudi Arabia, eager to increase the economic pressure on Iran especially, refuses to cut back on its production, as it might have done to stabilize prices in the past. The subsequent oil glut has increased inventories and created acute, immediate, additional downward price pressure.

This kind of movement can carry on for a while, and might even push prices down further. Eventually, the market will clear its excesses and, in the absence of some shock, return prices to the $60 level that reflects underlying supply and demand. But this tidy calculation comes with a warning. It can happen only in the absence of shocks, and shocks, in fact, are likely. The recent dissipation in geopolitical anxieties is far from durable. Neither Russia, nor the Persian Gulf are predictable or reliable places. Putin is a desperate man. Spillovers from Syria’s wars, gains by ISIS, renewed animosity between Iran and the West and a long list of less-definable troubling events in the Middle East could easily raise anxieties again and force oil markets to reimpose a significant risk premium on prices. Today’s new low price is far from secure, much less a new normal, as some have suggested. Any number of headlines could drive prices back above $100 a barrel very quickly, even more rapidly than they have fallen.