The True Consequences of America's Withdrawal from the Iran Deal 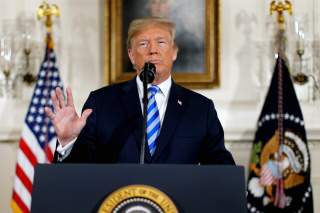 On Tuesday, President Donald Trump announced that he was withdrawing the United States from the Joint Comprehensive Plan of Action (JCPOA), more commonly known as the “Iran Deal.” Now, we must see if this international agreement to prevent Tehran from obtaining a nuclear weapon can survive without the backing of the United States of America—and what consequences will unfold from the President’s decision.

The Iran Deal has long been a target for President Trump, who relishes in disassembling every piece of his predecessor’s legacy. And while the decision to withdraw in such a flagrant manner—by reimplementing the nuclear sanctions in place before the start of the agreement—may have been egged on by some of his more hawkish advisors, it is critical to recall that the president is largely following through on a campaign promise to shred the deal. After all, he has little knowledge of the substantive critiques that more thoughtful commentators have offered, instead offering up the same tired talking points and debunked myths as justification for his belief that it is the “worst deal ever negotiated.”

But regardless of the fact that President Trump is playing to a domestic audience at home, his action will have consequences the world over.

While Israel is strongly supportive of President Trump’s decision, the same cannot be said for the United Kingdom, France and Germany. These other parties to the JCPOA have already signaled their intent to continue abiding by its terms, which could present two problems. First, as long as the other nations of the world agree to not place additional sanctions on Tehran in exchange for its continued compliance, whatever unilateral measures the Trump administration applies will be isolated and ineffective. More alarmingly though, if the Trump administration carries through with the threat to sanction anyone doing business with Iran, then European companies—or our allies themselves—could be caught in the crossfire. The overall effect is another blow to the transatlantic relationship, and corresponding additional boost for Vladimir Putin’s Russia.

Effects of abandoning the deal will reverberate outside of Europe, however. As President Trump was speaking, he revealed that Secretary of State Mike Pompeo was landing in North Korea in a matter of hours, and seemed to suggest that the withdrawal would communicate his personal strength of conviction to Pyongyang. It is unclear, however, that Kim Jong-un will interpret the message that way; he could instead see a United States that is unwilling to abide by its diplomatic agreements across administrations, or one that is willing to invent claims of an adversary’s noncompliance or move the goalposts at will. North Korea’s own history with international nuclear agreements is both fraught and entirely different than that of Iran, but at the very least all observers should be able to agree that the last thing needed on the eve of fragile denuclearization negotiations is a sudden dose of uncertainty.

And finally, there is the question of Iran itself—namely, how the consequences of President Trump’s choice will play out in the medium to longer term there. At face value, it is shameful that the United States was the bad faith actor in an agreement with Iran. But what happens next? For now, our European allies and Iran are each abiding by the terms. But should Tehran argue that U.S. sanctions—which are, after all, a serious violation of the agreement—are strangling investment in Iran, then it could drop out of the agreement all together and still claim that the United States is to blame. What remains of the sanctions regime collapsing would then be the least of our worries, considering that Iran would have no limits on and no inspectors watching its nuclear program. That is the development that could set us on the course for another bloody conflict in the name of nonproliferation in the Middle East.

Some of President Trump’s closest advisors—from National Security Advisor John Bolton to Arkansas Sen. Tom Cotton—have argued that conflict will be easy to win. They are wrong. First, Iran is a much more populous, advanced and wealthy nation than Iraq. No amount of “tough” posturing would cow it into easy defeat, and even if President Trump were to initially pursue a telegenic war from afar (missile strikes and sorties over a ground invasion), the potential for escalation is serious given Iran’s ability to retaliate asymmetrically against American troops, allies, and economic interests in the region. The problem also remains that there is no way to bomb away a country’s understanding of basic nuclear science. Above all else, the toll of a war with Iran would be devastating, and the effect would ripple across generations as young Americans and Iranians developed a new animosity for one another.

Thankfully, a war with Iran will not come tomorrow; hopefully, it will not come at all. Regardless, it is critical to point out that all of this uncertainty was entirely unnecessary. Iran remains in compliance with the agreement’s terms, per the assessments of the nuclear watchdogs at the International Atomic Energy Agency as well as our own military and intelligence leaders. In other words, the president’s decision was entirely an unforced error, driven only by his loathing of his predecessor and the wishes of his political base—and provoked with no concern for the fact that we are already in the midst of a nuclear crisis with North Korea.

The full consequences of President Trump’s withdrawal remain to be seen. What we know now, however, is that American leadership on the world stage is weaker than it was before—and yet our citizens at home and interests abroad are no safer in exchange. The United States, once a leader in using tough, smart diplomacy to stave off conflict, is left hollering impotently on the sidelines as the other nations of the world move forward without it. And that kind of damage will continue to reverberate long after President Trump leaves office.

Michael Breen is the president and CEO of Truman National Security Project and a former U.S. Army officer.