The Trump–Kim Jong Un Summit: Should It Be Postponed? 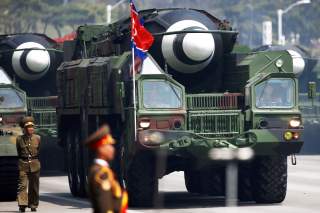 The summit between U.S. President Donald Trump and North Korean supreme leader Kim Jong-un is scheduled to begin in just three weeks. Yet there is growing confusion and uncertainty about the shape of the summit, the topics to be discussed, the meaning of ‘denuclearization’ and even whether it will take place. Reporting on the run-up to the summit is unnerving, depicting chaos in the Trump administration—including a startlingly late realization that the North Koreans have no intention of denuclearizing.

Increasingly, it looks as if South Korean President Moon oversold the prospect of a North Korean summit to Trump. Ever susceptible to flattery and not actually doing any real preparation himself, Trump fell for the off-hand comment about a Nobel peace prize. Media coverage that actually took the idea that Trump might deserve a Nobel seriously fueled sky-high expectations. These are now coming down to earth amid a wave of North Korean backtracking.

This week’s North Korean outbursts have thrown the summit into doubt. With just three weeks to go, far too much is uncertain. The possibility of disaster, while low, is far higher than in a normal; and the stake are far too high for such risks. The wise thing to do now would be to either postpone this until proper staff work can hammer out some minimal consensus, or have the summit but at a lower level. There is growing expert commentary to suggest this track, mostly out of anxiety that this is all too rushed and thrown together, which creates far more room than is wise for misperception, mistakes, gaffes and so on.

As I have argued before in the National Interest, cancelling or delaying the summit would be prudent, mostly because of anxiety that Trump himself is not ready for this. I continue to be worried that the president’s ‘unique’ character makes this summit far riskier than a normal meeting of this kind. If Trump walks out, for example, as he has threatened, or if he uses profanity or racial insult, the summit could make things worse. That Trump has admitted that he is not preparing for the summit and does not feel he needs to is even more unnerving. Trump knows little about Korea, nuclear weapons, missile technology or U.S. force deployments in East Asia. This creates the possibility that Trump may trade away something valuable without knowing what he has done, much as he regrettably gave a summit meeting to the North Koreans for nothing—a huge missed opportunity to extract a concession from Pyongyang.

At this point though, it is probably too late to cancel. The summit may still fall through of its own accord. But were the White House to cancel unilaterally, or were either Korean party to start suggesting that, it would likely be read as a major snub by the other two parties. The cancellation itself, at this late date, would send unnerving signals. It might not be wise at this point.

But it still might be possible to postpone it, or re-tool it to be a meeting of high officials from the U.S. cabinet and North Korean State Affairs Commission. The latter would be so anti-climactic after this fetid détente season that I am doubtful it could happen. The global media would not cover it nearly so much, and that is a central personal incentive for both leaders. Both Kim and Trump desperately want this—Trump for the great television and to change the subject back home, and Kim for the legitimation of meeting a U.S. president as equals before the global media.

But a postponement might work. A diplomatic excuse to save face all around could easily be found—Kim Jong-un’s plane might not even be able to make it to Singapore (seriously), for example. Or perhaps both sides could simply be honest and say that they are not ready and need more time to prepare. And that—preparation, staff-work—is ultimately the issue.

Summits normally come at the end of a long chain of diplomacy and staff-work to narrow the differences between countries enough for leaders to make the final leap. When Richard Nixon met Mao Zedong, or when Ronald Reagan met Mikhail Gorbachev, far more work and planning went into those events. Trump accepted the North Korean offer, via South Korean envoys, just five weeks ago. Nine weeks is simply not enough time to reduce the enormous ideological and strategic cleavages between the Washington and Pyongyang. Years of effort went into previous engagements between the United States and North Korea—the Agreed Framework of the 1990s and the Six Party Talks of the 2000s—and these still fell apart. That Trump insisted on moving so fast to a summit with Kim was always a fraught choice.

But there is no obvious reason for the rush, no obvious reason for convening a high-stakes summit with so little preparation. Deterrence on the Korean peninsula is stable. War is not about to break out (unless Trump starts one), nor are the North Koreans going to strike the United States out of the blue. They are not suicidal.

So slow this whole thing down. Do it right. Let the engineers, mil-tech folks and diplomats work out the terms and the sequencing of moves. There is no rush.