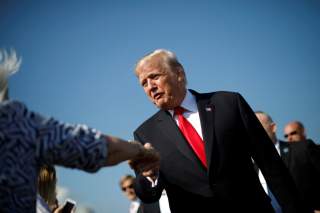 The increasing strength and assertiveness of the People’s Republic of China has been met with calls for the United States to develop weapons, strategies and policies to counter the PRC’s rise. Whether discussing military tactics and strategy, economic policy, or diplomacy, the narrative in the United States is one of reaction and countering a powerful and leading PRC. By focusing on opposing the PRC, the United States has inadvertently become a second-handed actor, driven not by its own values and interests, but by those to which it is reacting. In doing so, the objectives and conduct of U.S. policy have become dependent on the policy and actions of an adversarial power and wanting of a self-interested pursuit of U.S. interests. The United States must break free of this intellectual dependence on the PRC and begin taking actions based on U.S. values, directed at U.S. interests, and guided by a strategy specifically crafted to shape the environment to match the U.S. vision of the future.

The current second-handed orientation of the U.S. policy community is most starkly displayed in discussion of military tactics, operations and strategy. Over the past decade, analysts have written incessantly about countering a range of PRC weapon systems—collectively branded by the U.S. security establishment as Anti-Access, Area Denial (A2AD). This concept integrates improved PRC capabilities in long-range air defense, coastal defense cruise missiles, and the DongFeng-21-D anti-ship ballistic missile to paint a picture of concentric rings of PRC invulnerability that the United States must reduce before its own strategy can even be considered.

The A2AD orientation has led the U.S. security establishment to an intellectual preoccupation with weapon systems and countermeasures. Many U.S. analysts are laser-focused on defeating PRC weapons rather than on developing a strategy to protect U.S. interests. Not only are U.S. interests not the focus, even PRC interests are increasingly ignored in a rush to defeat weapon systems. As it searches for the defense concept of the future, the United States has replaced its own interests with pieces of PRC hardware as the standard by which success is judged.

For strategists who see beyond upgraded PRC coastal defenses, the tendency is still to address PRC strategy, rather than devise one for the United States. For example, PRC actions in the South China Sea are often the starting point of U.S. strategy discussions. This tendency grants the PRC centrality in regional security discussions and creates a de facto concession to PRC interests and view of the status quo. The U.S. position becomes second-handed and defined in terms of PRC values, interests and actions, rather than by a self-interested declaration of values, objectives or interests of the United States.

U.S. economic policy has also been second-handed, focusing on the influence the PRC economy has over the United States or the impact PRC economic initiatives on regional architectures. Even initiatives the United States participates in, such as the Trans-Pacific Partnership (TPP), are couched in terms of their effectiveness vis-à-vis a PRC. It is little wonder the TPP could not garner support when the dominant narrative was not for anything—market access, cheaper goods, or more freedom for U.S. economic actors—rather it was against other trading blocs and foreign-labor standards. U.S. goals were once again second-handed rejections of the ideas of others.

These issues share a focus on what the PRC is doing and what their interests might be. Any discussion of what U.S. interests are or how their achievement might be aided is demoted to a secondary concern. Instead, commentary focuses on what the United States can do to counter or challenge PRC strategy, diplomacy and military advances. As a result, the description of the strategic environment and proposed solutions are second-handed. That is, both the understanding of the environment and proposed solutions are derived from the statements and actions of an adversarial power, rather than from the interests of the United States. The danger here is that in defining success in terms of the capabilities and interests of another power, their interests become the standard of value and U.S. interests become irrelevant.

If strategy and policy are formed in reaction to PRC interests, the United States will not only cede strategic, operational and tactical initiative; more ominously, it will cede its decisionmaking to the PRC. Of course, the United States will nominally make its own decisions, but by determining policy in reaction to another, it effectively allows the other power to define the operating environment and terms of debate. In doing so, the United States cedes cognitive control of a foundational part of the decisionmaking process to the adversary. Once an adversary’s interests are accepted as the starting point of one’s own deliberations, any relationship between the chosen course of action and one’s own interests becomes purely coincidental.

This is not to say that the values, interests and actions of the PRC are not relevant to security in the Indo-Asia Pacific. Rather they must be placed in proper context for U.S. policy, as defined by the values and interests of the United States. Only once those are properly understood, can strategy be designed to gain and maintain them. The efficacy of U.S. ways and means in accomplishing those ends will naturally be affected by the PRC’s values and interests, as well as the ways and means it employs to achieve them. However, those are only relevant to U.S. strategy after it has been properly framed in terms of U.S. interests.

Undoubtedly, commentators will insist the United States is pursuing its own interests. Some will argue PRC weapon systems are threatening enough that talk of U.S. strategy without first addressing them is folly. However, one does not know if tackling them is even required until a regional strategy and supporting military strategy is developed. If the United States must address them, then the manner used to overcome them will be dependent on the strategy their reduction is intended to support. These important, self-interested, considerations are lost if the reason for action never gets beyond the weapons systems.

Others will argue that expansion of PRC economic and military power is itself a threat to U.S. leadership and interests; therefore, it is proper to focus on containing it. However, containment itself is second-handed. Once again, it places the opponent’s actions at the peak of the U.S. value hierarchy. Consider Cold War events the United States felt pushed into because of the containment strategy. For example, a dispassionate analysis of U.S. interests would not have suggested propping up the Republic of Vietnam in 1965. However, despite statements—and conviction of the security policy establishment—to the contrary, the United States was not acting to maintain its own interests, it was allowing its policy to be shaped by a strategy of containing Soviet Russia to stop them from pursuing their interests. As a result, the United States spent much of the Cold War in avoidable conflicts of questionable value because, through a containment strategy that was inherently reactive, it allowed the adversary to shape and influence U.S. policy and actions.

Some will argue relations with the PRC must be cooperative and that this is an expression of U.S. values. Moreover, it will be noted that PRC interests and values must be acknowledged to effectively engage them in the international system. While a cooperative relationship is advantageous to the United States in the long-run, cooperation must occur towards an end. If the ends being discussed are determined by the PRC while the United States pursues cooperation for the sake of cooperation, the ends that will be achieved are the PRC’s. Cooperation is conducted on the basis of shared interests and values, but if the United States has no strategy or policy beyond cooperating with the PRC, the starting point for discussion will necessarily be how the PRC sees the world, the U.S. approach will remain second-handed, and U.S. interests will be an afterthought.

If the United States is to succeed in the pursuit of its interests, it must not act as an adjunct to the PRC. Words and deeds that oppose economic initiatives, react to island-building, and counter weapon systems reinforce PRC narratives and their desired role of regional hegemon. Not only do these inadvertently aid the PRC’s strategy, focusing on countering the PRC is no substitute for the self-interested evaluation and thinking required to advance U.S. interests.