Is the Trump Administration Sinking into a Yemen Quagmire? 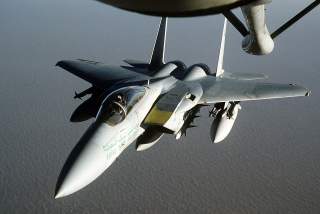 When President Donald Trump tapped former Gen. James Mattis to be his secretary of defense, I had the same feeling as so many other people inside and outside of Washington, DC: relief. Finally, there would be an adult in the room who knew how to navigate the treacherous national-security bureaucracy and someone who had actually dealt with foreign military and political leaders as a representative of the United States—unlike many on the White House staff.

But even good picks like Mattis can be too quick on the trigger and too prone to action without considering the second, third and fourth-tier impacts. Secretary Mattis and the Trump administration are in the process of potentially making a horrendous mistake of epic proportions in Yemen.

Trump officials are debating whether or not to increase U.S. military assistance to the Saudi-led coalition fighting the Houthi rebellion in Yemen. Per the Washington Post, Secretary Mattis sent a memo to National Security Adviser H.R. McMaster making the case for additional U.S. intelligence support for a UAE-backed operation to reclaim the Yemeni port of Hodeida. This recommendation comes on top of a decision that Secretary of State Rex Tillerson made several weeks ago to resume U.S. arms shipments to the Royal Saudi Air Force, which has been performing bombing runs over Yemen for the past two years. The National Security Council is reportedly scheduled to discuss Mattis’s memo this week.

The principals—and ultimately the president—should put the memo in the shredder.

Yemen Is Already a Humanitarian Catastrophe

In the words of Stephen O’Brien, the UN’s undersecretary general for humanitarian affairs, Yemen is “the largest humanitarian crisis in the world and the Yemeni people now face the spectre of famine.” Even to members of the humanitarian community, who are used to witnessing all manner of brutality and deprivation on a daily basis, the numbers are absolutely staggering. There are 18.8 million people—more than 80 percent of Yemen’s entire population—in need of humanitarian assistance, with 10.3 million in acute need. Three million are internally displaced; two million children are out of school; 462,000 children under the age of five suffer from acute malnutrition; and the war has prevented food, medicine and fuel from being imported into the country and being distributed to where it needs to go.

More intelligence support and arms sales to the Saudi coalition, it goes without saying, will inevitably make the humanitarian situation on the ground even worse and the delays that aid workers are dealing with downright kill morale. The war will go on, more civilians will die and the combatants will continue to believe that the war can be won on the battlefield—making compromise at the negotiating table less appealing.

The civil war in Yemen isn’t a top-tier priority for policymakers in Washington, but when it is discussed in the public domain, U.S. officials often repeat the mantra that there is no military solution to the conflict. The State Department talking points are repetitive, but ultimately correct: only a Yemeni-led peace process among all of the country’s belligerents and stakeholders will end the conflict and allow Yemenis and the international community to begin the expensive process of rebuilding the country’s infrastructure. During his last months in office, Secretary of State John Kerry flew to the region and met with Arab leaders on multiple occasions, ultimately coming to the same exact conclusions: that the war is at a military stalemate; no combatant is strong enough to vanquish their enemies without completely destroying Yemen as a nation; and the most durable way to resolve Yemen’s many political problems is by striking a fair political agreement that ushers in a new era of Yemeni politics.

If the U.S. does indeed decide to plunge further into the conflict and assist the Saudis and Emiratis in their campaign, Washington is effectively deepening its role as a belligerent to the advantage of one side in an internal conflict. In other words, at the same time that the United States would be trying to work with the UN to resurrect a dormant Yemeni peace process that is hanging on by a thread, Washington would be sending thousands of smart bombs to Riyadh and improving the intelligence picture for Saudi and Emirati aircraft searching for Houthi targets. The two are completely contradictory; the United States would be dousing a burning house with water on one day, only to light a match the next.

War Crimes Are Occurring on a Weekly Basis

If the Saudis were taking their responsibilities under international law seriously and investigating in an impartial manner civilian deaths resulting from their operations, proponents of more arms sales to Riyadh would be able to make a better case. But the Saudis aren’t even doing that; the investigative commission that the Arab coalition has established to look into civilian deaths has been laughable, to put it generously. The coalition has only probed fourteen incidents that have occurred over the last two years of hostilities. And of those fourteen cases, the coalition has absolved themselves of blame in ten incidents. Human Rights Watch, Amnesty International and the UN High Commissioner for Human Rights aren’t buying the results, and neither should the United States. Indeed, Washington shouldn’t have anything to do with a military operation that has been run so poorly as to be downright criminal in its conduct.

The Trump administration’s rationale for getting itself deeper into the Yemen quagmire appears to be more about Iran rather than anything having to do with Yemen. That’s not a good enough justification for ordering the U.S. military to effectively participate in a war that hasn’t been fully debated—let alone authorized—by Congress.