The Trump-Kim Summit Is No Game Changer 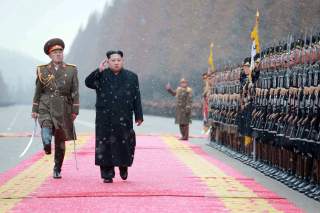 During the past year the long-running conflict between the United States and North Korea seemed to be lurching toward catastrophe. Whether to actually defend his nation or to extort external assistance, North Korean dictator Kim Jong-un continued testing nuclear weapons and ballistic missiles. To Americans the missiles were particularly threatening since they could give North Korea the capability to strike the continental United States. In response, the president made clear that he would not allow Pyongyang to field nuclear-tipped intercontinental missiles, demanded that North Korea end its nuclear weapons program, and hinted at U.S. military action if this was not done.

Then there was a tiny glimmer of hope in this escalating crisis. In a recent meeting with South Korean envoys Kim Jong-un indicated for the first time that he was willing to consider denuclearization if, in his words, the military threat to his country was eliminated and its security guaranteed. A few days later the North Korean leader asked for direct talks with President Trump—and Trump agreed.

A meeting between Kim and Trump may or may not happen. Summits normally cap off agreements hammered out in advance through extensive negotiations by diplomats and subject-matter experts. That hasn’t happened in this case. In fact, Secretary of State Rex Tillerson, who was traveling in Africa when Trump accepted Kim’s request for a meeting, did not seem to be aware that the announcement was coming. Yet even if Kim and Trump do meet, it is unlikely to produce results. Both sides have vital national interests at stake and have cared out diametric positions. More importantly the United States lacks the leverage to address that compelling North Korean concessions or compromise.

Leverage is the lifeblood of statecraft but it can be devilishly difficult to accumulate and apply, particularly against a skilled adversary. Over the past few decades, the United States has tried both sticks and carrots with North Korea, combining multinational economic sanctions, diplomatic isolation, threats of military action, offers to ease or remove sanctions, and the provision of economic assistance. None of these sticks or carrots have worked. Everything the United States has tried or threatened has proven ineffective or been not credible.

Take sanctions. Given the economic-centric American strategic culture and worldview, sanctions have been an important element of U.S. statecraft for a very long time, stretching back to the pre-World War II embargo key exports to Japan. That, of course, led to war. At other times, though, they have compelled greater flexibility in negotiations for instance, Serbia under Slobodan Milosevic and the apartheid government of South Africa.

But sanctions have not and cannot force Kim Jong-un to abandon his nuclear weapons and ballistic-missile programs. His regime may not be totally immune to economic pressure, but is close to it. Whether through the export of raw materials and some manufactured goods, crime, or remittances from North Koreans working abroad, there seems to be enough cash flowing in to keep the North Korean elite happy. If anything, it has more access to goods and services than it did during North Korea’s economic crisis of the 1990s. Most non-elite North Koreans rely on the informal economy. They produce much of their own food or get it from small-scale entrepreneurs, and they have access to goods brought in from China. While far from prosperous, they are getting by.

In general sanctions work when they cause a declining standard of living among groups that a regime relies on for support or fears. In North Korea the elite seems committed to the regime and most of the people are accustomed to having very little. And as the United States learned in its conflict with Saddam Hussein, it’s nearly impossible to make sanctions hurt only the elite of a nation without devastating the non-elite. On top of of this, China has no interest in economically isolating North Korea and seeing the Kim regime collapse. For Beijing, this would be more dangerous than North Korean nuclear-tipped missiles pointing at the United States.

While sanctions are ineffective against a regime that can count on elite support and does not fear its non-elite public, America’s other primary source of leverage against North Korea—military force—is not threatening enough or credible. Kim could tolerate limited U.S. strikes on North Korea. If anything they would help quell any domestic dissent and increase Chinese support. People naturally back their government when facing an external threat. And since U.S. attacks on North Korea would clearly constitute aggression under international law, Washington rather than Pyongyang would be seen as the aggressor, thus undercutting America’s global leadership and weakening support for the multinational sanctions regime against North Korea. Kim knows this.

Threatening a full-scale invasion of North Korea is even less credible. South Korea, which would suffer horribly in a major war, would never allow it, yet the United States couldn’t undertake major military operations in North Korea without South Korea’s assistance. A full scale invasion would have cascading effects across Asia and throughout the world, probably sending the global economy into a tailspin—the last thing President Trump wants leading up to a possible reelection bid. And a U.S. invasion of North Korea provoked only by Pyongyang’s deployment of nuclear missiles would make America the aggressor and destroy U.S. leadership everywhere. Again, Kim Jong-un knows this. Even though the United States could overthrow him, he believes—correctly at this point—that will not happen. Hence the United States has the military capability for regime change via invasion but threatening to do so is not be credible.

What, then, might the United States do or threaten to do that Kim Jong-un truly fears? The one thing that meets all of these conditions is to fueling domestic opposition to his regime.

North Korea has been the world’s most tightly closed society for years and has a massive domestic-security force ranging from local government agents who watch a few families to national secret police and a web of political prison camps. Dissent is punished, often fiercely. Given this, it is hard to know exactly how extensive opposition to the regime is or how deep it runs. But it is hard to imagine that it is not there, even if unorganized at this point. Kim must know this. Most likely nothing frightens him as much as the prospect of a “North Korean Spring.” The United States could stoke this fear by expanding its ability to support domestic opposition and preparing to use it.

For starters, President Trump could order a major expansion of the U.S. military’s unconventional warfare assets. According to U.S. law, unconventional warfare consists of “activities conducted to enable a resistance movement or insurgency to coerce, disrupt, or overthrow a government or occupying power by operating through or with an underground, auxiliary, or guerrilla force in a denied area.” The U.S. government has the ability to do this.

To increase American leverage over North Korea, the United States should plus up the unconventional-warfare assets that might help organize domestic opposition to the Kim regime and conduct well-publicized North Korea-focused wargames and exercises. Unconventional warfare in North Korea would be extraordinarily dangerous. Hopefully it will never be necessary. But the best way to make sure that the United States doesn’t have to do it is by being prepared to do it, and making sure Kim understands that.

A second step might be to significantly increase psychological operations against North Korea, particularly ones that might stoke dissent among the non-elite. As much as the North Korean regime tries to control the information its people receive and shape public thinking through incessant propaganda, there is much that the United States could do to undercut the regime’s narrative and demonstrate the massive improvement in the life of most North Koreans when the Kim regime is gone.

Finally, the United States could set the political conditions for undertaking actions that might stoke domestic opposition to the Kim regime. A bipartisan congressional resolution authorizing the president to take such steps—if he deems it necessary—would send a powerful message to Kim Jong-un, make the threat credible, and augment American leverage in whatever sort of negotiations come about. Put simply, for the United States to succeed, Kim Jong-un must fear his people.

Today Kim Jong-un has the strategic initiative in his conflict with the United States. He acts and America reacts. He decides when to turn up the heat and when to turn it down. If the United States had more leverage, it could seize the strategic initiative and control the course of the conflict, hopefully pushing it toward a resolution that addressed American national interests at an acceptable cost.

A Kim-Trump summit might have some value, but alone it is not a game changer. However skilled a negotiator President Trump is, he is not going to talk Kim Jong-un into abandoning what he considers his nation’s vital interests without more leverage. The first step for success, then, is to expand America’s leverage.

Steven Metz is director of research at the U.S. Army War College Strategic Studies Institute and writes a weekly column on defense and military issues for World Politics Review.