The Trump Tax Plan Has Failed the Average American 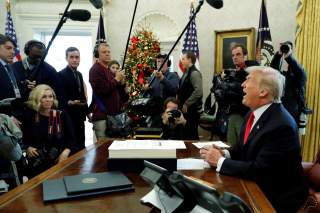 Did the self-proclaimed “great dealmaker” make a great deal when it came to structuring tax reform? During the presidential campaign, candidate Trump trumpeted his “tremendous” dealmaking skills. To assess how those played out in the recent tax reform negotiations, it’s useful to recall what actually constitutes a good transaction.

In business, deals fall into three categories: lose-lose, win-lose and win-win. Lose-lose deals never knowingly occur. Why would both sides agree to terms under which neither side benefits? In contrast, win-lose deals happen all the time. One example: a takeover in which the pursuer has the money or clout to force the pursued into capitulation. But the best deals, the “great” ones, are win-win deals in which both sides get something they want.

So far in his presidency, Donald Trump has championed two major deals: replacing Obamacare and revising the tax code. We can’t assess his dealmaking acumen based on the various Obamacare replacement bills, because he had virtually no involvement in them. Instead, the president allowed Congress to work out the details. That failure to provide leadership led to a Republican caucus that flailed, sputtered and ultimately gave up.

But the tax bill was a different matter. Trump learned from the Obamacare debacle, and when it came time to negotiate tax code revisions, he was fully engaged. The president clearly and specifically laid out his goals, the most urgent being a corporate tax rate reduction from 35 percent to 20 percent. Republicans on the Hill welcomed Trump’s leadership, delivering him a bill that fully bears his imprint.

But is it a “great” deal? Is it win-win? Trump says it is. Corporations obviously benefit from a huge tax reduction. Meanwhile the middle class, though receiving a smaller and temporary tax cut, benefit from companies spending more on jobs and higher salaries. Further, Trump claims, the American economy benefits from growth-spurring corporate investment in areas such as jobs and manufacturing infrastructure.

The problem is that while the first assertion is unquestionably true—the law’s corporate tax reductions are explicit and permanent—the rest is mere wishful thinking. Worse, it’s wishful thinking in the face of evidence pointing in the opposite direction. Previous examples at both the federal and state levels illustrate what really happens when companies receive government windfalls. They stash cash (often overseas), increase shareholder dividends and buy back their own stock. Businesses pointedly did not increase wages, accelerate hiring, or up their investment in R&D. In short, corporations made sure the only winners were themselves; everyone else, including generations down the road, gets stuck paying for the corporate tax cuts while suffering the service reductions that are inevitable when governments are cash-strapped.

But surely our business-savvy president wouldn’t repeat the mistake of making a deal where one side (corporations) get something (tax cuts) while the other side (the American economy and the middle class) get nothing. Trump has frequently railed against such deals. From the Iran nuclear accord to NAFTA to the TPP, Trump has objected to deals where, in his view, America gets played for a patsy. He would never sign such a deal, he has declared.

And yet we now have a tax law in which the government gives businesses everything they want, exacting nothing in return. As a result, any middle class or general economic benefits are, at best, specious. Meanwhile, there is no question that an additional trillion and a half dollars of debt won’t do the economy any good.

The sad irony is that Trump, were he truly a great dealmaker, could easily have made this a win-win proposition. All he had to do was make explicit the benefits for both sides. For instance, rather than outright tax cuts, the plan could have been structured to give businesses tax incentives for behaving in ways that are known to stimulate growth. Companies could accrue tax credits for, say, hiring new employees, increasing non-executive wages, expanding employee education programs or investing in research and development. Companies unwilling to do those things wouldn’t get a no-strings-attached gift from the American people—nor should they.

With a little imagination, a truly great dealmaker in the White House could have transformed the Republican tax reform plan into a win-win proposition. Perhaps even some Democrats would have found favor in such a plan. Instead, this new law makes the same mistakes as its win-lose predecessors. By any definition, that’s not great, or even very good, dealmaking.

Alan Taffel is President of Taffel Communications, a Virginia-based consultancy. He is the former Chief Marketing Officer of MCI and Worldcom.