The Trump Trick: How to Make Iran Look Like It Is Complying with U.S. Demands 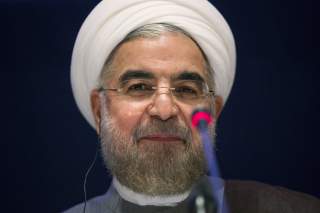 With President Trump’s decision last week to lay down a red line on the Joint Comprehensive Plan of Action (JCPOA) and at the same time slap more onerous nonnuclear sanctions on Iran, its clerical establishment has vowed a “severe response.” But while Tehran’s rhetoric has been threatening, its riposte is likely to be restrained due to three inconvenient realities: the Iranians need the JCPOA more than Washington; the United States has limited equities in Iran; and Iran is overextended in the region.

Iran Won’t Walk Away from the JCPOA

One of the leading arguments against the JCPOA concerned the sequencing of sanctions relief. Critics argued that it front-loaded sanctions relief at the expense of a more gradual relaxation commensurate with Iran fulfilling its obligations throughout the limited duration of the accord. Indeed President Rouhani himself raised immediate expectations and sold the JCPOA by saying the deal would trigger “economic mutation” and open “new windows for the development of economic relations with the world.” He further boasted that “thousands of letters of credit” had been opened on the first day of the accord’s implementation. Last month, the International Monetary Fund predicted real gross domestic product growth would expand by 4.2 percent in the 2017/2018 fiscal year and that “growth has begun to broaden to the non-oil sector”—a rebound after years of living under crushing multilateral nuclear sanctions. The Rouhani administration has also managed to tackle inflation. In 2013, when Rouhani took office, inflation was around 40 percent—leading Iran’s currency to be devalued by more than 450 percent—but the World Bank forecasts that inflation will remain below 12 percent over the next three years.

Yet, a stubborn reality has persisted: rampant unemployment. In October 2017, Iran’s interior minister warned that in some cities 60 percent of the workforce was unemployed. According to Iranian economist Saeed Laylaz, out of a country of over 80 million people “there are 35 million people under the poverty line and 3.2 million people who sleep hungry every night.” Coupled with rising food prices, this perfect storm pushed protesters concerned with kitchen table concerns took into the streets in Iranian cities with cries of “bread, jobs, freedom.”

It’s in this context that Iranians—regardless of President Trump’s threats—would be loath to walk away from a deal which has rescued its economy from the brink while at the same time producing a disappointed, disaffected and disgusted public. It would be akin to pouring gasoline on a fire. The JCPOA is providing a lifeline to the mullahcracy.

At the same time, if past is prologue, Tehran has a limited ability to exact reciprocal revenge on Washington in tit-for-tat sanctions battles. We saw this movie last year when Iran sanctioned fifteen U.S. companies. In announcing these measures, its foreign ministry noted that “[t]he sanctioned companies have, directly and/or indirectly, been involved in the brutal atrocities committed by the Zionist regime in the occupied Palestinian territories, or they have supported the regime’s terrorist activities and Israel’s development of Zionist settlements on the Palestinian soil.” The U.S. entities included Raytheon Co., ITT Corp. and United Technologies Corp. Penalties included asset seizures and forbidden contact with these businesses. Yet, as media reports indicated at the time, these corporations did not appear to have a presence in the Iranian market. What this episode demonstrated was Tehran’s inability to levy more than symbolic penalties against U.S. businesses.

Some observers will argue that Iran may opt to blacklist Boeing, a U.S. company with which it is has a pending $8 billion order for aircraft. But pursuing that avenue would be akin to Iran shooting itself in the foot, as these planes were promised to Iran under the terms of the JCPOA in order for it to modernize its dangerously outdated fleet.

The one arena where Washington faces risk is in its troop deployments across the Middle East—like in Iraq, Syria, Bahrain and Qatar. However, more aggressively targeting U.S. interests in the neighborhood will likely be deferred until the day the U.S. government decides to sanction the Islamic Revolutionary Guard Corps (IRGC) or its Quds Force as foreign-terrorist organizations. Senior Iranian lawmakers foreshadowed such a response when it sanctioned the fifteen U.S. companies last spring—Alaeddin Boroujerdi, the chair of the Iranian parliament’s national security and foreign-policy committee, said at the time that the legislature would consider a measure designating the U.S. military and the CIA as terrorist groups if Congress passed a pending piece of legislation designating the IRGC as such.

Lastly, Iran will be loath to rock the boat with an increased tempo in its usual regional meddling and support for terrorism. In addition to the economic concerns which drove the protests, resentment over spending on foreign adventurism could be found in the crowds of protesters with populist chants against regional adventurism of “Not Gaza, Not Lebanon, I give my life for Iran,” and the tearing down of posters of the supreme leader and Quds Force head Qasem Soleimani. Such an outcry was driven due to publication of a draft budget for the fiscal year beginning March 21, which included an increase in the IRGC’s budget to around $8 billion—accounting for almost two-thirds of the defense financial plan—all while subsidies for ordinary Iranians decreased.

In addition to this domestic pressure, the international community is increasingly seeking to contain Iran in the region. The German, British and French foreign ministers agreed with Iran last week to host an “intensive and very serious dialogue” on its ballistic missiles and regional machinations. The Financial Times reported on Monday that as a result of the Trump ultimatum, “European diplomats are now urgently seeking more information from White House officials to understand exactly what Mr. Trump wants and how they might be able to meet his demands by the president’s 120-day deadline.” Given this difficult environment and Iran’s desire to protect its burgeoning trade relationship with Europe, we’re unlikely to see any radical shifts in its regional posture in the near term.

Thus, Iran’s immediate response to this new international dynamic is likely to be underwhelming rather than overwhelming.

Jason M. Brodsky is the policy director of United Against Nuclear Iran (UANI). He is on Twitter at @JasonMBrodsky.

Image: Iran's President Hassan Rouhani gives a news conference on the sidelines of the 69th United Nations General Assembly at United Nations Headquarters in New York September 26, 2014. Rouhani said on Friday "courageous decisions" must be made to clinch a long-term nuclear agreement and that any deal without the lifting of all sanctions against Tehran was "unacceptable". REUTERS/Adrees Latif​