The Two Koreas to Talk on Thanksgiving: Should Americans Give Thanks? 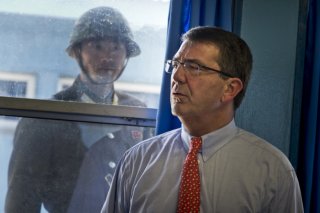 Whenever North Korea heads to the negotiating table one remembers the traditional description of a second marriage: the triumph of hope over experience. We’ve been here before. Or, more accurately, the two Koreas have. Many times.

Still, that’s not a criticism. As Winston Churchill famously said, “to jaw-jaw always is better than to war-war.” The last Korean conflict left millions of casualties and refugees. Even a minor-league war could be catastrophic.

Nevertheless, the Seoul should have no illusions about the negotiations scheduled for Panmunjom, the traditional international meeting point on the border, on November 26, America’s Thanksgiving. Nothing much is likely to emerge from that gathering. And nothing that emerges is likely to survive very long.

Diplomatic dialogue requires two parties. The Democratic People’s Republic of Korea (DPRK) always prefers a monologue. Kim Jong-un is most concerned about preserving his rule through what has evolved into a family dynasty, where the monarch wears a Leninist crown.

To the good, Kim evinces no suicidal impulses. And despite the regime’s consistent rhetoric about destroying enemies near and far, nothing suggests Pyongyang’s leadership actually believes the DPRK to be capable of defeating Seoul backed by America. When I visited North Korea years ago my interlocutors commented on how U.S. planes had reduced the capital to ruins during the Korean War. It would be even easier for America to do so now.

However, Kim suffers no liberal sentimentality. Over the last four years he, or at least his government, has executed some 400 officials, including his uncle, once seen as the regime number two. There are no soft landings in Pyongyang.

In any talks with the ROK humanitarian concerns will never be more than a gloss for the DPRK. The objective is never going to be far from extortion. Thus, Seoul’s objectives also should be eminently practical.

Take last August. The South restarted propaganda broadcasts along the demilitarized zone after two of its soldiers were injured by landmines. This triggered a surprisingly ferocious response from the North, with the Kim regime making more than its usual angry threats. Why the issue proved so sensitive is hard to say, but the two Koreas reached a deal in which Seoul unplugged the speakers and Pyongyang expressed its “regret.” The two also agreed in principle to further discussions to reduce tensions. The meeting on November 26 is supposed to help set such talks in motion. “The game’s afoot,” said Yonsei University’s John Delury.

So what does each side want? Pyongyang almost certainly hopes to persuade Seoul to restart economic aid and investment suspended in 2010 after the sinking of a South Korean warship and the bombardment of a South Korean island. While there’s nothing in principle wrong with Seoul attempting to buy good behavior, so far the DPRK never seems to stay bought.

For its part, Seoul must decide what it most desires out of Pyongyang. One goal should be continuing dialogue, even if the results are largely inconsequential and the process frustrating. North Korea dislikes making concessions, but it craves attention and respect. In general, it has proved less likely to provoke militarily while engaged diplomatically. So Seoul should push to institutionalize talks of some sort. One possibility might be to propose lodging a “special” if not quite official representative in each other’s capital.

A more substantive objective for South Korea should be to lessen the North’s conventional threat. North Korea’s military is unsophisticated, but its advanced positioning puts Seoul at risk. ROK aid and trade should only follow demonstrated goodwill from the DPRK, and that could be best shown by reducing the military threat to the South’s industrial, political and population heart.

To test Pyongyang’s interest, the government led by South Korean president Park Geun-hye should indicate that North Korean flexibility would open up topics heretofore off-limits. For instance, if North Korea reduces the security threat to South Korea, then Seoul would consider limiting or eliminating joint military exercises with the United States--and perhaps even America’s troop presence. But these would require a serious DPRK commitment to negotiations, significant confidence-building steps and a cessation of inflammatory provocations.

The United States should offer its full endorsement for the talks and indicate its readiness to step both forward diplomatically and back militarily if the two Koreas strike a deal. Indeed, overextended Washington should actively press for a more pacific peninsula. While little that Pyongyang says can be accepted at face value, even paranoids have enemies. America’s propensity for regime change likely unsettles the North. Reducing the threat environment facing the DPRK would offer a good test of the latter’s intentions. Is the Kim regime serious about economic development? If so, the South Korean and American offer would be attractive.

Moreover, Seoul should use the prospect of talks with the North to intensify its dialogue with China. Beijing appears to be increasingly unsettled over the misbegotten behavior of its erstwhile ally in Pyongyang. Nevertheless, the People’s Republic of China has resisted applying more pressure, instead urging the United States to engage the North and reduce the insecurities that Beijing presumes to underlie the North’s push for nuclear weapons. Following the Chinese script would allow Seoul to request an extra push from Beijing.

Continued North Korean intransigence would warrant additional discussions between Seoul and Beijing. What guarantees regarding security, nuclear weapons, security and economic concessions would be necessary to involve China more directly in resolving the “North Korea problem”? Washington should indicate its willingness to support any such effort.

All of this goes well beyond the working-level discussions planned for Thursday. While another desultory round of short-lived talks aren’t likely to benefit anyone, Seoul should attempt to turn the negotiations into something more substantive and meaningful. Doing so is a long shot. But if successful such an effort would be something for which all of us could give thanks.

Doug Bandow is a Senior Fellow at the Cato Institute and a former Special Assistant to President Ronald Reagan. He is the author of Tripwire: Korea and U.S. Foreign Policy in a Changed World and co-author of The Korean Conundrum: America's Troubled Relations with North and South Korea.