The Ugly Truth About Avoiding War With China 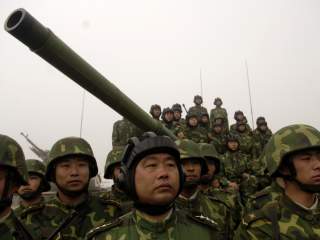 While ISIS is the threat that keeps Washington policymakers up at night, it’s the rise of China that has international relations theorists in a panic. Graham Allison argues persuasively that China’s rise portends a classic Thucydides Trap. His research shows that in twelve of the last sixteen cases over the past five hundred years, when a rising power challenged an established one, the result was war. John Mearsheimer, somewhat more bluntly, warns that “China cannot rise peacefully.” It’s an impending great power clash that makes the threat from ISIS look like child’s play.

But China threatens the United States only insofar as America insists on being the dominant power in China’s backyard, a policy that actually contributes very little to U.S. security. If we abandon our strategy of primacy, the risk of a clash will shrink away. If we try to contain China’s rise, on the other hand, these predictions of doom may prove right.

The current approach to China boils down to a kind of measured containment. It manifests in essentially in three ways:

3) further integrating U.S. economic engagement in the region in a way that marginalizes, and in some cases excludes, China.

But containment is problematic: it carries the dubious presumption that China’s most likely reaction to U.S. expansion in the region is to become a docile power, eager to give up its regional ambitions. In reality, Washington’s determination to maintain dominance in East Asia is much more likely to generate an intense security dilemma.

To understand why, we have to try to see the world through China’s strategic lens. According to Andrew Nathan and Andrew Scobell, China sees America as “the most intrusive outside actor in China’s internal affairs, the guarantor of the status quo in Taiwan, the largest naval presence in the East China and South China seas, [and] the formal or informal military ally of many of China’s neighbors.” The Chinese view the United States as “a revisionist power that seeks to curtail China's political influence and harm China's interests.”

China’s feelings of encirclement are not unwarranted. America’s presence along China’s maritime periphery is highly militarized and provocative, with the U.S. Pacific Fleet conducting countless exercises and training events with dozens of countries in the region. Washington’s massive military presence on the Korean Peninsula, and just across the East China Sea on the southern tip of the Japanese archipelago, are perceived as substantive threats to Chinese security. America’s position as the largest naval presence in the East and South China Seas also stokes fear in China, particularly because roughly 40 percent of Chinese oil imports come by sea and pass through sea-lanes that are subject to interdiction by the United States.

Currently, China’s “obvious orientation,” writes Lyle Goldstein “is defensive,” although “those tendencies could change if Beijing perceives that its strategic environment has substantially worsened.” So, what today might constitute a defensive Chinese foreign policy could in the future transform into a more aggressive stance if increased U.S. military presence in the region convinces Beijing that it is under threat.

Fortunately, the United States can relinquish its outsized hegemonic role in East Asia without damaging its core interests. Nothing in China’s foreign policy indicates any intention to preemptively or preventively use force against America’s or its allies’ sovereign territory. Despite its naval buildup, China has not credibly threatened to cut off sea lines of communication or disrupt trade routes. The United States is arguably the most secure great power in history. With weak and pliant neighbors to its north and south, vast oceans to its east and west and a superior nuclear deterrent, it is remarkably insulated from external threats. Maintaining military predominance in East Asia simply doesn’t add much to our unusually secure position.

But primacy does impose real costs. Promising to defend a host of China’s neighboring rivals, and maintaining tens of thousands of forward deployed troops and more than half of U.S. naval power in Asia entail enormous budgetary expenditures that could be kept in productive sectors of the economy. There are also the latent costs of being entrapped into unnecessary wars. Conflict over the sovereignty of Taiwan or uninhabited islands in the South China Sea risks entangling the United States in a regional war that serves the interests of other countries, not its own.

Primacy could conceivably be justified if the United States derived commensurate benefits. That does not appear to be the case. As Robert Jervis has written, “the pursuit of primacy was what great power politics was all about in the past,” but in a world of nuclear weapons, with “low security threats and great common interests among the developed countries,” the game is not “worth the candle.” Charles Glaser similarly argues, “Unipolarity is much overrated.” It is not necessary to protect core national interests and in fact causes the U.S. to “lose track of how secure it is and consequently pursue policies that are designed to increase its security but turn out to be too costly and/or to have a high probability of backfiring.” Nor does U.S. dominance reap much in the way of tangible economic rewards. Daniel Drezner contends, “The economic benefits from military predominance alone seem, at a minimum, to have been exaggerated. . . . There is little evidence that military primacy yields appreciable geoeconomic gains” and therefore “an overreliance on military preponderance is badly misguided.”

The struggle for primacy in East Asia is not fundamentally one for security or tangible economic benefits. What is at stake is largely status and prestige. As the scholar William Wohlforth explains, hegemonic power transitions throughout history actually see the rising power seeking “recognition and standing rather than specific alterations in the existing rules and practices that constituted the order of the day.” In Thucydides’ account of the Peloponnesian War, for example, “the rise of Athens posed unacceptable threats not to the security or welfare of Sparta but rather to its identity as leader of the Greek world.” Similarly, the power transition between a rising Germany and a dominant Great Britain in the lead up to World War I was characterized by an “absence of tangible conflicts of interests.” U.S. paranoia over the rise of China is less about protecting significant strategic and economic returns, which are marginal if not actually negative, and more about a threat to its status, prestige and reputation as the world’s sole superpower. In no way is that a just cause for war.

In contrast to today’s foreign policy, in which the United States maintains a global military presence and routinely acts on behalf of peripheral interests, a more prudent approach would define U.S. interests more narrowly and reserve U.S. intervention for truly vital national interests. Joseph M. Parent and Paul K. MacDonald advocate retrenchment, which includes deep cuts to the defense budget and a gradual withdrawal of U.S. troops from Europe and Asia. “Faith in forward defenses is a holdover from the Cold War,” they argue, “rooted in visions of implacable adversaries and falling dominoes [that] is ill suited to contemporary world politics.” Barry Posen similarly argues the United States “should reduce, not increase, its military presence” in response to China’s rise. By narrowing U.S. commitments in the region, wealthy and capable allies can take responsibility for their own defense and balance against China. Meanwhile, the United States can extricate itself from potentially perilous entangling alliances.

The United States pursued dominance in East Asia long before any concerns about a Chinese superpower, so continuing to justify primacy on those grounds is somewhat fishy. But even assuming China’s continued economic growth, the prospect of China achieving regional hegemony is no sure thing, an insight that should temper the inflated level of threat supposed by primacists.

Regional hegemony requires China to develop uncontested dominance in its sphere, but China is surrounded by major powers that would resist such a gambit. India, which harbors great power ambitions of its own, is protected by the Himalayas and possesses nuclear weapons. Japan is protected by the stopping power of water and is wealthy enough to quickly build up its military and develop nuclear weapons if it feels threatened by China. Russia can check Chinese power in Central Asia and draw Beijing’s focus away from maritime dominance in the Pacific inward toward the Eurasian heartland. China’s serious demographic problems as well as its restive provinces like Xinjiang and Tibet remain top level concerns for Beijing and add to the difficulty of obtaining true regional hegemony. The United States can withdraw from East Asia and still “have ample warning and time to form alliances or regenerate forces before China realizes such vast ambitions.”

There are several cogent reasons—economic interdependence, nuclear deterrence and the general obsolescence of great power war, among others—to be skeptical of warnings that conflict between the United States and China is inevitable, or even likely. Nevertheless, history shows that great power transitions are dangerous. If outright war is not in the cards, a long, drawn-out, burdensome cold war is quite plausible. If Washington is tempted to maintain or expand its reach in East Asia to contain China’s rise, the chances of conflict increase, as do the associated costs short of war, such as bigger defense budgets, strengthened security guarantees to allies and increased deployments.