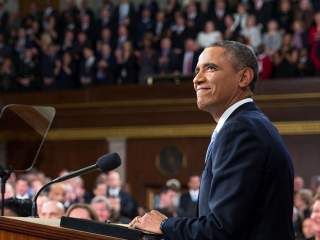 Barack Obama’s final State of the Union address sent a clear message, if not one the president had in mind. The text was a jumble of big themes and petty policies. What they added up to, however, was an admission that liberalism has lost its bearings. Even its most exalted spokesman—the man who holds the highest office in the land; the leader who confronted the Great Recession; our first black president—has nothing to say, at a moment when liberalism is decisively losing ground here and abroad.

Donald Trump and Bernie Sanders offer only the first hints as to what may replace the liberalism of the eighty-year-old welfare state. Trump is no fascist, but he is a demagogue who accurately senses that he need not mouth liberal pieties—voters will reward him for attacking immigrants, free trade and Muslims. Sanders, on the other hand, actually is a socialist, albeit one who by European standards may be to the right of some British Tories. Trump and Sanders both show, however, that pushing the boundaries of politics away from the liberal center has become a sound strategy, if not yet a winning one.

Obama made veiled references to Trump throughout the State of the Union. He also appropriated a dash of Sanders’s rhetoric, delivered without any of the Vermont senator’s characteristic conviction: “Working families won’t get more opportunity or bigger paychecks by letting big banks or big oil or hedge funds make their own rules at the expense of everyone else; or by allowing attacks on collective bargaining to go unanswered,” Obama blared in his liveliest moment. “Food Stamp recipients didn’t cause the financial crisis; recklessness on Wall Street did.”

That’s true enough and more passionately put than almost anything else the president said last night. But such red rhetoric is only preamble to beige policies. How about “pre-K for all” and “providing two years of community college at no cost”?

Timid technocracy is as high and far as Obama aims. That’s bad enough, to be sure: “Say a hardworking American loses his job — we shouldn’t just make sure he can get unemployment insurance; we should make sure that program encourages him to retrain for a business that’s ready to hire him. If that new job doesn’t pay as much, there should be a system of wage insurance in place so that he can still pay his bills.”

This is typical of Obama’s last-gasp liberalism: instead of a simple program that even conservatives and libertarians might grudgingly accept—just give money to the poor, perhaps through the “negative income tax” once mooted by Milton Friedman—the president imagines kind, competent government overseeing our labor markets. “Wage insurance,” meanwhile, sounds like it will wind up costing those who can least afford it about as much as health insurance has under Obamacare.

The recipe is always for more meddlesome government, but it’s hard to see such programs generating in 2016 the enthusiasm that the New Deal or Great Society once excited. There’s no sense of momentum to Obama’s liberalism, just as there’s none to Republican talk about tax cuts—these are dead languages, once spoken eloquently by the politicians of thirty or fifty years ago but today mere formulas to be recited.

Obama is the unhappy technocrat who landed in the role of a world-historic figure. His defenders want to believe he really would have delivered hope and change, had he not been frustrated by an opposition party that rudely dared to oppose him. Yet Bill Clinton faced Republican intransigence, too, and even got impeached, a greater indignity than anything Obama has suffered. Clinton, however, got to reap the harvest of peace and prosperity sown by more serious statesmen over the decades of the Cold War. His liberalism did not have to do any work—just get out of the way.

When Obama came into office the country was in a tailspin, and if it was to do more than muddle through, he had to lead. Instead, he has just managed. But he could have done worse—imagine how badly a man with a bolder vision might have mishandled Russian aggression in Ukraine or the disintegration of Syria. Obama has not started World War III, and he does recognize, as he put it last night, that America “can’t try to to take over and rebuild every country that falls into crisis. That’s not leadership; that’s a recipe for quagmire, spilling American blood and treasure that ultimately weakens us. It’s the lesson of Vietnam, of Iraq — and we should have learned it by now.”

Unfortunately, Obama’s foreign policy is the mirror image of his feckless domestic policy—benevolent technocracy as grand strategy. The planner-in-chief has so many tools at his disposal: “a global coalition,” American soldiers to fight Ebola in Africa, moderate rebels and Jeffersonian freedom fighters on the ground wherever there’s conflict. And of course, “a Trans-Pacific Partnership to open markets, protect workers and the environment, and advance American leadership in Asia.”

Some of the policies themselves are sound—but what do they add up to? Obama boasted that in the war (or whatever it is) against ISIL, “With nearly 10,000 air strikes, we are taking out their leadership, their oil, their training camps and their weapons. We are training, arming and supporting forces who are steadily reclaiming territory in Iraq and Syria.” Well and good: but what will prevent the emergence of ISIL 2.0 once that territory is “reclaimed”? Fifteen years of technocratic efforts in Afghanistan have not produced a stable liberal government—which is why Obama has had to extend the U.S. mission there. Whatever emerges in Syria from Kurds, rival Sunni radicals, Shi’ites and Assad struggling with one another for power is apt to be both bloody and unstable.

This is the ugly truth that American liberalism will not confront: that the rest of the world not only does not want to operate according to our values, it cannot. And those values are hardly as sacrosanct at home we may wish to believe. Powerfully illiberal movements are in fashion across our political spectrum: the First Amendment counts for as little among the social justice warriors of the campus left as it does among the Muslim-fearing right; even the Libertarian Party’s Gary Johnson has talked about signing a law to ban wearing burqas in public. (He later retracted that.)

Obama ended his remarks with a call for greater civility and trust in public life—as well as for getting money out of politics. He professed himself “optimistic that unarmed truth and unconditional love will have the final word.” This is liberalism at its most suicidal: stronger words and clearer vision are needed if the center of American politics is to hold.