Is the UK Getting Dangerously Friendly with China? 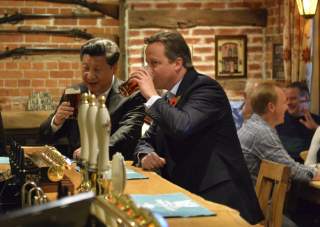 Perfidious Albion strikes again. Or so one would be forgiven for believing, given the international press coverage of Xi Jinping’s historic state visit to the United Kingdom. Britain has “sold out” to the Chinese, critics argue, by downplaying widely held Western concerns over human rights, cyber security and maritime disputes in the South China Sea in hopes that Beijing will funnel lucrative investment towards Britain. In doing so, London is pursuing a mercantile-realist brand of foreign relations that undermines U.S.-led attempts to coax China into ameliorating its foreign policies and improving its record on human rights.

To be sure, there is some truth to these criticisms. Prime Minister David Cameron has been muted in his criticism of China’s human rights record, and the prominent role afforded to Chancellor of the Exchequer George Osborne—Britain’s cabinet minister responsible for finance—symbolized just what the British government’s priorities are when it comes to Sino-British relations: trade, investment and a cordial strategic understanding.

Although Xi’s visit was somewhat tainted by news coverage that linked Britain’s imperiled steel industry with cheap Chinese imports, Britain’s leaders will probably be cheered by what was cemented between the two countries: Chinese capital will play a leading role in financing the development of a new nuclear power station in Britain, Carnival cruise ships will be exported to China to the tune of 2.6 billion pounds and Rolls-Royce will benefit from a major deal with the Chinese airline company HNA Group.

These deals only compound Britain’s growing closeness with China. In March of this year, for example, Britain became the first European nation to join the China-led Asian Infrastructure Investment Bank (AIIB), a move condemned in Washington as an example of Britain’s unwise “accommodation” of China. Officials in Washington worry that the AIIB will undermine the influence of Western-led international institutions such as the World Bank, and so it came as some surprise that Britain—usually a country that can be relied upon to follow the lead given by U.S. officials—would break ranks and throw its lot in with the Chinese on such an important matter.

But Britain’s strategy of forging closer ties with China is nothing new, and certainly predates the current Conservative government. In November 2008, for example, Foreign Secretary David Miliband quietly altered Britain’s longstanding foreign policy towards Tibet in order to smooth relations with the authorities in Beijing. For nearly a hundred years, the official stance of the British government was to recognize Chinese “suzerainty” over Tibet but not its “sovereignty.” This meant that while China was the ultimate power in Tibet, the province was distinct from other Chinese provinces—it was a vassal state or protectorate, but not an integral part of China proper.

The distinction was held dear by those who campaign for greater autonomy for Tibet. Most importantly, it allowed the Tibetan government-in-exile to argue that, at least at the time of the Simla Accords signed in 1914 between Britain, China and Tibet, it was generally accepted that Tibet was not under Chinese sovereignty. It follows that, while China’s 1950 invasion of Tibet and subsequent policies of assimilation might have established de facto control over the province, such actions could never erase the de jure exceptionalism enjoyed by Tibet.

At the time, Miliband justified his government’s change of policy by arguing that the concept of suzerainty was an anachronism in the twenty-first century. He was right on this point, of course. But it does not follow that the British government was obliged to recognize complete Chinese sovereignty over Tibet, or to erase any distinction between Tibet and other Chinese provinces in the language of official British foreign policy. That Miliband chose this path was, instead, likely indicative of a hardheaded realpolitik desire to pave the way for closer Sino-British ties.

Or consider London’s response to the so-called Umbrella Movement protests in Hong Kong last year. When British parliamentarians were banned from traveling to Hong Kong in the midst of the demonstrations, officials in London were hardly scathing of their Chinese counterparts. The last colonial-era governor of Hong Kong, Chris Patten, has gone on record accusing London of refusing to support pro-democracy groups inside the territory out of fears that Beijing will retaliate by curtailing the trade relationship. Again, the inescapable conclusion is that Britain’s most high-profile leaders are more interested in currying favor with Beijing than anything else.

Yet whether the issue is Tibet or Hong Kong, human rights or security, the elephant in the room cannot be avoided: surely, every right-minded and informed observer of international affairs would agree that Britain in the twenty-first century simply lacks any meaningful influence over China. Does it really matter if Britain recognizes China as sovereign or suzerain in Tibet? Is London really in a position to intercede on behalf of Hong Kong’s pro-democracy campaigners? Who believes that China’s foreign or domestic foreign policies are made with reference to what the British government is saying?

Certainly, this is how Martin Jacques views Britain’s recent overtures towards China. “Countries either change with the world or are rendered insignificant and marginal by those changes,” he writes. “The British government has recognised this and deserves support for doing so.” In other words: there is nothing untoward or unseemly about Britain responding to China’s rise in power in ways that serve Britain’s self-interest. What is wrong with ditching toothless anti-China policies in favor of pro-Chinese policies that might actually benefit the people whom the British government is charged to represent—especially when others are doing the same?

The debate over the wisdom of a rapprochement with China is likely to be debated within the United Kingdom for some time to come. Perhaps only time will tell if a “golden era” is really in the offing. But on the western shores of the Atlantic, a consensus seems already to have emerged: Britain is straying from its traditional closeness with the United States on matters to do with global governance, and this is a very bad thing. For decades, Britain took pride in being a “bridge” between Europe and America; now, Britain’s prime minister speaks openly about being China’s “best partner in the West.” How can China’s influence be contained if even countries like Britain are drafting into Beijing’s economic orbit?

Of course, Britain is hardly about to shelve its close military, economic and diplomatic ties with the United States in favor of its newfound friendship with China. Nor does China’s growing economic clout necessarily portend a zero-sum contest between it and the United States. But London’s charm offensive against Beijing is an interesting glimpse of a coming multipolar world in which self-interested middle powers and small states seek close relations with multiple great powers, not just one. For in tomorrow’s world, the United States and its vision of world order will not be the only game in town—if it even is today. That is a reality that Washington will quickly have to become used to.