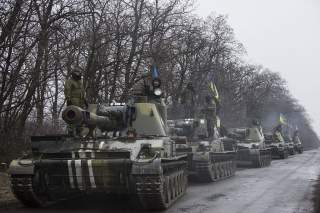 Similarly, the growing gulf between Ukraine’s national cultural and historical narrative and that promoted by Moscow promises to continue diminishing and dividing the region’s social capital. Kiev has been wise to resist pressure from nationalist politicians to denigrate the Russian language, but there has been increasing and troubling evidence of revisionism in state-sanctioned reforms of Ukraine’s national archives and teaching curriculum. Anti-Ukrainian propaganda has been absolutely rife in state-supported Russian-language media, and must be stopped. No matter how the Donbass conflict evolves, Russia and Ukraine will remain neighbors for eternity, and it can be in neither side’s long-term interest to erode mutual understanding and foster intolerance.

Up to now, the United States has played an important but secondary role in managing the Ukraine-Russia conflict, preferring to negotiate and apply pressure jointly with European countries with far greater economic leverage on both Russia and Ukraine. Yet Washington cannot overlook its own vital interests at stake in this ongoing conflict, nor continue the contradictory and occasionally damaging role of its uncertain engagement in the process so far. The transition to a new U.S. administration provides a useful inflection point for a revised and reinvigorated U.S. approach to conflict management and support for long-term resolution.

Before concluding, it should be noted that this paper has focused primarily on the urgent need for conflict resolution in Donbass, and therefore only briefly mentioned the problem of Crimea, which is yet another central driver of conflict between Russia and Ukraine. Washington should have no illusions that Russia will abandon its newly acquired territory, nor that Ukraine will accept nominal financial payment or other compensation to surrender its legitimate and sovereign rights. However, for a variety of reasons, especially the low likelihood of further military conflict over Crimea, U.S. policy has and should continue to concentrate on settling the Donbass conflict. It is likely that the default path on Crimea will repeat the U.S. position toward Soviet occupation of the Baltic states from 1939 to 1991: long-term nonrecognition.

Even under the best of circumstances, the probability that the Russia-Ukraine conflict can be fully resolved remains low. However, in light of the risks to vital U.S. interests in the region, and the implications for U.S. relations with Europe and Russia on a wider global agenda, Washington cannot afford to miss a window of opportunity to push for concerted progress on de-escalation, disengagement and trust building. The relative openness of the parties to direct U.S. involvement, and the potential for Washington to apply its geopolitical clout through coordinated diplomacy, may offer just such a window.

This paper will appear in the Center for the National Interest’s forthcoming publication, “A New Direction in U.S.-Russia Relations? America’s Challenges and Opportunities in Dealing with Russia.”