The Ultimate Game of Chicken: The West vs. Russia 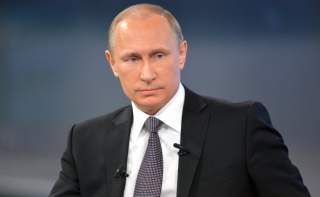 Reviewing Vladimir Putin's annual marathon national call-in show (and subsequent press conference), the statement that I found most revealing (beyond the categorical denial that there are no Russian troops deployed in Eastern Ukraine) was Putin's comment that Russia was not Iran. This basic statement—a response to a question as to whether or not Russia might face the same set of crippling sanctions that severed many of Iran's connections to the global economy—reflects a confidence that is in marked contrast to the statements made by Western leaders over the last six months. Indeed, it has been a near article of faith in many Western capitals that targeted sanctions against the Russian economy and key Russian business and political figures would force Moscow to reverse course on its Ukraine policy without requiring the West to make much of a sacrifice.

"Russia is not Iran" carries with it several meanings. The first is the declaration that Russia cannot be pressured as a result of Western sanctions. In January, President Barack Obama had declared at the State of the Union, "Russia is isolated with its economy in tatters." Putin, in his comments yesterday, admitted no such thing, highlighting the first signs of a slight economic recovery and touting relations with its partners in the Shanghai Cooperation Organization and the BRICS (Brazil-Russia-India-China-South Africa) forum. These countries will not even agree to limited global sanctions on Russia.

Putin at several points suggested that, despite their best efforts, the West had failed to compel Russia to change course. He intimated that the West had taken their best shot and that Russia, although taking some hits economically (higher inflation and unemployment, reductions in growth and investment) was still in good shape. In fact, Putin declared, sanctions had a silver lining in that they were spurring indigenous industrial and agricultural production to replace goods and services that Russia had previously found easier to import from Western providers. Predicting substantial economic recovery in two years—prior to the next round of legislative and presidential elections—Putin offered his audience the firm assurance that there is indeed light at the end of the tunnel and Russia would emerge stronger than before—and still in possession of Crimea.

The "Russia is not Iran" declaration also carries a second meaning. The global economy was able to stand cutting Iran from the mainstream of the global economy. Russia is a harder nut to crack. Too many countries are dependent on its energy exports; it is a major supplier of military and nuclear technology; it is a key consumer of important technological goods and services. As Putin was speaking, Gazprom company sources were indicating that the Italian firm SAIPEM is likely to gain the contracts to construct the Turk Stream pipeline across the Black Sea—building on the foundation SAIPEM had laid for the now-defunct South Stream line. German firms like Siemens are fretting about the possible loss of contracts for high-speed rail equipment that Asian firms would be more than happy to provide. And no one is talking about being able to switch from Russian energy to other sources. Even if a final deal is reached with Iran and Western sanctions on its energy industry are lifted, large-scale supplies of Iranian natural gas would be in no position to reach European markets until 2019, while the collapse in world energy prices over the past eight months has damaged the nonconventional hydrocarbon industry in North America, and with it, the prospects of sending large amounts of shale gas to Europe, since it is now less likely that firms will want to make the massive infrastructure investments needed to realize such plans.

The Russian calculation is that Western countries have imposed as many sanctions as they can without risking further economic damage to their own economies. But there remains one major sword that has not been drawn from its scabbard; the West could duplicate a set of sanctions imposed on Iran in 2012: exclusion of Russia from the Society for Worldwide Interbank Financial Telecommunication (SWIFT) network, which facilitates the movement of funds. Such a move could cripple the Russian economy by denying Russian banks and companies the ability to make or receive payments via transfers. Although this idea has been floated by some U.S. lawmakers (like Senators John McCain and Marco Rubio) and discussed by some European leaders (like British prime minister David Cameron), it was ruled out last month in discussions between Europe and the United States as premature, given the damage that would also be inflicted on the global economy as a whole. Putin's comment that "Russia is not Iran" reflects an assessment that this is a step that the West will not take—an assumption that could prove to be a severe miscalculation if Western politicians decide that they have exhausted other alternatives to force Russian disengagement from Ukraine.

The West, Russia and Ukraine are all engaged in a geopolitical game of chicken, with each player assuming that the other will blink first. Putin put the West on notice that he has no such plans—and that Ukraine's crisis is accelerating. What will be the Western response?