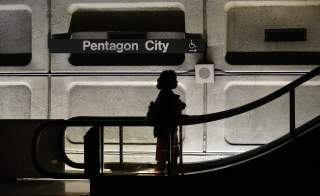 Who can forget the Pentagon hammer that cost $600? It may be apocryphal, but it has symbolized inefficient spending for more than two decades. And last year a newspaper headline breathlessly shouted, “Pentagon buries evidence of $125 billion in bureaucratic waste.”

So seemingly only a heretic would question the need to audit the Department of Defense. But what if a Pentagon audit represents a pyrrhic victory—a quest where the results won’t justify the cost?

The Pentagon is cooperating, having recently announced that it’s ready to undergo a financial audit after years of preparation, with DOD budget secretary David Norquist noting, “It is important that the Congress and the American people have confidence in DOD’s management of every taxpayer dollar.” Norquist went on to describe how annual audits will now become part of everyday life at DOD.

To be sure, DOD is to be commended for the hard work to get to this point. But before going too far down this road, we should assure ourselves that a costly and laborious annual financial audit of DOD, performed using commercially derived strict Generally Accepted Accounting Principles (GAAP), will result in a better-functioning DOD. It’s not at all clear it will.

Congress was the driving force behind the Pentagon audit, and has long bemoaned the fact that it has never been audited. Starting in 1990, and then again in 2010, Congress passed laws that required the Pentagon to undergo a full financial audit starting in fiscal year 2018.

Since then, elected officials rarely miss an opportunity to emphasize the importance of the audit. Sen. Chuck Grassley, for example, said in a recent speech on the Senate floor that “26 years of hard-core foot-dragging shows that internal resistance to auditing the books runs deep,” while in April, eight U.S. senators told Defense Secretary Mattis that they were concerned, stating that “clean audits inherently provide controls that guard against fraud, waste, and abuse.”

Reasonable, right? But at what cost? Norquist also noted that to conduct the annual examination will require a small army of auditors—some 1,200—to examine every nook, cranny and ledger of the Pentagon’s sprawling bureaucracy. Norquist also estimated that the total cost of the 2018 audit will be an eye-popping $847 million. That’s a lot for an already cash-strapped Pentagon—the equivalent of eight Air Force F-35 fighter jets.

Why so expensive? Because, like corporate audits following similar standards, the Pentagon audit looks at much more than financial “books.” It also spot-checks property records and estimated values of millions of pieces of equipment and facilities, such as vintage armored personnel carriers and World War II–era armories, verifies data in personnel records for accuracy, such as marriage certificates and birthdays, and examines thousands of other records and systems.

The audit is larger in scope and size than any other attempted of its kind, dissecting a vast global enterprise of more than two million people. To perform this audit is both expensive and time-consuming, and in many cases duplicates already-existing proven DOD oversight mechanisms.

So why do it? Good question. U.S. corporations by law undergo annual strict financial audits to assure potential investors in capital markets of the soundness of their offerings as described in their financial statements. But DOD is not a corporation, and has no corresponding need.

And, perhaps most significantly, financial audits are not the best tools for discovering inefficiencies, waste or fraud. For those purposes, there are far better methods such as zero-based budgeting, contract or waste audits, strong management and continuous process-improvement techniques. Indeed, the few U.S. companies that don’t have to undergo a financial audit usually avoid it, since it usually does not result in significant reductions in waste or fraud compared to the costs involved.

U.S. taxpayers deserve confidence that the Defense Department operates in an honest and efficient manner. But at a time when our military is deteriorating for want of adequate resources, highlighted daily by ship accidents, crushing maintenance backlogs and munitions shortages, an $847 million annual audit—accompanied by, at best, modest expectations for improvement—is a mistake the Pentagon can ill afford.

Congress and the DOD should work to arrive at a solution that delivers confidence that DOD is wisely using its money, but at a much lower cost. The starting point should be figuring out what essential elements of an audit must be accomplished, and how to save money in the effort.

Thomas Spoehr, the director for the Center of National Defense at The Heritage Foundation, is a retired Army Lieutenant General who formerly led the Army’s Business Transformation and Program Analysis and Evaluation directorates from 2012–16.