The Unbearable Logic of the European Union 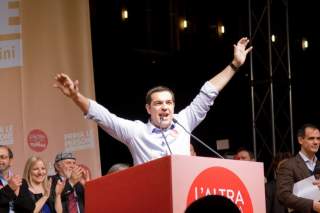 “In the sunset of dissolution, everything is illuminated by the aura of nostalgia, even the guillotine.”

― Milan Kundera, The Unbearable Lightness of Being (1984)

Back in February (“Blame Germany If Europe Implodes”), TNI discussed how Germany’s hard line on collecting Greece’s uncollectible debt might lead to the dissolution of the European Union. “The Greeks have received all the blame for the crisis,” we noted, “but the bankers in Frankfurt deserve the lion’s share of the culpability for making such ill-advised loans in the first place.”

The recent gyrations of the global credit markets, in reaction to an impending Greek default and exit from the EU, confirm seemingly that the experiment in currency union in Europe must be revised. Without a convergence of fiscal regimes and ultimately measures like inflation and productivity, the EU nations must necessarily grow apart under the shared tent of a common currency. Lacking the federal structure of the United States, the EU only has a trade and currency union, leaving the questions of spending and debt issued up to each nation to decide unilaterally.

The idea of twenty-eight sovereign nations voluntarily managing their financial affairs within the EU was never a particularly realistic assumption, but we have seen this film before. At its inception, despite the federal overlay, the United States was merely a union of independent states. The furnace of the Civil War, then mobilization for WWI, and the subsequent progressive experiments in building a federal regulatory state in Washington, eventually combined the former English colonies together into one. Today, the United States is a hybrid, a uniquely American compromise between a fractious classical Greek confederation and a unitary European state.

So far, the EU has not found a catalyzing event to allow the twenty-eight-nation confederation and especially the nineteen nations that use the euro to create a unified nation, with collective control over a single ledger for spending and debt. This is not to say that such an outcome is either desirable or possible, merely that the fact of a common currency implies that the EU member states have roughly the same rates of growth, inflation and competitiveness or must adjust accordingly. In other words, the stronger nations of the union must agree to subsidize the weaker members. The decision the EU faces is the same that families face each day, namely that the strongest must care for the weakest. Otherwise, there is no family, no union.

Since signing a memorandum with the International Monetary Fund (IMF) in 2010, Greece’s total debt has increased, even as its economy has contracted under the weight of austerity. Rather than insisting on the impossible, the EU, IMF and other interested players ought to make a virtue of necessity. Instead of demanding conditions that Greece clearly cannot meet, why not instead start the restructuring process with a debt reduction? The IMF ought to condition further support for Greece on its shouldering the cost of servicing the new, lower debt plus a commitment to reduce debt further in the future.

But even with agreement on an IMF debt-restructuring effort, Greece may still not be able to remain in the euro without a continuing subsidy. Hans-Werner Sinn, president at Ifo Center for Economic Studies in Munich and one of the most prominent economists in Germany, told Tom Keene of Bloomberg Television this week:

“It is time to face the truth; for the creditors to accept that the debtors are bankrupt. [Greek finance minister Yanis] Varoufakis has said [that] his country is bankrupt and this is certainly right. But why is it bankrupt? It is bankrupt because it lacks competitiveness, and it lacks competitiveness because it has become too expensive in the inflationary credit bubble that the euro brought. And that is the fundamental problem. They have to come down with their wages and prices or exit and devalue.”

Of note, Bloomberg’s Keene has been asking for months when the “adult conversation” is going to occur with respect to Greece and debt restructuring. The bottom line with respect to Greece and the EU as a whole is that you cannot expect the less-competitive states in the EU to remain unless you provide a subsidy, as the United States does within its federal union via revenue sharing among the states. The stronger EU nations have tried to insist that the weaker nations live voluntarily with much stricter rules on spending and debt issuance, a formula for eventual disaster if changes in the EU structure are not made soon.

Rather than worrying about nations such as Greece or even the United Kingdom leaving the EU, perhaps nations such as Germany should be demanding that the nations that certainly will remain within the federation agree to fiscal convergence in the near term. This would clearly delineate between countries that can accept such discipline and those that cannot, leaving a remaining “core” EU that can realistically share a common currency. Those nations that cannot live within strict fiscal and monetary discipline could remain within the EU common market, but would have to revert to their own currencies.

It is pretty clear that Germany’s financial community views further cash advances to Greece as good money thrown after bad, without restructuring of both the economy and debt. Reflecting this political reality, Greek prime minister Alexis Tsipras has publicly ridiculed the IMF for pursuing a strategy that everyone knows has failed.

Germany’s Angela Merkel, meanwhile, too smart a politician to take Tsipras’ bait, says she will do “everything possible to keep Greece in the euro.” But the reference to what is “possible” may preclude what is ultimately required, namely an open-ended commitment from the European Central Bank (ECB) to support Greece. If the ECB’s and the EU’s political leaders really want to keep Greece in the currency union, they must be prepared to walk down the road toward full fiscal convergence as well.

Recalling our last post, it is possible to blame the Germans for the Greek crisis. Germany’s leaders supposed that it was possible to make loans to Greece to finance German exports of goods and services, this even though Greece clearly was less competitive than Germany and other core EU states. But the real issue illustrated by the Greek crisis is that the EU must evolve and change in order to avoid this situation in the future. Without fiscal convergence and union, some larger EU states such as Italy and Portugal face a similar fate.

The good news, of sorts, is that the forces behind eventual fiscal convergence in the EU are inexorable. Investors and banks have largely shed their exposure to Greece, leaving the ECB and taxpayers in Euroland ultimately on the hook for the cost. When the EU’s common currency was created over a decade ago, Europe’s political leaders probably did not foresee a debt crisis in Greece as a catalyst for success. But it may be that the Greek debt crisis will provide the political impetus for the core nations of the EU which are part of the eurozone to finally agree on completing the process of economic and political union.