The Unconventional Plan for Dealing With China 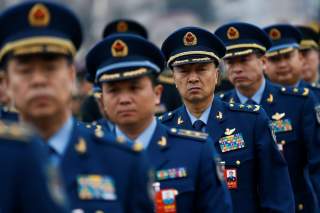 Military-to-military relationships continue to play an important role in foreign policy, though these roles have changed throughout time. Previously, these relationships were as simple as several military forces allying themselves to defeat a common enemy. In the present, the dynamics of soft power and hard power have changed the ways military forces interact, adding additional certain nuances to these relationships. Military relationships between the United States and China are particularly important, specifically because both nations are so closely aligned on economic fronts. However, because of differing and occasionally opposing viewpoints on foreign policy, America and China are simply limited when conducting traditional military-to-military techniques. Therefore, what steps can America—specifically America’s military—take to counter Chinese political and military responses? Also, how can U.S. forces influence cooperation with these Chinese counterparts to ensure lasting positive benefits for all?

The United States approach to improving U.S.-Chinese relationships currently lies in two direct military efforts: exchange programs and joint exercises. These methods are extremely limited in the benefits that they provide the United States and China due to the political and economic competition that the two nations have with one another. That is something particularly underlined in American legislation such as the 1979 Taiwan Relations Act, which defines an official American relationship with the Chinese-unrecognized Taiwan. Additionally, the 1991 Foreign Relations Authorization Act banned U.S. arms exports to China and the 2000 National Defense Authorization Act set specific rules governing U.S.-China military-to-military relations.

One example of a traditional military-to-military relationship that is strained in the case of U.S.-Chinese military-to-military relations are exchange programs. The exchange programs that America offers with its allies range anywhere from the three week airborne course, to the year-long Command and General Staff College course, and even to the entire four year West Point commissioning program. However, the only consistent participation of Chinese military in American courses is through the United States Military Academy’s Sandhurst Competition, which is where different military cadets from around the world are evaluated and allowed to compete in various military skills. China only recently began participating in the competition and so far has had just one team representing numerous the country’s military academies and schools.

Joint training exercises are also an important tool utilized by the United States to develop military-to-military relationships. In the Pacific region, these exercises include the yearly Rim of the Pacific Exercise (RIMPAC) and Cobra Gold, as well as quarterly/bi-yearly Joint Combined Exchange Trainings (JCETs), with the most notable of these exercises involving active participation from the Chinese being RIMPAC, as opposed to the observer status China possesses in Cobra Gold. However, the yearly month-long RIMPAC simply possesses too narrow of an influence to truly have an impact on any long-term U.S.-Chinese relations.

Economic incentives are tools that possess a great deal of influence when dealing with China, particularly because China’s own foreign policy has the direct stated objective to “ensure and maintain economic development.” While the American military does not have the ability to influence things such as foreign-direct investment, aid, or economic sanctions, it is the gatekeeper of critical trade routes such as the Northern Distribution Network (NDN). The NDN, also known as the modern Silk Road, was first created due to the increased necessitation of supplies to support the NATO effort in Afghanistan. Previously, military supply routes utilized sea-landing sites in Pakistan, followed by airlift into Afghanistan. However, this process was made complicated by Pakistan’s corrupt internal infrastructure, leading supplies vulnerable to Taliban attack and shrinkage by local elements. NDN routes, formed in response to these challenges offered by Pakistani-based supply routes, utilized multiple central Asian countries to provide supplies to Afghanistan, with many of these routes hinging on local-level transactions and handshake deals backed by the influence of all twenty-nine NATO member nations, with the biggest influencer of all being the United States and its military. China has been eyeing the improved infrastructure the NDN routes bring to Central Asia for some time now, seeing it as an efficient method of delivering consumer goods throughout Europe. With these routes primarily being utilized by American and NATO military elements, U.S. forces would be the most viable option in introducing any potential Chinese users to such a pipeline. Another economic incentive that the American military would hold significant weight is military posturing. The Chinese have utilized economic measures to subtly indicate their displeasure with U.S. military actions, as in the case of the American positioning of Terminal High Altitude Area Defense systems in Asia, hurting both itself and South Korea. These measures included the halting of real-estate actions, drops in tourism numbers, and a general decrease of capital outflow to and from both nations. American military posturing, if decreased and conducted with less visibility, would allow for a normalization, and potential increase in Chinese trade with any particular Asian nation, with economic benefits being reaped for all. A last economic incentive within the purview of the U.S. military includes the utilization of military-grade technology. Items such as advanced avionics electronics and improved mechanical engines are currently just some of the many things prohibited from exportation to China. The United States military would have a great deal of influence in determining a specific item’s pertinent nature to national security, and thus, its exportation to China. Not only does this have the unintended effect of improving safety measures to meet standardized Western ones, but it also has the intended effect of advancing Chinese technology as a whole in both military and civilian dimensions, for both domestic and foreign use. All in all, the leveraging of economic incentives is an unconventional way in which the U.S. military could improve U.S.-Chinese relations.

Increased emphasis on neighborhood diplomacy is another unconventional way the U.S. military can pursue in order to effect increased U.S.-Chinese military-to-military relations. China has been pursuing such a strategy for some time now, utilizing its economic powerbase to offer infrastructure investment, funding, and other market-growing incentives to these nations. Similarly, the United States has also attempted to conduct similar policies, but has often found itself falling short owing to the fact that American governmental funds almost always come attached with stipulated spending terms. The U.S. military could help revitalize such efforts through civilian channels conducted via military resources. By no means would this be an extension of current direct U.S. military involvement in the Pacific Command region. Instead, examples of neighborhood diplomacy that could be conducted utilizing military resources would include the American military airlift of Chinese medical supplies to remote villages, or the use of joint military personnel and facilities during natural disasters/crisis. Further action items include regular smaller-scale movements of military expertise in civilian applications, to include American and Chinese streamlining of local supply routes for efficiency, or the utilization of the military medical personnel of both nations to teach specialized skills to other Asian nations. These unconventional methods of combining U.S. military strengths with Chinese efforts improve the standing of both nations within Asia, and truly build the foundation of neighborhood diplomacy that both countries strive to practice. The ability to become mentoring “big brothers” to other nations, particularly when such efforts are conducted on a united front, would truly have the intended effect of improving U.S.-China military-to-military relations.

Ultimately, the United States and China must find a way to develop sustainable military partnerships to guarantee exemplary relationships between both nations. The American military has the distinct ability to be the trailblazer of these relationships, with economic incentives and neighbor diplomacy driving cooperation between both nations. With most of China’s foreign policy directed at protecting its growing economy, the U.S. military has the indirect ability to influence U.S.-China relations through the leveraging of economic incentives and by participating in neighborhood diplomacy with nations surrounding China. The American military must begin to focus on developing key relationships through unconventional means between leaders on both sides, setting the stage for cooperation in future times.

Image: Military delegates arrive for the fifth plenary session of the National People's Congress (NPC) at the Great Hall of the People in Beijing, China March 17, 2018. REUTERS/Thomas Peter