The United Nations Is Creating a Security Dilemma for Taiwan 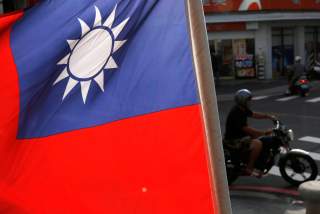 Taiwan and its allies at the United Nations will once again make the case during the UN General Assembly for the meaningful participation of Taiwan within the world body and its specialized agencies.

The world’s twenty-second largest economy with a population of 23.5 million people, Taiwan is also a spectacular—and rare—example of what a people can accomplish when they peacefully transition from authoritarianism to a liberal-democratic way of life. Over the thirty years since the lifting of martial law, Taiwan has deepened its democracy and now occupies an enviable position as one of the safest, freest and most responsible nations, which the World Bank’s Worldwide Governance Indicators project makes amply clear.

Taiwan boasts the freest media environment in Asia in a time of troubling erosion worldwide. Its rule of law and human rights protection mechanisms are a shining example to a region where violations are rampant. Its public-health sector is with few equals, and it is a leader in disease control and humanitarian relief.

Notwithstanding all these accomplishments, Taiwan remains shunned by the United Nations, which insists on de jure sovereignty for membership and continues to operate under a “One China” policy that, for all intents and purposes, leaves Taiwan out in the cold.

Given the UN’s 2030 Sustainable Development Agenda, which pledges to “leave no one behind,” it is no small irony that a modern, democratic and fully globalized Taiwan continues to be shunned even though it has repeatedly signalled its desire to help the international community achieve the bold objectives set out by the agenda.

The injustice done to the peace-loving people of Taiwan is salient, especially when we consider that Taiwanese nationals have repeatedly been denied entry at UN buildings unless they presented a Mainland China Travel Permit.

Be that as it may, it would be naive to assume that principle is what dictates international relations, even within an organization whose foundations rest on such noble ideals. Faced with the realities of international politics and China’s increasingly influence role within the system, Taiwan has nevertheless remained pragmatic and unflagging in its efforts to secure meaningful participation as a responsible stakeholder.

Thus, the reason why Taiwan should be able to share its expertise with UN agencies, and to receive the information it needs from those agencies, is not so much a matter of justice as it is a practical matter. In this interconnected age, terrorists, criminals, disease and bits of digital information have freedom to travel—sometimes instantaneously—so it makes absolutely no sense to create an artificial blind spot simply because of the political preferences of a single member state, regardless of how powerful that state might be. Given the grave risks that affect us all, wherever we are, it is irresponsible to exclude a participant, especially one that is situated in a part of the world where air traffic is dense and where natural threats—from epidemics to earthquakes—are a frequent occurrence.

While ordinary people worldwide may not understand, let alone care, about the admittedly complex politics of the Taiwan Strait, they have every right to expect that global institutions are doing everything in their power to protect them from natural and man-made catastrophes. Leaving Taiwan out of the World Health Organization, the International Civil Aviation Organization, INTERPOL and other specialized UN agencies puts lives at risk all over the world. This became clear during the 2003 Severe Acute Respiratory Syndrome outbreak. As deadlier diseases emerge, the inability of a government to obtain crucial epidemiological information in a timely fashion and share its disease information with global institutions will make the difference between the successful early containment of an outbreak and a global pandemic.

Similarly, Taiwan’s inability to obtain from INTERPOL information on the movement of suspected terrorists from Southeast Asia in the lead-up to the just-concluded 2017 Summer Universiade in Taipei raises possibilities that we can easily imagine. While individual states ultimately shared intelligence with Taiwanese authorities, the additional layers—not to mention the various channels through which the information was communicated—could easily have resulted in the untimely delivery, if not loss, of the crucial intelligence necessary to prevent the entry of extremists into Taiwan and a deadly act of terrorism, which again could have killed participants from around the world.

Like disease and air-control mishaps, international terrorists do not give a second thought to the politics of the Taiwan Strait: they only seek to exploit foibles in the system and wreak havoc. Given the many threats that exist in the twenty-first century, every effort should be made to plug the gaps in the global surveillance system so as to maximize awareness, information sharing and cooperation. The UN, and the community of nations of which it is comprised, is fully aware that a major piece of the puzzle is missing. The continued exclusion of Taiwan through the denial of its requests for meaningful participation is not only a violation of the UN Charter, given its references to the fundamental human rights, dignity and equality of every person; it is, above all, a dangerous gamble that the international community can ill afford.

J. Michael Cole is a Taipei-based senior fellow with the China Policy Institute, University of Nottingham, UK, an associate researcher with the French Centre for Research on Contemporary China, chief editor of Taiwan Sentinel and project coordinator for the Taiwan Foundation for Democracy’s Taiwan Democracy Bulletin.

Image: Motorcyclists ride past a Taiwanese national flag on referendum day that will decide if casinos can be built on the outlying island of Penghu, Taiwan October 15, 2016. REUTERS/Tyrone Siu