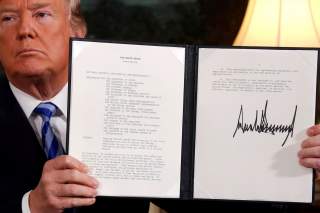 The President of the United States has decided that the best approach to Iran is to speak loudly and carry a big stick—in the hopes that relentless pressure on Iran will either lead to regime change or the country abandoning its contentious foreign policies. Such saber-rattling will more likely enfeeble American power within the region and set U.S. policy on track for yet another dangerous conflict in the Middle East. Just as importantly, increasing tensions with Iran also bode poorly for sectarian de-escalation in the Muslim world. This is because the Shia view American policies without a balance between regional Sunni and Shia actors.

Under Trump, America is going all in with the pro-confrontation camp led by Saudi Arabia and the United Arab Emirates (UAE). The United States has reversed President Obama's policies to take a balanced approach towards Iran and other transnational Shia groups. This shift has included pulling out of the Iran nuclear deal, which has only further deepened the sectarian battle lines in the region. While Trump's strategy is standard combative neocon policy at face value—i.e., ideologically driven opposition to Iran rather than realpolitik—it has also acquired a partisan, sectarian edge with rhetoric and policies that appear as if the United States is taking sides in sectarian conflicts in the Islamic world.

The administration’s narrow focus will provoke precisely what the Trump White House aims to prevent—a more cohesive regional Shia movement under Iran’s protection and aggrieved Shia supportive of countering U.S. influence in the region. In other words, the current U.S. course is narrowing policy discussions both within individual Shia organizations as well as across transnational Shia alliances by closing the door to pro-U.S. policy alternatives. Trump’s policies are causing a consolidation of a shared anti-American security outlook that unites the various groups found across the Shia world.

In October of last year, the White House argued that past U.S. policy was incorrect because it “consistently prioritized the immediate threat of Sunni extremist organizations over the longer-term threat of Iranian-backed militancy.” This statement alluded to and conflated diverse and indigenous Arab Shia forces with Iran and indirectly to groups like ISIS and al-Qaeda. Additionally, Previous Secretary of State Rex Tillerson called for “Iranian militias that are in Iraq...to go home,” prompting a frosty response from Iraqi Prime Minister Haider al-Abadi especially since the rhetoric replicated sectarian language which equated all Arab Shia with the Iranian ethnic identity. These policies together create the perception that the United States has taken a side against the Shia in the struggles ongoing in the region.

Prior American administrations recognized that the path to regional peace requires a non-sectarian approach. However, Trump’s coupling of Iran regime change policy with a regional outlook echoing sectarian rhetoric threatens to upend this fragile understanding. The Bush administration was careful to label Islam as a “religion of peace,” and worked with previous Iraqi Prime Minister Nouri al-Maliki despite his pro-Iranian sympathies. The Obama administration also practiced a pragmatic agnosticism as to its regional partners, as evident in its attempt to thaw U.S.-Iranian relations and its insistence that Saudi Arabia and Iran “learn to share the Gulf.”

When the United States now focuses on Iran as the region’s only “bad state actor”—and no doubt serious concerns and differences remain—America gives carte-blanche to countries such as Saudi Arabia. United States indifference to Saudi Arabia’s Wahhabi ideology; its intervention in Yemen; its meddling in Lebanon; the crackdown on pro-democracy protesters in Bahrain as well as on its own sizable Shia minority; and the perceived support of militant groups in Iraq and Syria has only further tarnished America in mainstream Shia opinion. This will disadvantage long-term American strategic interests by failing to approach Iran and other Shia-led movements with practical shared concerns in the Middle East and instead incentivizing them to act as a spoiler against American interests in the region.

While many Shia movements may have differences of opinion with Iran, as long as the Trump presidency uncritically supports Saudi Arabia and the threat of military conflict with Iran remains on the horizon, it is unlikely that any popular Shia group will side with the United States. Shia anxious at the prospect of rising sectarian discrimination and U.S. aggressiveness will throw their weight behind Iran and regional Shia political movements. This further consolidates Iran's position as the center of the Shia world and its long-standing partnership with various Shia transnational movements throughout the Middle East such as the Lebanese Hezbollah, many of Iraq's Popular Mobilization Forces (PMF), and Yemen's Ansarallah (the Houthis) all of whom are engaged in critical regional hotspots.

Such sentiments also apply to Iraq’s notoriously independent Shia clerical institutions (the “marja’iyya”) led by Ayatollah Ali al-Sistani, whose reported rejection of overtures by Saudi Crown Prince Mohammad bin Salman are a clear indication of the deep gulf which exists between the two sides. A willingness to work with al-Sistani and Iraq’s moderate clergy who wish for Iraq to have an independent middle path is a necessary prerequisite to meaningful bilateral relations. For instance, in the past, Sistani has effectively vetoed American policy during critical junctures.

From a historical and structural perspective, many of the armed Shia movements allied with Iran, such as Hezbollah and factions of the Iraqi PMF, do not do so purely on sectarian affinity but rather see Iran as a partner in their grievances against a regional security architecture which has long excluded the Shia. These groups are the product of war and instability and have received support from Iran to organize and effectively assert themselves locally. As long as war and brinkmanship are still on the horizon, it is unlikely that the region's Shia will meaningfully disassociate themselves from Iran. Further, most of the region's Shia have long-standing historical ties and affinity to Iran as a site of pilgrimage, learning, and shared cultural-religious values. Moreover, differences of opinion do not mean that all Shia will accept the Saudi line on Iran. For instance, in Iraq, the cleric Muqtada al-Sadr was widely perceived to be close to the Saudis and UAE, yet he also nonetheless announced a coalition with the Iran-allied Fatah PMF front. And in Lebanon, Hezbollah and its allies made the strongest electoral showing and are formally intertwined with the Lebanese state.

If the United States wishes to cooperate with leading political parties and states of Iraq and Lebanon, it must consider mainstream Shia concerns and undertake a balanced approach with regional powers. Otherwise, America will seem biased towards Wahhabi or Salafi currents which are tied to the Persian Gulf monarchies that have been at the forefront of lauding the administration's policies towards Iran. This will disadvantage potential cooperation with moderate Shia forces such as al-Sistani. Furthermore, American bias in favor of Sunnis will increase tensions with regional powers such as Turkey and Qatar which have recently gravitated closer to Iran in an effort balance against Saudi Arabia. Another example includes Kuwait and Oman also striking a balanced tone for similar reasons. The United States would do well to observe and emulate this delicate balancing act.

Payam Mohseni is the Iran project director at the Harvard Kennedy School for Government’s Belfer Center for Science and International Affairs.

Ammar Nakhjavani is an Iran project associate at the Harvard Kennedy School for Government’s Belfer Center for Science and International Affairs.

Image: U.S. President Donald Trump holds up a proclamation declaring his intention to withdraw from the JCPOA Iran nuclear agreement after signing it in the Diplomatic Room at the White House in Washington, U.S. May 8, 2018. REUTERS/Jonathan Ernst TPX IMAGES OF THE DAY