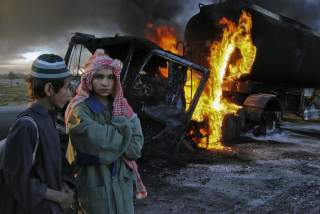 The United States is once again ratcheting up the pressure on Pakistan to fall in line with U.S. policy in Afghanistan by ending the Afghan Taliban’s enjoyment of safe haven. Unsurprisingly, Pakistan is once again pushing back. Amid the mistrust, mutual recrimination, and stale narratives that have increasingly characterized the U.S.-Pakistan relationship in recent years, there is one Pakistani talking point I have heard routinely from officials that should be taken at face value: Pakistan does not intend to fight the Afghan war on Pakistani soil. Although the reality of the situation is dissatisfying, the United States needs a strategy in Afghanistan and policy toward Pakistan based on the best Pakistani behavior it can have, not the Pakistani behavior it wants to have.

The current military-centric U.S. strategy for Afghanistan—largely a bet on continuity, with a modest escalation—depends for ultimate success on reversing Pakistan’s practice of helping enable the Taliban to sustain its insurgency by, among other things, permitting its leadership to operate from Pakistan and facilitating activities of the Taliban’s especially deadly Haqqani element. Although Pakistan also has enabled the counterinsurgency in Afghanistan—in part by serving as the main supply route for U.S. and NATO forces—it does not judge its security interests to be served by going all-in to back a U.S. military strategy that it does not believe will succeed and an Afghan government whose durability it doubts. Pakistan is also unwilling to add the Taliban to its long list of militant adversaries.

The United States has long found logical fault with Pakistan’s calculations, but has proven unable to change Pakistan’s perceptions of its own national interests in its own neighborhood—and not for lack of offering carrots, applying sticks and taking matters into its own hands (see the unilateral U.S. takedown of Osama bin Laden and drone strike on Taliban chief Mullah Mansur, both done on Pakistani soil). One of the constraints on American persuasiveness is the deeply entrenched Pakistani narrative that the United States left Pakistan with a mess next door in the 1990s and cannot be relied upon not to do the same again.

U.S. policy debates during the Obama administration and into the Trump administration have centered on the dilemma that the United States is pursuing a strategy in Afghanistan that both impels it to penalize Pakistan for failing to act in concert with that strategy and limits how far the United States can rationally go in imposing penalties. The United States insists that Pakistani cooperation is essential; if that’s true, then the policy imperative must be to elicit more, not less, cooperation. But the more punitive the American approach to Pakistan, and the more humiliating (from a Pakistani perspective) the rhetoric of demands, the less cooperation is likely. Pakistan would undoubtedly prefer to maintain already dwindling U.S. civilian and security assistance, but it isn’t dependent upon it, and Pakistan’s so-called “all-weather friendship” with China could help it ride out a storm blowing from Washington.

Pakistan is not behaving as it does vis-à-vis the Taliban because that behavior pits it against the United States, but, rather, despite that effect. Consequently, Pakistan should be seen as having already weighed the risks to its relationship with the United States and found them more tolerable than the costs of definitively taking sides in what it views as a civil war in a fragmented society in which the Taliban represents one of the main fragments—and one that is a bulwark against Indian influence in Afghanistan.

Pakistan should also be presumed to have built into that equation the leverage it has to moderate American pressure. It could complicate the U.S. mission in Afghanistan in multiple ways, most easily by constricting or shutting down the ground- and air-supply lines through Pakistan to its land-locked neighbor, or by pushing large numbers of Afghan refugees across the border. Pakistan also may find comfort in the knowledge that the Trump administration’s assertion of an open-ended military commitment to Afghanistan has heightened concerns about the U.S. strategy on the part of China, Iran and Russia, none of which want to see permanent U.S. bases in the country; this dynamic creates potential opportunities for Pakistan to build up other relationships in the region at U.S. expense. But most important, it is hard to imagine any form of enduring sufficient stability in Afghanistan over the objections of Pakistan; Americans will not be in Afghanistan forever, but Pakistan will be forever next door.

Difficult as it is for Washington to work with Islamabad because of the mutual mistrust and diverging perspectives, the United States has real interests in the relationship. Those interests extend beyond the war in Afghanistan and include promoting nuclear security, maintaining ability to help de-escalate India-Pakistan crises, and mitigating spillover risks from Pakistan’s struggle with domestic extremism. Tough though it may be for many focused on the fight in Afghanistan to fathom, it is also plausible over the long term that the United States will want—and need—to work with Pakistan to pursue broader counterterrorism objectives, as it has in the past. Pakistan sits in a region that will continue to be a source of threats, it has genuine security capabilities, and, despite its political weaknesses, it has institutions that function sufficiently well without external propping-up.

If the United States tones down the public shaming, then it is possible that Pakistan will, as in the past, do just enough in response to U.S. demands to temporarily relieve the pressure—but without binding itself to an American military strategy with which it does not concur. But minimal steps will at best have a marginal impact on subduing the Taliban.

There is, however, another play that the United States can make. Nominally, the United States and Pakistan are in agreement that the endgame in Afghanistan must be a political settlement. Trump administration officials have said that getting the Taliban to come to the negotiating table is the goal of the military escalation. For Pakistan, negotiations offer the prospect of seeing their interests sufficiently satisfied through new political arrangements that bring the Taliban into the Afghan polity and reduce overwhelming American influence. Those interests gives Washington something to work with to attract a degree of Pakistani cooperation that it can’t simply compel.

Currently, though, despite the stated commitment to a political endgame in Afghanistan, it is not evident that the United States is vigorously pursuing a political strategy for getting there. If that changes, then it will be important to involve Pakistan in a negotiation process—enough to build Islamabad’s confidence that its interests can be satisfied, giving it reason to invest in producing a result. The United States will be hard pressed to pull off a negotiated settlement—its only realistic exit strategy—without Pakistani assistance.

After years of frustration, finally giving up on the idea that the United States can force Pakistan into alignment with the U.S. military strategy in Afghanistan is understandably distasteful to many American officials who have invested heavily—personally and professionally—in the fight in Afghanistan. The divergences with Pakistan are serious and have had deadly consequences. But the question has to be, what available options have the potential to make the situation better rather than worse?

A realistic approach to dealing with Pakistan does not mean selling out Afghanistan or taking a loss on the substantial U.S. investment in the region. Rather, it is necessary for giving Afghanistan a better shot at a more stable future than the current approach is likely to produce. Additionally, it will establish a basis for long-term U.S. engagement in the region that is sufficient to advance, and proportional to, core U.S. national-security interests.